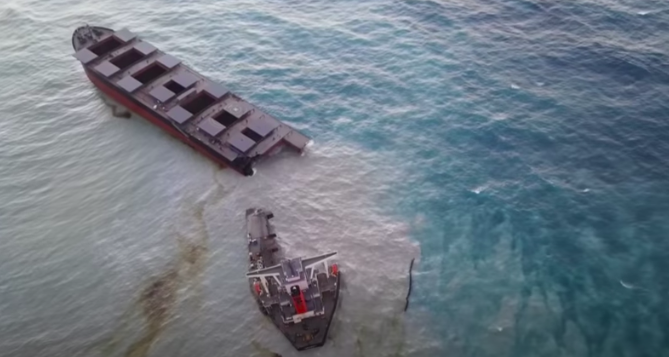 A snap from a Youtube aerial footage of the MV Wakashio broken in two in Mauritius / Video credit: AFP News Agency

Almost seven months after the Japanese capsize bulk carrier MV Wakashio ran aground in an environmentally sensitive area off Mauritius, several scenarios as to what led to the incident have come to the surface, but an official cause of the accident is yet to be determined.

To remind, the bulk carrier MV Wakashio ran aground off Mauritius early in the evening of 25 July 2020, attracting significant media attention for several weeks following the occurrence, as fuel oil started leaking from the vessel in the environmentally sensitive region and adverse weather conditions impeded proper response.

-4 Jul: The Panamanian-flagged MV Wakashio departs from Lianyungang, China, bound for  Tubarão, Brazil, with 20 crew onboard and no cargo, but having 3,894 tonnes of low-sulphur fuel oil, 207 tonnes of diesel and 90 tonnes of lube oil onboard.

-14 Jul: The ship stops in Singapore for fueling.

-25 Jul: The ship runs aground on a coral reef off the nation island of Mauritius in the Indian Ocean. There are no injuries and the crew remains onboard.

-28 Jul: Addressing the Parliament, Mauritius’ Minister of the Environment, Kavi Ramano, says there is no oil spill as a result from the incident, but only traces of hydrocarbons in algae over 300 meters.

-6 Aug: Oil begins to leak from the vessel, while Mauritius authorities are trying to control the spill.

-7 Aug: The island of Mauritius declares a “state of environmental emergency”, fearing of huge damage to the country’s coastal waters and marine wildlife.

–10 Aug: About 1,000 metric tons of fuel have already spilled, with estimates of the remaining oil onboard ranging from 2,500 to 3,000 metric tons. Meanwhile, inclement weather with high waves triggers worries of a potential vessel crack.

-12 Aug: In a race against time, an estimated 3,000 tonnes of fuel are successfully removed from the ship. The fuel is transferred to shore by helicopter and to another ship also owned by Nagashiki Shipping.

-15 Aug: The ship breaks in two with 166 tons of fuel onboard. Waves 4.5 metres high hinder cleanup.

-17 Aug: IMO announces it has deployed an expert, jointly with the UN Office for the Coordination of Humanitarian Affairs (UN OCHA), who is advising the Government of Mauritius on the mitigation of the impacts on the environment and coastal communities.

-19 Aug: NGO Greenpeace warns of the severe environmental consequences after the government’s decision to sink the front part of the vessel.

-22 Aug: Operations to sink the forward part of the ill-fated vessel are completed, despite environmental concerns.

-26-28 Aug: At least 40 dead dolphins gradually wash up on Mauritius’s shore, spurring suspicions that the oil spill is to blame, with officials characterizing the incident a “sad coincidence.”

-29 Aug: Thousands of people demonstrate in Mauritius over the government’s handling of the incident.

-31 Aug: A tugboat working on the wreck site sinks after colliding with a barge in heavy weather, killing at least three.

-18 Dec: Japanese MOL, the charterer of the vessel, releases internal investigation report on the incident, identifying the crew’s unsafe behavior probable cause of the incident, and issues a series of safety measures to prevent such incidents in the future. The measures announced aim, among others, to address the lack of safety awareness and boost ship operation quality.

-6 Jan: A Forbes report suggests that oil major BP supplied unsafe very low sulfur fuel oil to Wakashio before its final voyage causing the ship to experience a serious engine failure and that it has blocked the investigation into the fuel that was being used onboard. The same report claims MOL was aware that the oil exceeded engine safety limits and was concerned during the Wakashio’s final voyage that this fuel could cause engine failure, which they attempted to communicate to the crew.

-12 Jan: BP denies the reports characterizing them as “baseless allegations and insinuations”, confirming it supplied fuel to the vessel, but clarifying that the fuel supplied was fully in line with the specified standard.

-18 Jan: MOL also rejects the allegations, noting there have been no mechanical issues involved in the grounding, which appears “to have been solely due to safety and navigational issues”.

–25 Jan: Satellite data by British satellite analytics company Geollect refuels the debate, revealing the Wakashio appears to have suffered an engine failure prior to its grounding.

Find an aerial footage of the ship broken in two herebelow:

Probable causes – What is known so far

Pending an official investigation report from the respective authorities, MOL has attributed the incident to crews’ overconfidence and complacency. According to the company’s internal investigation, two days before the grounding, on July 23, the vessel changed its passage plan to further reduce the distance from the coast from 5 nm to 2 nm, in order to get a Wi-Fi signal. They also used a nautical chart without sufficient scale to confirm the accurate distance from the coast and water depth, MOL said. Reports emerged in mid-August also revealed that the crew were celebrating a crew member’s birthday at the time of the incident, which has not been officially confirmed.

However, media reports early in the year unveiled the scenario of an engine failure, linking it with unsafe fuel supplied onboard. More recently, Geocollect data allegedly revealed that the Wakashio grounded to a sudden halt in the middle of the Indian Ocean on July 17, three days after fueling in Singapore and eight days before it ran aground. Therefore, there was a period of five-and-a-half hours over 60 miles that is unexplained for the vessel, in which satellite data identified an unusual drifting pattern of the vessel indicating a potential engine failure, a scenario denied by MOL.

The magnitude of global media attention to the incident is not random at all. Reuters quoted unnamed scientists as saying that the spill was likely the worst environmental incident in the history of Mauritius, with effects possibly lingering for decades. The vessel discharged more than 1,000 tonnes of oil into the island’s pristine lagoon, including its Blue Bay Marine reserve, a biodiversity hotspot in the region.

The marine ecosystem of Mauritius is home to 1,700 species, including about 800 fish species, 17 species of marine mammals and two species of tortoises, according to the UN Convention on Biological Diversity. Scientists believe that the spill can affect wildlife on the islands of Mauritius, where people live mainly from tourism.

On top of the ecological disaster, no comprehensive information has been made publicly available yet on the cause of the grounding, the possible long-term impact of the oil spill on people’s health and the environment, as well as on why the bow of the vessel was sunk into a whale’s nursing area. In addition, experts say the government has done little to ensure another oil spill does not occur again.

According to a report issued by The Institute of Security Studies (ISS) in December, the grounding of MV Wakashio showed, as a general lesson learned, that the activation of a national oil spill contingency plan cannot stop the far-reaching impacts of marine pollution incidents. While Mauritius was prepared and took swift preventative actions during the MV Wakashio incident, the report reads, the country was ‘insufficiently equipped’ to handle the unprecedented environmental catastrophe that followed. As such, National Oil Spill Contingency Plans must be revised regularly and must provide for all eventualities.