March 24 marks the 29th anniversary of the Exxon Valdez accident. On this date in 1989, one of the most catastrophic – if not the most catastrophic – oil spills of the 20th century took place. The tanker Exxon Valdez was departing the Port of Valdez, Alaska with a full load of North Slope crude oil, of approximately 1.26 million barrels, destined for Long Beach when it grounded on Bligh Reef in Prince William Sound. About 258,000 barrels of cargo were spilled as eight cargo tanks ruptured, causing one of the most shocking environmental disasters in the history of US.

How did the accident happen?

The US tankship Exxon Valdez had departed the Port of Valdez in Alaska, 1,263,000 barrels of crude oil, when it grounded on Bligh Reef in Prince William Sound, near Valdez, Alaska. At the time of the grounding, the vessel was under the navigational control of the third mate. No injuries, but 258,000 barrels of cargo were spilled resulting in catastrophic damage to the environment.

Specifically, according to a report by the National Transportation Safety Board (NTSB), the third mate and the master of Exxon Valdez were on the bridge, moments before the accident. The two men were discussing about the route of the ship, when the master told the third mate that he would leave the bridge for a little while. He also instructed him to inform him (the master) when the ship was about to return to the traffic lanes, leaving the third mate in charge of this.

A little later the third mate ordered a hard right, to return to the traffic lanes and informed the master, through a phone call. When the call ended the third mate noticed that the course of the vessel had not changed. Namely, he said that despite the fact that the ship was swinging right, the radar did not show that. After a few moments he called again the master telling him “I think we are in serious trouble”.

At the end of the call, the ship hit the bottom and it sustained a series of sharp jolts for about 10 seconds. The third mate then tried to steer left, but because of the hard right swinging, the vessel could not turn left. When the ship stopped, the third mate reported that he smelled gas and crude oil vapor.

About 258,000 barrels of cargo were spilled in the sea. The damage to the vessel was estimated at $25 million, the cost of the lost cargo at $3.4 million, and the cost of the clean-up of the oil spill at $1.85 billion.

The clean-up operations started shortly after the accident using booms and skimmers. However, not all of the equipment was available at the time, and the thickness of the oil damaged some of it. As a result, and despite the help that many volunteers offered, only 10% of total oil was actually completely cleaned. Namely, studies have shown that more than 26 thousand gallons (98 m3) of oil remain in the contaminated shoreline, declining at a rate of less than 4% per year. Until today, oil remains on the beaches and has the same chemical compounds as those it had 11 days after the incident. 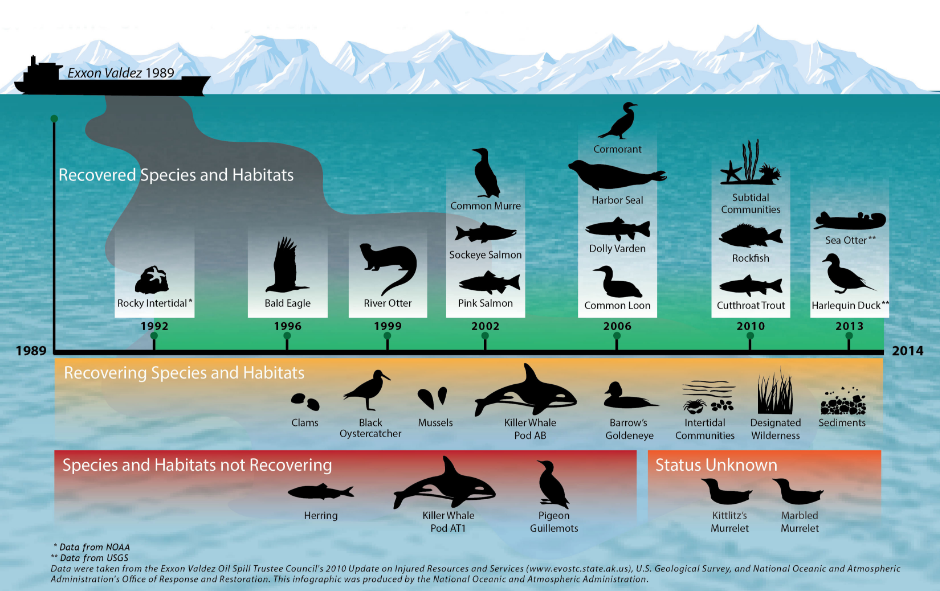 When NTSB released the investigation about the accident, it focused on the failure of the third mate to maneuver the ship correctly, because of fatigue and excessive workload. The third mate could have had as little as 4 hours sleep before beginning work on March 23 and only a 1 to 2 hour nap in the afternoon. Thus, at the time of the grounding, he could have had as little as 5 or 6 hours of sleep in the previous 24 hours.

Another major issue is that the vessel did not have the proper amount of crewmembers working onboard. Evidence showed that watchkeeping safeguards on the Exxon Valdez were not on an appropriate standard because of the lack of crew.

The Safety Board considers the reduced manning practices of the Exxon Shipping Company generally incautious and without apparent justification from the standpoint of safety. The financial advantage derived from eliminating officers and crew from each vessel does not seem to justify incurring the foreseeable risks of serious accident.

Moreover, the investigation found that the company’s programs did not have measures in order to ensure the crew’s safety. In fact, NTSB concluded to the following:

An interesting part of the investigation is the finding that the master failed to provide a proper navigation watch because of an alcohol problem. The master's supervisor did not know that the master had an alcohol dependency problem before his hospitalization.

However, when the supervisor learned about this problem, he should have referred his case to the medical department. The personnel documents provided by Exxon showed that a follow-up treatment program was recommended by the attending physician at the hospital. The master was given a 90-day leave of absence, but there are no documents showing that the recommended treatment program was followed or that the master’s progress was monitored by the management. 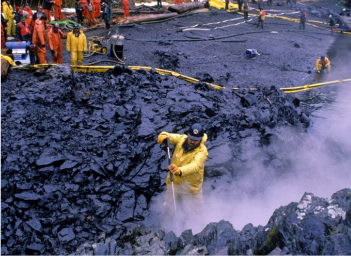 The Exxon Valdez accident highlighted how important is the crew’s proper rest when operating a vessel.