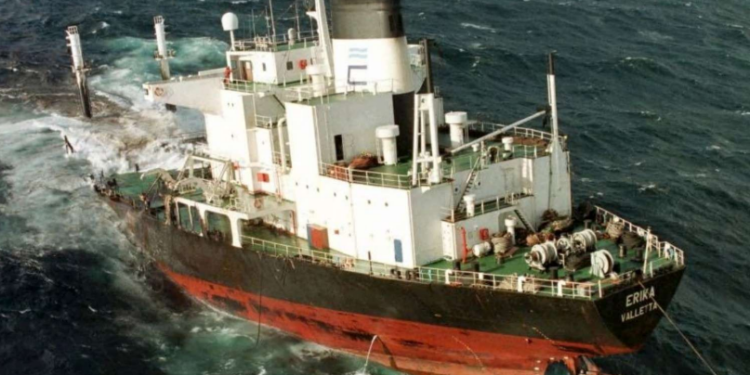 On 12 December 1999, the Erika, a 25 year-old single-hull oil tanker, broke in two off France, polluting almost 400 km of French coastline and causing unprecedented damage to marine environment, claiming the title of one of the most major environmental disasters of recent years.

In the early afternoon of the 11th December 1999, Erika experienced a structural failure as she was crossing the Bay of Biscay in heavy weather. The vessel first began to list heavily and then, after the list was corrected, broke in two on 12 December, some 40 nautical miles off the southern tip of Brittany.

As a result, the vessel foundered some 30 nautical miles south of the Pointe de Penmarch, causing major oil spill in French waters.

The entire crew was rescued without injury after a rescue operation carried out by the French navy with CROSSA.

As a result of the sinking, a large proportion of the vessel’s cargo and bunkers spilled into the sea. Namely, according to ITOPF data, during the cleanup operation, between 190,000 and 200,000 tonnes of oily waste was collected from shorelines and temporarily stockpiled.

In the days following the crash, French planes tracked the oil slicks drifting at sea, one of which was 15 km long.

Even worse, the heavy weather with tides and currents made some of the slicks to “throw up very high on the foreshore, turning the spill into an ecological catastrophe.

‘It was very difficult to contain this pollution because of the type of cargo being carried and because of the severe weather conditions and it eventually soiled several hundred kilometres of coastline from Brittany down to the Ile de Ré,’

…according to the official report of Permanent Commission of enquiry into accidents at sea (CPEM).

The oil pollution affected about 400 km of coastline. The main environmental impact of the spill was on sea birds. Almost 74,000 oiled birds were recorded ashore along the coast of the Bay of Biscay, of which almost 42,000 were dead, making Erika to claim he tile of the ‘biggest ever ecological disaster for Europe’s seabirds.’

The French appeals court in March 2010 confirmed the ruling stating that “the accident was a direct consequence of corrosion on the boat directly related to the lack of servicing.”

As the official CPEM report emphasizes, the ERIKA was certainly an old ship, but she was used above all for transporting black products at freight rates which were insufficient to cover costs, unless these costs, including maintenance costs, were drastically reduced.

The ERIKA had always been “sensitive” to corrosion, but she really began to fall into disrepair when No.4 tanks and especially No.2 wing tanks became dedicated ballast tanks.

This work was also a decisive factor in the sequence of events leading up to the casualty, the report concludes. Modifications of the stress distribution in the hull may have resulted from the work carried out due to:

The weakening of the structure of section No.2 of the Erika was thus due to insufficient maintenance and the corresponding rapid development of corrosion, leading to a succession of ruptures which caused the whole structure to collapse, when the ship encountered heavy weather.

This factor was decisive; to such an extent that the other factors can be considered as secondary. In short, the state of the vessel and her rapid deterioration in the last hours of her life were such that nothing could have prevented the disaster.

In 2008, French court ruled that the owner was “guilty of negligence” for the sinking and ordered it to pay millions of euros in damages for the environmental disaster. The oil major was fined 375,000 euros ($556,100) and told to pay a share of 192 million euros in damages to civil parties, including the French state.

Additionally, the ships’ classification society, also held guilty of imprudence and was fined another 375,000 euros.

The representative of the shipowner and the president of the management company were sentenced to pay a fine of €75 000 each.

The Erika trial was one of the biggest environmental cases to come to court in France, noting a landmark for environmental groups as it recognized that a polluter could be liable for the ecological damage caused by oil spills. Eleven others, including the ship’s captain, were found not guilty.

In March 2010, the owner lost their appeal to overturn the court’s decision.

The organization has so far paid more than EUR 172 million in compensation and 200 million to clean up the spill.

Erika oil spill vastly engaged public concern about the safety of maritime transport, highlighting the risk associated with old and poorly maintained ships and the necessity of regulatory harmonization and enforcement of maritime safety.

The accident triggered EU to adopt a series of stringent preventive legislation, known as the Erika I and II packages, acting as the ‘Final push for Single Hull Tanker Regulations’.

As such, the major casualty became a good example of how public anger can pave the way for change and ensure that people learn from oil spills. According to a 2010 paper, the Erika disaster was ‘a great example of how people can learn quickly from their mistakes’.

While there was some start in the right direction by eliminating single‐hull ships after Exxon Valdez, there was a uniform effort to push that through quickly after the Erika.