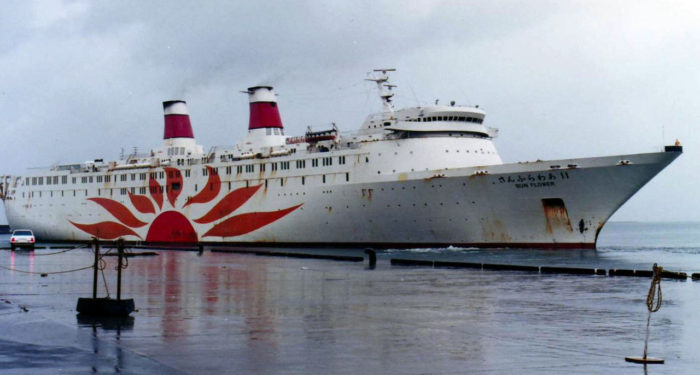 The Philippines has a long history of fatal maritime accidents. This time, SAFETY4SEA focuses on the deadly sinking of the ‘Princess of the Orient’. The ferry sank off Fortune Island, near the provinces of Cavite and Batangas, on September 18, 1998, claiming the lives of 150 people. Extreme weather conditions, along with ‘’erroneous maneuvering of the vessel by the captain’’, were the immediate causes of the accident.

On September 18, 1998, the Princess of the Orient starts its voyage from Manila to Cebu during typhoon Vicki, carrying a total of 388 passengers.

Two hours after leaving the Manila harbor, the ferry suddenly tilted to its port side and was unable to recover. Initially, a list of three degrees was observed at the portside, which had continuously increased. At the same, time, winds and waves were hitting the ship on its starboard side. The waves were at least seven to eight meters in height and the wind velocity was 25 knots.

It eventually capsized at 12:55 a.m. near Fortune Island and sank, with 150 people losing their lives.

Napoleon Sesante, then a member of the Philippine National Police (PNP) and a lawyer, was one of the passengers who survived the sinking, and provided a description of what was happening that day. Mr. Sesante sued Sulpicio Lines, which owned and operated the vessel, for breach of contract and damages.

In his complaint Mr. Sesante claimed that the M/V Princess of the Orient left the Port of Manila while Metro Manila was experiencing stormy weather. He had also noticed that the ship was listing starboard, while other passenger were panicking. In his complaint he also describes that the vessel was hit by big waves.

As for the survivors, they floated at sea for more than 12 hours before rescuers were able to reach them.

According to the report of the Board of Marine Inquiry (BMI), ‘the erroneous maneuvering of the vessel by the captain during the extreme weather condition had been the immediate and proximate cause of the sinking.’

However, when the ship started sailing, it was navigating smoothly towards Limbones Point, experiencing normal weather.

When it entered the Manila Bar, the waves were observed to be relatively small to endanger the safety of the ship.

However, upon leaving Limbones Pt., and heading towards the Fortune Island, misfortune struck the ship.

Initially, a list of three degrees was observed. The listing of the ship to her portside had continuously increased. It was at this point that the captain had misjudged the situation.

As the Supreme Court of Manila noted, while the vessel was facing extreme weather, ‘prudent judgement would dictate that the Captain should have considerably reduced the ship’s speed.’

In addition, due to the excessive movement, the solid and liquid cargo below the decks must have shifted its weight to port, contributing to the tilted position of the ship.

A little later, the Captain ordered to reduce the speed of the ship to 14 knots, while also ordering to put ballast water to the starboard-heeling tank, hoping to stop the continuous listing of the ship. However, this action was in vein, as the vessel was already listing between 15 to 20 degrees to her portside, and was about to lose its stability.

In spite of being in a dangerous situation, the Captain performed various starboard maneuvers, which added to the ship’s tilting. As the ‘Princess of the Orient’ was already inclined to an angle of 15 degrees, along with the instantaneous movement of the ship, the cargoes below deck could have completely shifted its position and weight towards portside.

On October 12, 2001, the Regional Trial Court (RTC) decided in favor of Napoleon Sesante:

Judgment is hereby rendered in favor of plaintiff Napoleon Sesante and against defendant Sulpicio Lines, Inc.

The court ordered the company to pay Mr. Sesante:

More specifically, explaining its decision, the RTC observed that the Sulpicio Lines:

The company sought reconsideration, but the RTC only partly granted its motion, reducing the temperate damages from P500,000.00 to P300,000.00.

As a result, the company appealed in the Court of Appeals (CA). On June 27, 2005, the CA held the RTC’s decision, but lowered the temperate damages to P120,000.00, which approximated the cost of Mr. Sesante’s lost personal belongings. It also judged that in spite of the seaworthiness of the vessel, Sulpicio Lines remained civilly liable because its officers and crew had been negligent in performing their duties.

Finally, the company took the case to the Supreme Court of Manila, which however decided that the appeal lacked merit.

Sulpicio Lines has been involved in several other maritime casualties, including the Dona Paz sinking, which is the deadliest ever peacetime shipping disaster, with 4,386 fatalities. It is estimated that four marine tragedies involving Sulpicio vessels have resulted in death of about 5,000 people in the last decades.

Timeline of the deadliest shipping disasters in the Philippines

Dec 1987 – A total of 4,386 die in world’s worst peacetime shipping disaster, after Dona Paz and an oil tanker collide off Mindoro Island.

July 1993 – 279 pilgrims drown when an overloaded wooden temple, mounted on three boats, collapses during a religious festival as it is being towed along the Bocaue river, 20 km (12 miles) north of Manila.

Sept 1998 – Almost 200 die when the ferry ‘Princess of the Orient’, sister ship of Dona Paz and Dona Marilyn, sinks in stormy seas near Cavite and Batangas.

April 2000 – At least 138 drown after the ML Annahada sinks off Jolo island in the southern part of the country.