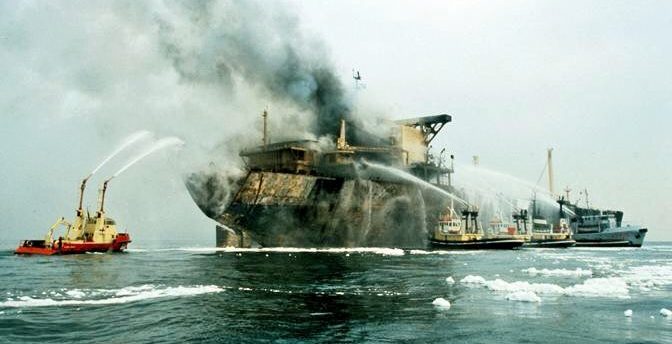 In April 1991, a fire onboard the Italian passenger ferry ‘Moby Prince’, Italy’s worst merchant marine disaster since the end of World War II, broke out. The incident, resulting in death of all but one person onboard, highlighted how miscommunication in emergency situations can be disastrous.

At 22:03 on 10 April 1991, the Moby Prince left Livorno, heading to Olbia with 65 crew and 75 passengers onboard. While taking the route out of the harbor, the ferry’s prow hit the anchored oil tanker Agip Abruzzo and sliced through its tank number 7. The tank was filled with 2,700 tons of Iranian light crude oil.

Some oil spread on the surface of the sea and caught fire, but around 100 to 300 tons was sprayed on to the ferry by the impact. A fire quickly engulfed the ferry.

At 22:25, the ferry’s radio operator sent a Mayday from the portable VHF. He did not use the fixed radio set, as he was not at his post during the disaster, as was later confirmed by the location of his corpse.

Meanwhile, the crew mustered the passengers in the De Luxe hall, the ship’s safe meeting point equipped with fireproof doors and walls, awaiting a quick rescue by authorities.

However, rescuers were alerted by repeated calls from the Agip Abruzzo, while the Mayday from the Moby Prince went unheard. As such, when rescue arrived, it was too late. By the time the crew understood that help was not coming quickly, the hall’s surroundings were engulfed in flames and no escape route was available.

From the 141 people onboard, the 140 died as a result from the accident. The cause of death in most cases was CO poisoning, resulting from combination of gases evaporating from the crude oil, as well as thick black smoke from the oil and plastics of the ferry’s fittings. Many had survived the fire but fell unconscious. This indicates that many would have survived had the rescue arrived earlier.

Notably, the only survivor from the crew and passengers was a young cabin boy, Alessio Bertrand from Naples, who was found hanging in the stern’s railing one hour after the casualty.

Tons of oil were spread in the water after the collision with the tanker. In the collision, the tanker got stuck to the ferry. The tanker commander ordered full power to the engines and managed to separate the ships, but unwittingly worsened the oil spill.

As such, the accident ended up as one of the two worst environmental disasters in Italian history, along with the explosion of the tanker Amoco Milford Haven on the following day in an unrelated accident near Voltri.

According to ITOPF, about 130km of the surrounding coastline (mainly to the north) became polluted with oil, over the next few weeks.

Immediately after the disaster, the Livorno public prosecutor began proceedings for failure to assist and culpable homicide. Criminal charges were brought against several crew members from the tanker, officials from the port and the owner of the ferry company, but everyone was absolved of blame.

-Weather conditions: The court accepted that a phenomenon called advection fog played an important role in the collision, preventing the Moby Prince from spotting the tanker, although many qualified witnesses later reported that visibility was good, but the smoke generated after the collision was mistaken for fog.

-Tanker position: The first mayday call by the Commander of Agip Abruzzo is clearly audible and reported in a position inside the no-anchor-zone, probably in a forbidden parking area within the ferry’s legitimate route. However, due to contradicted reports from the commander and the loss of the Captain’s Logbook, it remains unclear until today if the tanker was anchored illegitimately.

However, the most significant cause of death for so many people related to slow response of rescue forces. The repeating Mayday from the Moby Prince went unheard. The commander of Agip Abruzzo misreported the incident, asking the rescuers to hurry to the tanker, as he had not realized the ferry was involved.

The issue of misunderstanding and poor communication was highlighted in view of the high death toll. On the aftermath, the response of the crew was found to be in accordance with emergency procedures, regarding the point that the crew had taken the passengers to an area of the vessel protected by fireproof doors and walls, where they were to await rescue. However, rescuers never reached these passengers within the window for possible evacuation, due to misunderstanding as to what had happened and which vessel was in distress.

It was also suggested that the distress calls from Moby Prince were missed because the radio operator was using a portable transmitter with a weak signal, rather than the vessel’s fixed radio equipment.

Additionally, a rescue helicopter early in the next morning filmed a corpse lying on its back near the ship’s stern. The corpse was not charred, despite flames. However, later firemen found this body burned. This indicated that many people did not die in the flames, but slowly from suffocation, which means that there was sufficient time to be rescued.

A videotape filmed by a passenger shortly before the collision was found a year later, confirming that the flames were quite tolerable where the passengers were sheltered, and a quicker rescue operation could have saved many lives.