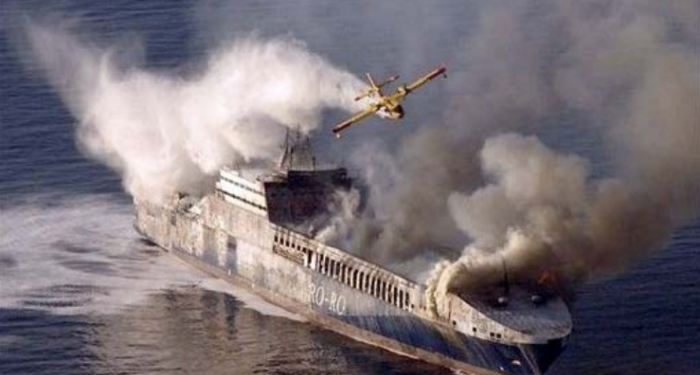 On July 23 1998, a destructive fire took place on board the car carrier “Eurasian Dream”. The fire spread quickly, and despite the efforts from the crewmembers and fire-fighters, the vessel and a large amount of its cargo became a total loss.

While the “Eurasian Dream” was discharging cars in Sharjah in July 1998, a fire broke out on one of the car decks. The vessel had 12 car decks, which were separated into five fire zones. On the day of the accident, the ship was discharging cars and was bunkering simultaneously. According to the third officer, everything started when a fire started on No. 4 deck where a service truck was being used to jump-start a vehicle. The efforts to control the fire started as soon as the fire alarm sounded, in order to control it with fire extinguishers and hoses. However, the efforts were unsuccessful.

The fire that started in the vehicle on No. 4 deck caused the ship to be abandoned, the cargo destroyed and led to a total loss.

Although the precise circumstances are not be ascertained, Steamship Mutual reports that the fire was caused by the charterers’ stevedores who were refueling and jump-starting vehicles at the same time using batteries on a pick-up truck.

However, Judge Cresswell J. also decided that the vessel was unseaworthy as the crewmembers and the owners did not exercise due diligence.

The exercise of due diligence is equivalent to the exercise of reasonable care and skill. Lack of due diligence is negligence and in this case there were numerous failures and errors of judgment that amounted to professional negligence listed above under the headings ‘The Vessel’s Equipment’, ‘Competence/Efficiency of the Master and Crew’ and ‘Adequacy of the Documentation Supplied to the Vessel’.

As the fire could not be container or extinguished, it destroyed the vessel’s cargo of new and second-hand vehicles and made the ship a constructive total loss.

The case in the court

When the case was heard in the Commercial Court, Cresswell J. concluded that the vessel was unseaworthy before and during its voyage. The Judge decided this on the base that “Eurasian Dream” was not properly manned, as the master and crew were not competent regarding the vessel and fire equipment. He also said that the ship was not suitably equipped, while the documentation supplied to the vessel by the managers was not enough.

The vessel was therefore unseaworthy, as if the owner knew these facts, he would not have allowed the vessel to start the journey. Creswell J. concluded that the defendants did not prove that they exercised the proper due diligence to make the ship seaworthy.

What is also important, despite the fact that there was no requirement for the vessel to be ISM-certified and the judge did not specifically refer to the ISM Code, the problematique “systems” were in line with the ISM Code. Thus, he applied the “ISM test” to detect unseaworthiness status of the ship.

It also must include a safety policy with procedures for reporting accidents and non-conformities with the code and a policy to protect the environment. Safety matters regard items such as properly trained crew, good communication on board and safe practices in ship operation.

The shipowning company has to make sure that its crew understand the rules, implement any training required to run the system and establish program for drills to prepare for emergency actions.

Thus, the judgement of Cresswell J. that if the Safety Management System is inadequate, the shipowner can be accused that he did not exercised due diligence to ensure the ship is seaworthy.

Once again, the human element played an important role in the accident. As Judge Cresswell J. said, the fire was relatively small and could have been extinguished if the crew had been properly trained, equipped and led. This highlights the importance of proper training on board ships for emergencies.

Namely, according to Steamship Mutual, the Master had never previously commanded a car carrier and his only preparation for the voyage was a short general induction process because of lack of time. He was not properly trained in cargo operations and especially in car carriers.

What is more, fire-fighting procedures must be understood by all crew through training and drills, as only having manuals of general nature and an untrained crew is not recommended.

In addition, shipowners must always make sure that their ship is seaworthy before starting its journey. In this case, the court decided that the shipowners did not exercise the due diligence needed, and so the ship began its journey being unseaworthy.

Finally, ships must have the right equipment on board and in the right amount. In “Eurasian Dream” when the fire broke out, 3 of the total 4 walkie talkies on board were being used by crew involved in bunkering and the Judge said that this number was insufficient for the purposes of a car carrier, despite the fact that SOLAS provisions were satisfied. Cresswell J. based this decision on the fact that compliance with SOLAS does not guarantee that a vessel is seaworthy.