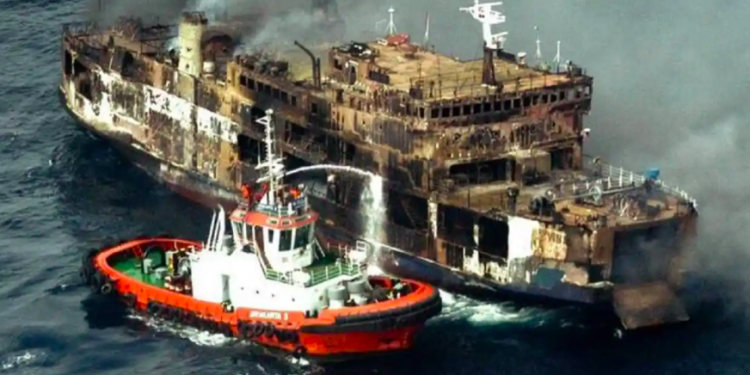 Undoubtedly, Titanic is the most famous shipwreck for over 100 years, but its death toll was only one third of the world’s deadliest shipping accident that took lives of over 4,000 people. It has been over 34 years since the Doña Paz ferry collided with a tanker, burnt and sank in Philippines waters five days before Christmas, adding the darkest page in the country’s maritime history.

Named by National Geographic as “Asia’s Titanic” and by Time magazine as “the deadliest peacetime maritime disaster of the 20th century”, the casualty is an interesting case study of how complacency and poor safety standards can lead to unprecedented tragedies.

In the early morning hours of 20 December 1987, the Philippines-flagged passenger ferry Doña Paz departed from Tacloban, Leyte Island, for the Philippines capital of Manila, with a stopover at Catbalogan, Samar. While at Dumali Point, along the Tablas Strait, at 22:30 and as most passengers were sleeping, the ferry collided with the oil tanker MT Vector. The tanker was en route from Bataan to Masbate, carrying 1,041 tonnes of gasoline and other petroleum products.

The collision and the flammable cargo onboard the tanker sparked a fire that rapidly spread onboard Doña Paz. After the incident, survivors described sensing the crash and an explosion, causing panic on the ship. A blackout left the ship without lights and no life vests could be found onboard. With lack of guidance by the panicked crew, the passengers had to choose if they would stay onboard the fire-stricken vessel, or they would jump on the flaming waters around the ship. Eventually, it took Doña Paz only two hours and the Vector about four hours to sink under the waters of Tablas Strait.

Despite not included in the ship manifest, an estimated total of 4,386 people perished in the disaster and only 26 were rescued, including 24 from Doña Paz and 2 crew members from Vector’s 13-man crew. Most survivors sustained burns from jumping into the flaming waters. None of the crew of Doña Paz survived. Until today, the death toll of 4,386 people remains the largest ever recorded in a single maritime incident in peace time.

A 25th survivor from Doña Paz, Valeriana Duma, was never accounted for by officials, but revealed herself in a TV program in 2012, 25 years after the accident. Aged 14 at the time of sinking, she was the youngest passenger of Doña Paz to survive.

The fatal incident was result of a series of safety malpractices. In 1999, the Supreme Court of the Philippines ruled that it was the owners of Vector who were liable, as the ship was found unseaworthy and operating without a license, a lookout, or a qualified master.

However, the official investigation by Philippine Coast Guard also revealed that none of the Dona Paz crew members were at their posts when the collision occurred, while only one apprentice was monitoring the ship’s bridge at the time. Other officers were either drinking beer or watching TV in the recreation room, while the captain was watching a movie in his cabin. The crew found themselves unable to guide evacuation efforts onboard and this was compounded by the unavailability of life vests that were locked in deck lockers. No distress signal was sent out.

In addition, the magnitude of death toll was attributed to overloading, a common malpractice in the ferry sector. The official passenger manifest of Doña Paz recorded 1,493 passengers and 59 crew members, but amid the Christmas season, it is estimated that the ferry was carrying close to 4,000 people at that night, despite its capacity being for 1,518 passengers.

It becomes apparent that the incident is an unpleasant mix of corruption practices -that allowed illegal purchase of extra tickets onboard amid Christmas season-, poor oversight by authorities -that allowed such corruption practices- inadequate safety culture onboard -that led to the collision- and lack of coordinated response that made SAR operations to start after 8 hours.

Despite being the deadliest shipping incident, the sinking of Doña Paz is only one of a long list of disasters in Philippines’ heavy maritime history. Notably, from 1972 to 1987, when the Doña Paz accident occurred, there were 80 collisions, 177 sinkings and 53 shipboard fires in the country’s waters that resulted in the deaths of more than 4,000 people. What is interesting is that specifically the owner company of Dona Paz was involved in a total of four deadly shipping accidents, resulting in death of about 5,000 people in 11 years:

Earlier, in 1979, owned by the same company but named “Don Sulpicio”, the ship suffered a major fire that led it to be declared a constructive loss. However, the ship was refurbished and came back to service under the name “Doña Paz”. At the time of the accident, it was already 24 years old. Although the marine inquiry and the court ruling concluded that the Dona Paz owner was not to blame for the tragedy, overall evidence reveals some form of poor safety culture in the company’s history. In 2015, the CPC of the company was suspended. Now, it operates under different name and is limited in cargo services.