The sinking of the container ship 'El Faro' in October 2015, claimed the title of one of the biggest marine tragedies in the recent US history. The ship had sailed directly into the path of Hurricane Joaquin, with NTSB and USCG noting that the key cause of the accident was the Captain's failure to handle the ship against the storm and make appropriate use of weather data. As a result, all those on board perished in the sinking.

At the time of the sinking, EL FARO was on a US domestic voyage with a full load of containers and roll-on roll-off cargo bound from Jacksonville, Florida to San Juan, Puerto Rico.

As EL FARO departed port on September 29, 2015, a tropical weather system that had formed east of the Bahamas Islands was rapidly intensifying in strength. The storm system evolved into Hurricane Joaquin and defied weather forecasts and standard Atlantic Basin hurricane tracking by traveling southwest. As various weather updates were received onboard EL FARO, the Master directed the ship southward of the direct course to San Juan, which was the normal route.

The Master’s southern deviation ultimately steered EL FARO almost directly towards the strengthening hurricane. As EL FARO began to encounter heavy seas and winds associated with the outer bands of Hurricane Joaquin, the vessel sustained a prolonged starboard list and began intermittently taking water into the interior of the ship. Shortly after 5:30 AM on the morning of October 1, 2015, flooding was identified in one of the vessel's large cargo holds.

At the same time, EL FARO engineers were struggling to maintain propulsion as the list and motion of the vessel increased. After making a turn to shift the vessel’s list to port, in order to close an open scuttle, EL FARO lost propulsion and began drifting beam to the hurricane force winds and seas.

At approximately 7:00 AM, without propulsion and with uncontrolled flooding, the Master notified his company and signaled distress using EL FARO's satellite distress communication system. Shortly after signaling distress, the Master ordered abandon ship. The vessel, at the time, was near the eye of Hurricane Joaquin, which had strengthened to a Category 3 storm. Rescue assets began search operations, and included a US Air National Guard hurricane tracking aircraft overflight of the vessel’s last known position. After hurricane conditions subsided, the US Coast Guard started additional search operations, with assistance from commercial assets contracted by the vessel’s owner. The search located EL FARO debris and one deceased crewmember. No survivors were located during these search and rescue operations.

Captain’s failures under the microscope

As NTSB explained in a digest report, from early in the voyage, the captain made decisions that put his vessel and crew at risk, including:

What is more, the captain continually referred to hours-old weather information from BVS. Watchstanders on the bridge were routinely getting more current information from the Sat-C terminal and from programs on satellite radio. 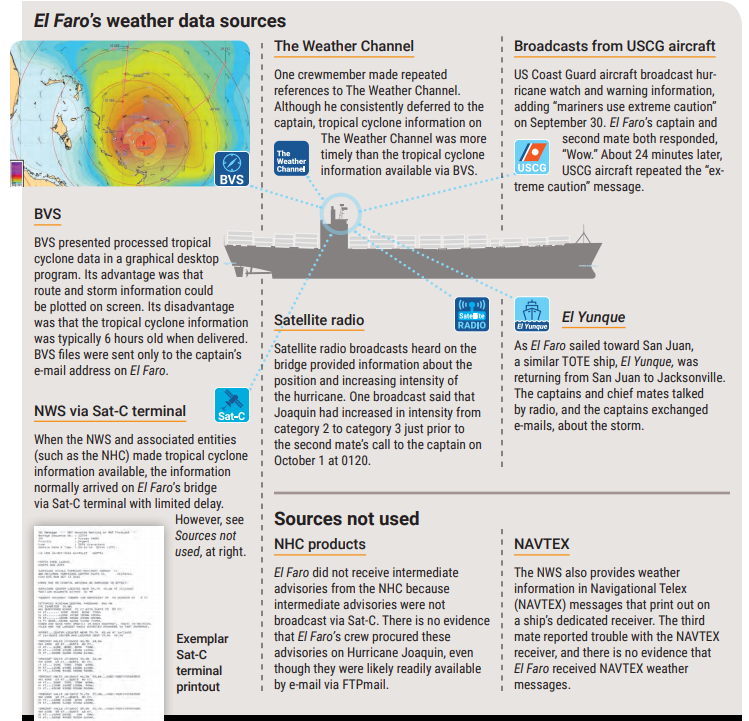 In addition, after the ship lost propulsion, the captain continued to voice his expectation that propulsion would be restored. The general alarm did not ring until 0727 and the captain did not muster the crew until 0728.

On top of that, two crew of the bridge suggested that they disagreed with the captain's decisions, but the captain disregarded their concerns. Although bridge resource management stresses assertiveness, the traditional maritime culture emphasizes on the captain's authority onboard. TOTE had not effectively implemented BRM which involves modernizing centuries-old roles. 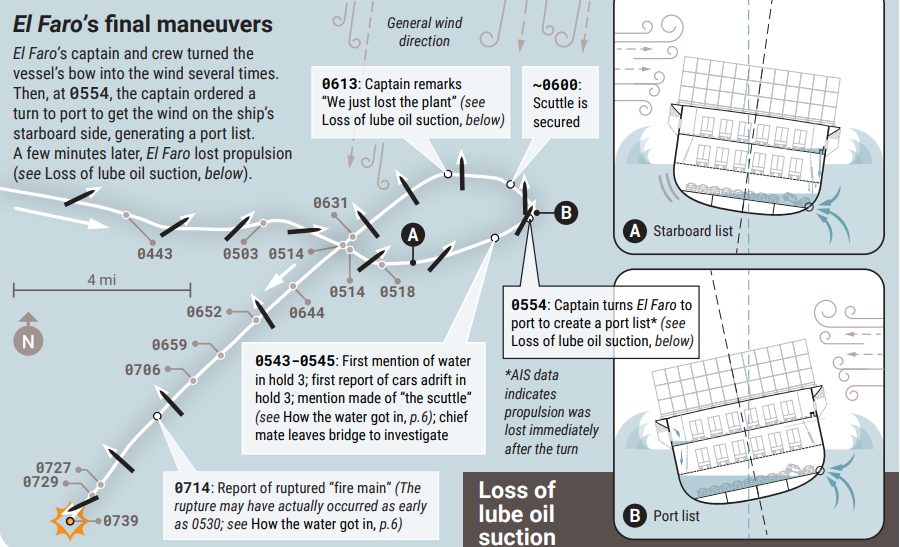 Despite the fact that the captain’s actions played a significant role in the accident, USCG’s report identified more factors that contributed as well. Specifically:

When the US Coast Guard published its final report on the accident, it also proceeded to certain recommendations. Among others, USCG recommended that Commandant direct a regulatory initiative:

Speaking about what the industry has learned after the EL Faro sinking, Anastasios Chrysikopoulos, Chief Officer at Maran Dry Management Inc., said that the study of human factors is of much importance to understand how to facilitate the people working on board.

Some of the human attributes like professionalism are hard to train, but such attributes can be guided by company procedures and regulations

He added that well defined and structured company policies and regulations can also assist the crew in vital decision-making situations to choose between efficiency and thoroughness.

In the El Faro case the crew and particularly the captain’s decisions were influenced by the human element, but if the company had established an appropriate safety culture within the company, some negative influences could have been avoided

In addition, in an exclusive interview with SAFETY4SEA, Rear Admiral John P. Nadeau, Assistant Commandant for Prevention Policy, US Coast Guard, highlighted that the adoption of a proactive safety culture, remains the number one priority.

As he explained, this incident is a call to action for the entire maritime community, as it was caused by poor seamanship, as well as a failure of the safety framework that should have triggered a series of corrective actions, which could have prevented it.

As he explained, this incident is a call to action for the entire maritime community, as it was caused by poor seamanship, as well as a failure of the safety framework that should have triggered a series of corrective actions, which could have prevented it.

We should all honestly assess our own safety management and oversight responsibilities and ask ourselves if we’ve truly adopted a safety mindset and seek continuous improvement, or if we’re simply doing the minimum necessary to maintain compliance

Last year, the US House of Representatives approved a legislation to address maritime transportation safety issues raised by the El Faro sinking.

The Save Our Seas Act combines several pieces of bipartisan legislation recently approved by the Transportation and Infrastructure Committee, including:

The El Faro sinking is now considered one of the biggest marine tragedies in the recent US history. Poor seamanship, inadequate training, and wrong decisions played a key part. However, the industry must learn from this tragic accident, in order to prevent similar ones in the future, and protect seafarers.