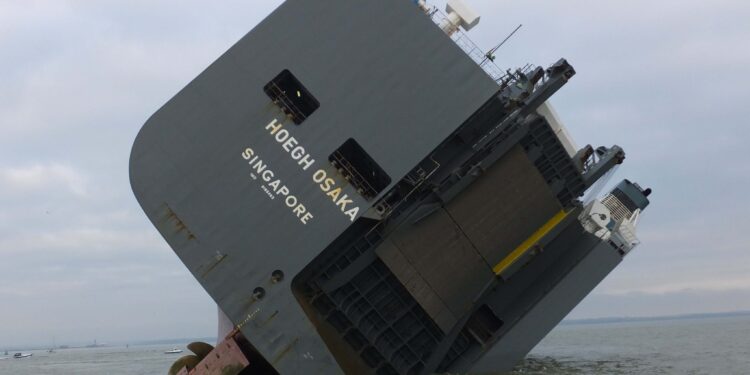 In January 2015, the car carrier ‘Hoegh Osaka’ listed off south England due to stability issues, leading to cargo damage of over 400 units. Investigation showed that, despite a change in its itinerary, the plans for cargo loading had not been changed and no calculation of the vessel’s stability had been made, a practice which was highlighted as a common malpractice in the car carrier sector.

In the evening of 3 January 2015, the Singaporean-flagged pure car and truck carrier (PCTC) ‘Hoegh Osaka’ departed Southampton, UK, where it was loaded with a cargo of buses and cars, heading to Bremerhaven, Germany. It is noted that the ship’s itinerary had been modified, as Southampton was supposed to be the last port that the ship would visit, after Hamburg and Bremerhaven. At about 21.02, as the ship entered the Thorn Channel, the pilot requested that the ship’s speed to be increased.

While turning to port around the Bramble Bank a few minutes later, the ship developed a significant starboard list. As the list increased in excess of 40º, the ship lost steerage and propulsion, and subsequently drifted aground on Bramble Bank. There was neither pollution nor casualties from the incident, as all crew members were safely evacuated, but a cargo shift as a result from the listing caused a hull breach and flooding. The ship was later successfully salvaged.

Find a video brief of the accident here:

Stability modelling and analysis following the accident identified inadequate stability as the key cause of the incident, as no departure stability calculation had been carried out on completion of cargo operations and before Hoegh Osaka sailed. Despite a positive stability on departure, it is estimated that its condition did not comply with IMO stability requirements, while the actual cargo weight and stowage were significantly different to the final cargo tally supplied to the ship.

Another major safety issue identified by the official investigation report was the fact that ballast tank quantities were estimated onboard and differed significantly from actual tank levels and, secondly, that the chief officer did not allow for cargo unit Vertical Centre of Gravity when calculating the stability condition, with UK MAIB evidence suggesting that he was re-entering the cargo figures into the loading computer as Hoegh Osaka was proceeding along Southampton Water.

The official investigation report summarizes the key cause of the incident:

“Hoegh Osaka’s itinerary had changed from its routine loading rotation between three north-west European ports. The actual cargo weight and stowage were significantly different from the final cargo tally supplied to the ship. Ballast tank quantities were estimated onboard and differed significantly from actual tank levels. Cargo unit vertical centres of gravity were routinely not allowed for in the ship’s calculated stability condition. These factors all combined to result in the ship leaving Southampton with insufficient stability for the voyage.”

The incident highlighted a major routine malpractice of the car carrier sector regarding the omission of an accurate departure stability assessment. According to MAIB, the fundamental requirements for establishing before departure that a ship has a suitable margin of stability for the intended voyage had been eroded onboard Hoegh Osaka “such that unsafe practices had become the norm” and evidence suggests that this is a common practice in the whole sector. While the IMO recognized a need to introduce a SOLAS requirement for masters of passenger/ Ro-Ro ships to always determine the ship’s stability condition by calculation on completion of loading and prior to departure, there is not a similar requirement for ships in the PCC/PCTC sector.

Assessing a ship has adequate stability for its voyage upon completion of cargo operations and before it sails is a fundamental principle of seamanship that must not be neglected,

…UK MAIB noted after the incident.

Another key takeaway concerns the debate of human error versus reliance on technology. The incident highlighted that a loading computer is of course an effective and useful tool for the safe running of a ship, but its output can only be as accurate as the information entered into it by humans. For example, the official investigation stressed that the chief officer considered it unnecessary to maintain an accurate record of ballast water distribution, to actively pursue and update knowledge of the cargo to be loaded, and to use the loading computer to best effect by entering the VCG of cargo above the deck.

“This last point might have been addressed had the chief officer been instructed in the use of the loading computer as part of his familiarization on joining the ship”, the report reads.

Following the incident, the UK the Maritime and Coastguard Agency issued special guidance on the safe stowage and securing of specialized vehicles, while the owner introduced a procedure whereby the master and chief officer of its vessels are required to confirm receipt and approval of the pre-stowage cargo plan. The company also introduced a vetting inspection campaign of the senior management onboard Hoegh-operated vessels with a focus on matters relating to ship stability and management of cargo operations.

In 2006, the RoRo ‘Cougar Ace’, one of the biggest car carriers at its time, listed and capsized while undergoing a ballast water exchange, causing its entire cargo of almost 5,000 brand new cars to be scrapped. Unlike the Cougar Ace incident, no ballast transfer operations were taking place onboard Hoegh Osaka at the time of the accident. Ballast tank contents were fixed prior to and following the ship leaving the berth. However, previous ballast tank levels had been inconsistently recorded, and so their recorded status at the time of the accident could not be relied on.

EXPLORE MORE IN THE OFFICIAL INVESTIGATION REPORT BY MAIB