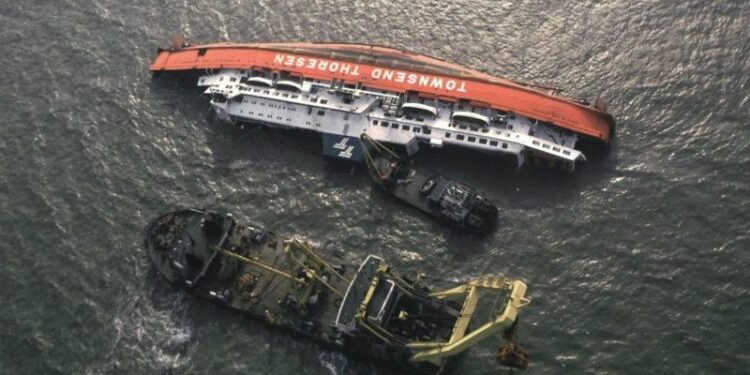 The capsizing of Herald of Free Enterprise, only a few minutes after leaving the Belgian port of Zeebrugge on the night of 6th March 1987, killed 193 people onboard. To date, the incident is considered, not only as the deadliest casualty involving a UK-registered ship since 1919, but also as a wake-up call for several safety improvements in this type of vessels. In addition, this catastrophic capsizing became the cause in 1987 for the IMO Assembly to develop the International Safety Management (ISM) Code and for the creation of UK MAIB.

In the afternoon hours of the 6th March 1987, the UK-registered Ro-Ro ferry ‘Herald of Free Enterprise’ sailed in the inner harbor at Belgium’s Port of Zeebrugge, with 80 crew members, 459 passengers, 81 cars, 47 freight vehicles and three other vehicles onboard.

Leaving for Dover, the ‘Herald’ passed the outer mole at 18.24. She capsized about four minutes later. During the final moments, the ferry turned rapidly to starboard and was prevented from sinking totally because her port side took the ground in shallow water.

The ‘Herald’ came to rest on a heading of 136″ with her starboard side above the surface. Water rapidly filled the ship below the surface level trapping people inside the hull.

As a result, 193 people onboard (others say 188) lost their lives, mostly from hypothermia. Many others were injured.

The immediate factor that led Herald to capsize is that it went to sea with its inner and outer bow doors open, the official investigation report reads. Namely, key factors included:

–>Negligence: The assistant bosun has accepted that it was his duty to close the bow doors at the time of departure from Zeebrugge and that he failed to carry it out. While he had opened the bow doors on arrival in Zeebrugge, he went to his cabin after completing his tasks, where he fell asleep and was not awakened by the call announcement on the loudspeakers that the ship was ready to sail. He remained asleep on his bunk until he was thrown out of it when the HERALD began to capsize. Meanwhile, the First Chief Officer and the Captain also failed to check the doors were closed upon departure.

–>Poor communication and lack of directions: The official accident report highlighted that poor relationship between ship operators and shore-based managers contributed to the tragedy. In court hearings, an ambiguity became evident regarding the definition of each one’s duties and responsibilities.

It was the failure to give clear orders about the duties of the Officers on the Zeebrugge run which contributed so greatly to the causes of this disaster,

A company official admitted that, long before the 6th March 1987, both the company’s sea and shore staff should have given proper consideration to the adequacy of the whole system relating to the closing of doors on this class of ship with their clam doors.

If they had, they should, and would, have improved the system notably by first improving their instructions, at the very least by introducing in the Bridge and Navigation Procedures Guide an express instruction that the doors should be closed, secondly by introducing a positive reporting system, thirdly by ensuring that the closure of the doors was properly checked and, fourthly, by introducing a monitoring or checking system.

–>Pressure to leave the berth: A significant question on the aftermath of the incident was, why could not the loading officer remain on G deck until the doors were closed before going to his harbour station on the bridge? That operation could be completed in less than three minutes. However, it was revealed that the officers always felt under pressure to leave the berth immediately after the completion of loading.

–>Ship design: No. 12 berth at Zeebrugge was a single level berth, not capable of loading both E and G decks simultaneously, as at the berths in Dover and Calais for which the ship was designed. The ramp at Zeebrugge was designed for loading on to the bulkhead deck of single deck ferries. In order to load the upper deck of the HERALD, trim ballast tanks Nos. 14 and 3 were filled.

–>Squat Effect: Reports attribute the incident to a hydrodynamic phenomenon known as the Squat Effect. Under this phenomenon, a ship moving quickly in shallow water creates an area of lowered pressure, shifting the ship closer to the seabed than would otherwise be expected. This means that the water that should normally flow under the hull encounters resistance due to the close proximity of the hull to the seabed and the ship is pulled down.

The case collapsed but it set a precedent for corporate manslaughter being legally admissible in an English court.

The Captain and Chief Officer were suspended from duty.

A general culture of poor communication in the owner company was highlighted soon after the accident. In this respect, the Court stressed the need for:

Additionally, shortly after the accident, the UK called IMO to amend SOLAS, 1974. Starting from April 1988, the MSC adopted SOLAS amendments, including among others:

Notwithstanding the fact that several measures were taken following the accident, it cannot be ignored that a lot of fatalities would have been avoided if safety culture had been built into routine operational procedures.