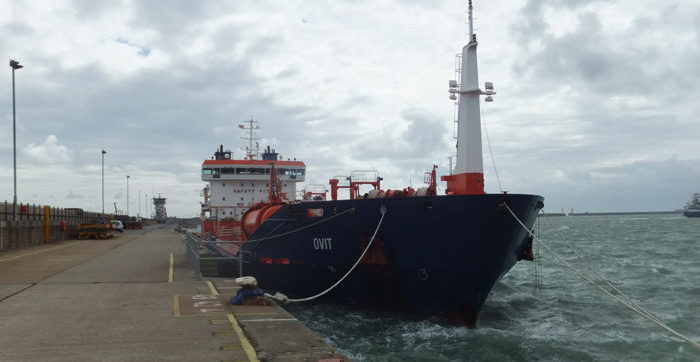 Complying with the ISM Code is at least a prerequisite for a safe navigation. As part of its series on ISM Code-related accidents, SAFETY4SEA focuses  on the grounding of the Maltese-registered tanker ‘Ovit’ in the Dover Strait, off UK, in September 2013, that serves as a great example of how minimum ISM breaches can lead to undesired events.

In the early morning hours of 18 September 2013, the Maltese-registered tanker ‘Ovit’ was transiting the Dover Strait, while on passage from Rotterdam, Netherlands, to Brindisi, Italy, carrying vegetable oil. The intended route through the Dover Strait was prepared using the ship’s ECDIS.

At 0230, the chief officer arrived on the bridge and took over from the second officer as the officer of the watch (OOW). The deck cadet, who was the assigned lookout, joined him.

Ovit was following an autopilot controlled heading of 206° at a speed of between 12 and 13 knots. The OOW selected the scale on the ECDIS display that closely aligned with the 12 nm range scale set on the adjacent radar display. He then sat in the port bridge chair where he had a direct view of both displays.

At about 0300, the heading on the autopilot was adjusted to 225°. As Ovit approached the Varne Bank, the deck cadet, who was standing on the starboard side of the bridge and using binoculars, became aware of flashing white lights ahead. He did not identify the lights or report the sighting to the OOW.

At 0417, Ovit passed close by the Varne Light Float. From 0432 the ship’s speed slowly reduced until the vessel stopped when it grounded on the Varne Bank at 0434.

The ship remained aground for just under 3 hours. There were no injuries and damage to the vessel was superficial. There was no pollution.

Ovit refloated on the rising tide and subsequently berthed in Dover.

The UK MAIB investigation underlined that:

Key ISM-related factors that contributed to the accident included:

This incident is a clear example of ECDIS incompetence by deck officers. The official investigation established that the ECDIS training undertaken by the ship’s master and deck officers had not equipped the crew with the level of knowledge necessary to operate the system effectively.

To address this, the owner company took action to ensure that ECDIS training is effectively implemented onboard and moved to computer-based training for the familiarisation of deck officers in type-specific ECDIS.

Meanwhile, it was highlighted that the master and deck officers did not implement the ship manager’s policies for safe navigation and bridge watchkeeping. The route was not properly checked, inappropriate depth and cross track error settings were used, and the scale of ENC in use was unsuitable for the area. Leadership issues were also raised.

‘The onboard management of Ovit was dysfunctional and the master provided insufficient leadership for a safety culture to be developed and instilled on his bridge,’

On the aftermath, the owner directed all vessels to conduct a master-led risk assessment for navigation in the Dover Strait.

Additionally, the investigation focused on the fact that the serious shortcomings with the navigation onboard Ovit had not been identified during the vessel’s recent audits and inspections. This was addressed with the establishment of a third-party company for provision of navigational audits of ships.[/two_third_last]