by The Editorial Team
in Accidents, Maritime Knowledge, Security 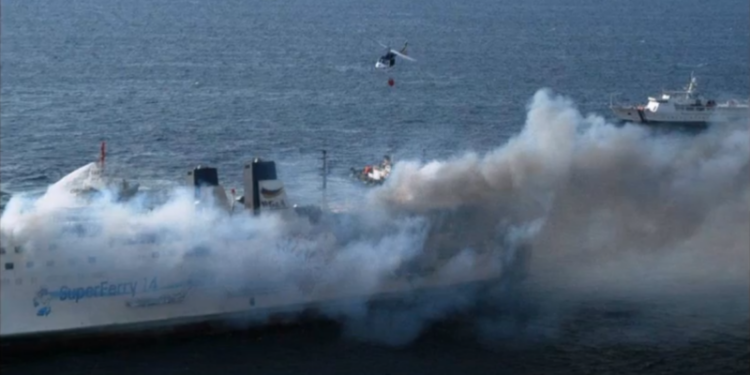 An hour after departure, just off either El Fraile or Corregidor Island, an explosion onboard started a fire that engulfed the ship. Captain Ceferino Manzo issued the order for abandonment at about 1:30 a.m.

As the fire spread across the vessel, most of the survivors jumped into the sea or boarded rescue boats. The vessel eventually sank.

A total of 116 people, including 114 passengers and two crew members, lost their lives in the blast.

The recovery of bodies lasted for months, with only four bodies recovered by Coast Guard divers from the half-submerged ferry in the first week, despite it having been towed to shallower waters near Mariveles town, west of Manila. About another 12 bodies were recovered in the following days.

Eventually, 63 bodies were recovered while another 53 remained unaccounted for, presumed dead.

According to officials, the missing were probably trapped inside the blazing ferry and drowned.

The blast was initially considered as an accident, caused by a gas explosion, although several terrorist groups rushed to claim responsibility shortly after. Among these terrorist groups was the Jihadist militant group Abu Sayyaf, but the President of Philippines at that time, Gloria Macapagal-Arroyo, said that the group’s claims of bombing the Superferry 14 did ‘not hold water’.

However, testimonies by survivors -including Capt. Manzo – after the tragedy, as well as inspection by the divers later, all showed evidence of a bomb blast. As such, five months after the sinking, the scenario of a terrorist attack came officially on the surface: The President announced on 11 October 2004, that the explosion had been caused by a bomb.

According to officials, a man named Redondo Cain Dellosa confessed to planting a bomb onboard for the al- Qaeda linked Abu Sayyaf group. He held a ticket on the ferry for bunk 51B, where the bomb was placed, and disembarked before the ship’s departure. The explosives were stored inside an emptied-out TV set.

Redondo Cain Dellosa was a member of the Rajah Sulaiman Movement, an organization in the Philippines, founded by Ahmed Santos in 1991. Its membership consisted of Filipino Christians who had converted to Islam.

Along with Dellosa’s confession, six more suspects were arrested in connection with the bombing, but the masterminds, Khadaffy Janjalani and Abu Sulaiman, were still at large.

It was believed that Abu Sayyaf bombed Superferry 14 because the company that owned it, WG&A, did not comply with a letter demanding $1 million in protection money in 2003.  Khadaffy Janjalani and Abu Sulaiman died from gun shots, in 2006 and 2007 respectively.

Actions taken since then

The incident occurred only a few months before the entry into force of the International Ship and Port Security code (ISPS). The ISPS came into force on 1st July 2004, under SOLAS chapter XI-2, as a response to the September 11th attacks, and forming the basis of a comprehensive mandatory security regime for international shipping.

According to James Wilkes, Managing Director, Gray Page, as quoted in 2017 SAFETY4SEA Conference,, there have been 5 terrorist attacks against merchant ships since 2001:

Even though the actual number of attacks was small, maritime terrorism threat is real in Southeast Asia, as well as in other parts of the world. In his “Critical Review of 12 years of ISPS Code implementation”” during the 2016 SAFETY4SEA Conference, Mr. Apostolos Belokas, managing Editor, SAFETY4SEA, highlighted a wide number of deficiencies in way of design, implementation and monitoring of the Code, concluding that the Code has failed to address any real-life threat such as piracy & armed robbery, stowaways, smuggling of weapons/drugs, cargo theft and money laundering.

Despite this, states seem to shed efforts towards more secure oceans. For example, the establishment of the Association of Southeast Asian Nations (ASEAN) in 2008, has also led to a comprehensive approach to improve regional security. ASEAN is formed as a regional intergovernmental organization comprising ten countries in Southeast Asia, aimed to promote intergovernmental cooperation and economic, political, security, military, educational, and sociocultural integration among its members and other countries in Asia.

What remains to be seen is how the industry’s approach on maritime security can be extended to eradicate all forms of maritime crime, including piracy and armed robbery which form the ever-lasting threat to the world’s seafarers.