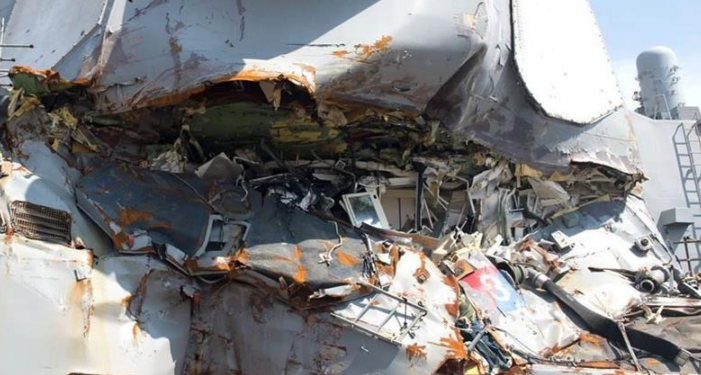 The USS Fitzgerald after collision with the merchant ship

It has been over two years since the US Navy was shaken by two successive collisions involving US navy ships and claiming lives of 17 sailors. Lack of compliance with procedures was considered the root cause of both accidents. As part of its lessons learned series, SAFETY4SEA focuses today on the collision between the USS Fitzgerald with a merchant ship which shocked the US Navy in June 2017 and pushed it to redefine its approach on safety.

On the morning of 16 June 2017, the US warship Fitzgerald departed the homeport of Yokosuka, Japan for routine operations. Weather was pleasant with unlimited visibility.

At approximately 2300 local Japan time, both the Commanding Officer and Executive Officer departed the bridge.

As the Fitzgerald proceeded past Oshima Island, the shipping traffic increased. By 0100 on 17 June, Fitzgerald approached three merchant vessels from its starboard, or right side, forward. These vessels were eastbound through the Mikomoto Shima Vessel Traffic Separation Scheme.

The closest point of approach of these vessels and the Fitzgerald was minimal with each presenting a risk of collision.

In accordance with the International Rules of the Nautical Road, the Fitzgerald was in what is known as a crossing situation with each of the vessels.

At that time, the Officer of the Deck, the person responsible for safe navigation of the ship, and the Junior Officer of the Deck, an officer placed to assist, discussed the relative positioning of the vessels, including Crystal and whether or not action needed taken to avoid them.

Initially, the Officer of the Deck intended to take no action, mistaking Crystal to be another of the two vessels with a greater closest point of approach.

Eventually, the Officer of the Deck realized that Fitzgerald was on a collision course with Crystal, but this recognition was too late. Crystal also took no action to avoid the collision until it was too late.

The two ships collided in the waters of Sagami Wan, in vicinity of the approaches to Tokyo Wan.

The container ship’s bulbous bow penetrated the destroyer’s hull below the waterline, flooding a machinery space, the radio room, and two crew berthing spaces, while the captain’s cabin was crushed.

In the 30 minutes leading up to the collision, neither Fitzgerald nor Crystal took such action to reduce the risk of collision until approximately one minute prior to the collision. Fitzgerald maintained a constant course of 190 degrees at 20 knots of speed.

The flooding of Berthing 2 resulted in the deaths of seven Fitzgerald Sailors, who were unable to egress the space.

The racks of these seven Sailors were located in Rows 3 and 4, the area closest to the starboard access trunk and egress point and directly in the path of the onrushing water.

Three crew, including the commanding officer suffered injuries and were transferred to hospital. They were released a few days after.

-Insufficient training: The US Navy report highlights that Fitzgerald officers possessed an unsatisfactory level of knowledge of the International Rules of the Nautical Road, while watch team members were not familiar with basic radar fundamentals.

Additional teams in the Combat Information Center (CIC), an area on where tactical information is fused to provide maximum situational awareness, also failed to provide the Officer of the Deck input and information.

-Poor seamanship: The Officer of the Deck, the person responsible for safe navigation of the ship, failed to sound the danger signal and to attempt to contact Crystal on Bridge to Bridge radio.

In addition, the Officer of the Deck did not call the Commanding Officer as appropriate and prescribed by Navy procedures to allow him to exercise more senior judgment of the situation.

The remainder of the watch team on the bridge failed to provide situational awareness and input to the Officer of the Deck regarding the situation.

-Poor leadership: The command leadership did not foster a culture of critical self-assessment. Following a near-collision in mid-May, leadership made no effort to determine the root causes and take corrective actions in order to improve the ship’s performance.

Additionally, the command leadership was not aware that the ship’s daily standards of performance had degraded to an unacceptable level.

-Fatigue: “The command leadership failed to assess the risks of fatigue and implement mitigation measures to ensure adequate crew rest,” the US Navy report reads.

The US Navy originally issued negligent homicide charges against the Fitzgerald commanding officer and two more officers who were on duty at the time of the collision.

Eventually, the Navy dropped criminal negligence charges against Fitzgerald commanding officer and the tactical action officer, who instead received secretarial letters of censure from Navy Secretary Richard Spencer. The second officer, a surface warfare coordinator, was sent to the administrative Board of Inquiry.

A Lieutenant junior grade, who was the officer of the deck at the time of the collision, pleaded guilty on a single criminal charge. She was sentenced to three months reduced pay and was issued a punitive reprimand.

The owners of the merchant vessel have agreed to pay $27 million in compensation to the US Navy.

The lessons from this tragedy made headlines especially in the wake of another similar casualty involving a US warship which followed two months later.

Many of the decisions made that led to this incident resulted from poor judgment and decision making of the Commanding Officer, however the Navy stressed that “no single person bears full responsibility for this incident”: The tragedy was a mix of poor leadership, lack of crew preparedness, ineffective control, as well as deficiencies in training and preparations for navigation.

Following the two fatal collisions, US authorities introduced several investigations and reports, including the Comprehensive Review (CR) and the Strategic Readiness Review (SRR), providing a total of 117 recommendations about what the Navy needed to do to improve safety.

One year later, the Navy said it had implemented 91 of them, introducing measures for safe operations, increasing fleet effectiveness, and driving toward a stronger culture of operational excellence.

The key takeaway was that this incident, as well as the US John S McCain incident, was avoidable and resulted from lack of compliance with procedures.

Both of these accidents were preventable, and the respective investigations found multiple failures by watch standers that contributed to the incidents. We must do better…We must never allow an accident like this to take the lives of such magnificent young Sailors and inflict such painful grief on their families and the nation,