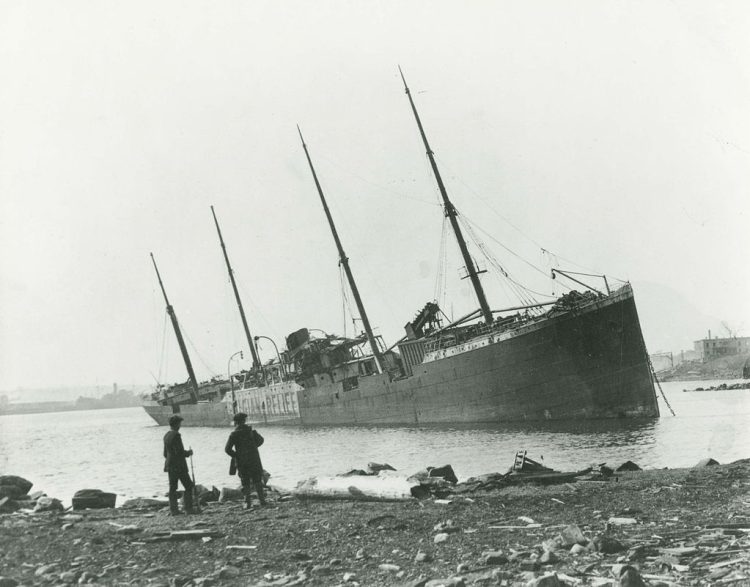 It has been over a century after a ship collision shook the entire city of Halifax, killing almost 2,000 people and injuring more than 9,000. The blast was the largest human-made explosion at the time, releasing the equivalent energy of roughly 2.9 kilotons of TNT (12 TJ) and not surpassed until an atomic bomb was dropped on Hiroshima 3 decades later.

The Norwegian ship “SS Imo” arrived in Halifax, Nova Scotia, Canada, for inspection on 3 December, while en route from the Netherlands to New York. The ship was free to leave on 5 December, but its coal loading delayed and could not depart until the next morning.

The French cargo ship SS Mont-Blanc arrived from New York late on 5 December, fully loaded with the explosives bound for the battlefields of the First World War. The ship was too late to enter the harbour before the nets were raised. Ships carrying dangerous cargo were not allowed into the harbour before the war, but the risks posed by German submarines had resulted in looser regulations.

In the morning of 6 December, both ships started departure. As Mont-Blanc was heading towards Bedford Basin, the Captain observed Imo when it was about 1.21 km away and became concerned as its path appeared to be heading towards his ship’s starboard side. The Mont-Blanc captain gave a short blast signal whistle to indicate that he had the right of way but was met with two short blasts from Imo, indicating that the approaching vessel would not yield its position.

The captain ordered Mont-Blanc to halt engines and angle slightly to starboard. He let out another single blast of his whistle, hoping the other vessel would likewise move to starboard but was again met with a double-blast. The collision was imminent.

The Mont-Blanc was steered hard to port and crossed the bow of Imo in a last-second bid to avoid a collision. The two ships were almost parallel to each other, when Imo suddenly sent out three signal blasts, indicating the ship was reversing its engines. Imo’s prow pushed into the No. 1 hold of Mont Blanc, on starboard side.

The collision made several barrels of benzol onboard the French ship to tip over on the deck, spilling their contents, which ignited and led to a major fire. The captain ordered the crew to abandon the ship. As the lifeboats made their way across the harbour to the Dartmouth shore, the abandoned ship continued to drift and beached itself into a pier.

Just after 9:04 am, the Mont-Blanc exploded. The blast and the resulting tsunami, which surged approximately 18 metres above the high-water mark, pressed some three blocks into the city. More than 1,600 buildings were destroyed, and the force of the wave heaved the Imo toward the shore where it became grounded.

Over 1,600 people were killed instantly, including hundreds of children, and 9,000 were injured, more than 300 of whom later died, but the exact death toll remains unknown. Around 5,900 eye injuries were reported from the flying glass, and several people lost their sight permanently. According to CBC, An estimated one in 50 survivors had significant eye damage, marking the largest mass blinding in Canadian history. 1,630 homes were destroyed, leaving about 6,000 people homeless and 25,000 in insufficient shelter, while a winter blizzard hit the city the next day. Total property damage amounted to an estimated $35 million.

At first, there were rumors that German saboteurs were behind the explosion, which insisted for long after the tragedy. However, the official inquiry after the tragedy found that the Mont-Blanc was to blame, although Imo was generally blamed for being at the wrong side of the channel. As a result, the ship’s Captain, Pilot, and the Royal Canadian Navy’s chief examining officer in charge of the harbour were charged with manslaughter and criminal negligence, but these were soon dropped. The final appeals found the two ships equally responsible, but eventually no one was ever convicted for causing the tragedy. Except for the failed efforts of both ships’ captains to avoid the collision, the exact causes of this collision are not clarified.

The magnitude of the disaster paved the way for standardization in several areas. The incident influenced globally the adoption of stricter maritime safety laws, including cargo identification, storage of hazardous materials and harbour traffic control, according to Britannica.

Furthermore, the accident stresses the need for national emergency services and public health plans in Canada, leading to the creation of a Federal Department of Health in 1919 to look and plan from a national perspective, said Ismael Aquino, Lecturer and former Provincial Director of the Canadian Red Cross, 100 years after the disaster.

Most importantly, the many eye injuries resulting from the disaster led to better understanding of how to care for damaged eyes, partly leading to the founding of the Canadian National Institute for the Blind. Finally, the incident was a landmark for the development of Canadian Red Cross, turning it from wartime relief into peacetime disaster response.