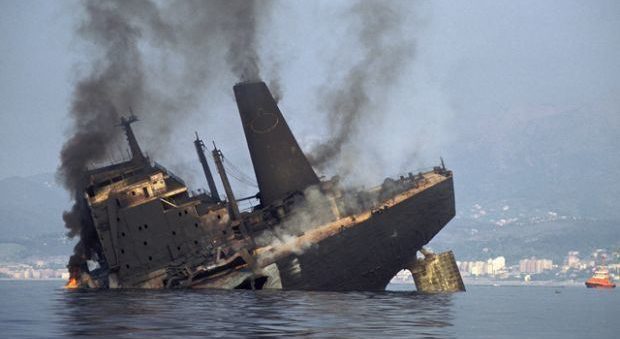 More than 30 years have passed since the explosion and sinking of the VLCC ‘MT Haven’ off the coast of Genoa, Italy. To date, Haven is not only known as the world’s largest shipwrecks, but also the largest oil spill in the history of the Mediterranean Sea.

On 11 April 1991, the Cyprus-flagged Very Large Crude Carrier (VLCC) ‘MT Haven’, formerly ‘Amoco Milford Haven’, had returned from the Persian Gulf and was unloading an Iranian cargo of 230,000 tons of crude oil to a floating platform, about 11 km off Genoa.

Having transferred 80,000 tons, the ship disconnected from the platform for a routine internal transfer operation, to allow oil to be pumped from two side-holds into a central one. The process was a routine.

Unexpectedly, something went wrong. A vast explosion occurred in tank number 2 in the bow area, tearing away the sides of the ship.

Italian authorities acted quickly and fire-fighting operations were initiated rapidly after the initial explosions, but Haven was seven miles off the coast making it difficult to fight.

As men fought to bring the fire under control, barriers were deployed around the Haven to contain the oil pollution.

The vessel broke into three sections. The vessel drifted south-west where the bow section then sank.

The main section of the vessel sank approximately 1 ½ nautical mile off the coast, between Arenzano and Varazze, on 14th April following further explosions.

The remaining main section was towed towards Capo Arenzano, west of Genoa.

Six crew members were killed instantly as a result from the explosion.

The explosion and fire onboard the ship resulted in the loss of its remaining cargo of 144,000 tonnes of crude oil into the sea, the biggest quantity of oil released in the Mediterranean, according to REMPEC.

More than 10,000 tonnes were spilled prior to the sinking of the main section with further releases of oil for more than a year.

Approximately 50 million gallons of crude oil spilled into the Mediterranean in total.

The oil spilled initially spread widely along the north shores of the Ligurian Sea, resulting in heavy contamination of the Italian coastline, and to a lesser extent of the French and Monaco shores.

Response efforts resulted in the collection of approximately 5,500m3 of oil. Shoreline clean-up was undertaken primarily by volunteers and military personnel and involved mostly manual removal of oil and oiled debris, according to ITOPF.

The impact on fauna was significant. A 43% reduction in fish populations was estimated in certain fishing areas, while about 100 birds were recovered oiled.

For the next 12 years, the shoreline in Italy and France was still polluted. Clean up operations ended in 2008.

This is considered as the largest oil spill in the Mediterranean.

It was reported that the ship was struck by an Exocet missile during the Iran-Iraq war, back in 1987.

Although it underwent repairs afterwards in Singapore and considered fit for duty, the owners were blamed for hastily putting the ship back into operation and failing to perform routine maintenance.

Prosecutors asked for seven-year sentences for manslaughter and extortion against the two owners, who pleaded not guilty and were acquitted after three retrials. They were cleared and the sinking was blamed mostly on human error.

“My main comment is to ask why it took so long to clear innocent people of these terrible charges,” one of the owners was quoted as saying after the decision.

The accident highlighted issues related to poor ship maintenance, as well as risks associated with the transport of oil and dangerous substances in Italian waters, especially when linked to Moby Prince ferry disaster that occurred the previous day.

The incident also vastly demonstrated the importance of compensation of ecological damages in the IOPC system, as well as existence of a national legislation on the possibility of providing compensation for damage to the environment, according to CEDRE.

As such, the legislation acted as a basis for the Italian Government’s claim and for the allocation of part of the amicable settlement to environmental restoration.

The position adopted by the judge on the interpretation of the CLC and IOPC conventions played an important part in the amicable negotiations with IOPC and the ship’s insurer. This case is also of interest in terms of the allocation of funds to a national scientific institute to design the plan of action and to the regional authorities to carry out the program,