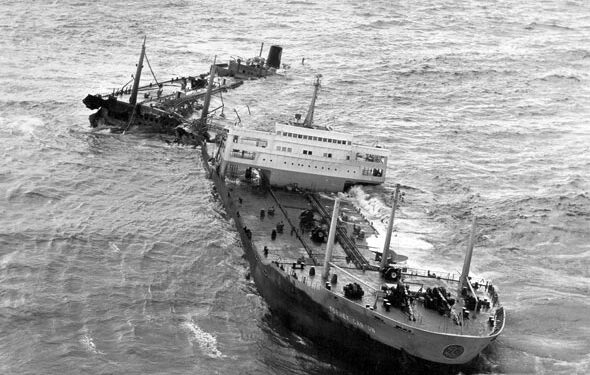 More than 50 years after the supertanker ‘Torrey Canyon’ ran aground off England, spurring every drop of its crude oil cargo into the Atlantic, SAFETY4SEA attempts to analyze the world’s first major oil tanker disaster that put the meaning of environmental conservation in a new context.

Even 50 years after the ship hit the rocks, it makes no wonder that this incident still has a place in the heavy legacy of maritime disasters.

Torrey Canyon marked a number of firsts: It was a first-generation cape size supertanker of 297 metres l.o.a., the largest vessel ever to be wrecked, the biggest oil spill in history until that time, UK’s worst environmental accident ever and first major tanker disaster to attract such an enormous media coverage, drawing universal attention to the dangers of dispersants.

On 18 March 1967, the Liberian-flagged supertanker ‘Torrey Canyon’ was en route from Kuwait to a refinery at Milford Haven, UK, loaded with 119,328 tons of crude oil shipped by BP Trading Limited.

While underway at about 8:50am, the ship ran aground on the Seven Stones reef, between the Isles of Scilly and Land’s End in Cornwall.

I just could not believe it. They’d hit the Seven Stones [reef] in broad daylight,

…an eyewitness, resident of St Martin’s, was quoted as saying to Guardian.

There were no fatalities, but the accident damaged the ship’s tanks and resulted to a spill of its vast cargo of crude oil into the sea.

No oil spill of that size had ever occurred until that time.

Except from the 30,000 tons of crude oil that immediately spilled into the sea from the stricken vessel’s ruptured tanks, during the next 12 days, the entire cargo of approximately 119,000 tons of Kuwait crude oil was lost.

The next day, the slick was 20 miles (about 32 km) long. By March 25, oil began to arrive on the Cornish beaches, affecting 100 miles of coastline.

A wide variety of methods to mitigate the spill were tried. Burning the slick proved unsuccessful, and eventually the British Government gave orders for Torrey Canyon to be destroyed by aerial bombardment, so that all the oil remaining onboard would be burnt off.

Between March 28 and 30, British Naval and Air Forces bombed the ship in order to open the remaining tanks and release the rest of the oil into the sea.

The oil was then set on fire by dropping aviation fuel, napalm and sodium chlorate devices; and it is believed that all the oil in the vicinity of the wreck was destroyed by March 30.

This operation was partially successful but did not prevent escaping oil from polluting many parts of the south west of England, causing the deaths of thousands of seabirds and threatening the livelihoods of many local people in the forthcoming summer tourist season.

The drifting oil polluted even beaches and harbors in the Channel Islands and Brittany.

The clean-up efforts took months and reportedly cost the British and French Governments over USD16 million.

In the opinion of the Board of Investigation set up by the Liberian Government, the stranding was due solely to the negligence of the master,

…a preliminary report reads at the time.

The Master had left the ship on autopilot overnight, but strong currents overnight pushed the ship to the north and east and the chief officer altered her course towards the north. When the Captain awoke, he saw that the Scilly Isles were unexpectedly off his port, not starboard bow.

The master ordered a change of course but that took the ship towards the Seven Stones reef.

He planned, and tried, to adjust his course by ordering a hard swing to port but, at the critical time, the ship did not respond. No doubt that was because he had left the ship on autopilot. Only too late did he disengage the autopilot,

Titanic, the world’s most famous shipwreck that killed over 1,500 people, was what pushed maritime nations to adopt SOLAS, the landmark Convention on shipping safety, in 1914. Torrey Canyon is considered the accident that led IMO to adopt MARPOL, the landmark convention on pollution prevention from ships and the second pillar of shipping’s regulatory framework.

A major area of focus in this case was the oil spill response. For example, the excessive and indiscriminate use of early dispersants and solvent based cleaning agents were one of the factors leading to considerable environmental damage.

At the time, the dispersants were considerably more toxic than those used today and were applied in far greater concentrations, often being poured undiluted on slicks and beaches.

Many of the detrimental impacts of the spill were later related to the high volume, high concentration and high toxicity of the dispersant and detergents used,

As such, the spill triggered international Conventions, which form the basis for compensation for damage caused by tanker spills.

In light of the inefficient handling which failed to prevent the spill magnitude, the first tangible positive outcome from the disaster was the adoption of the International Convention relating to Intervention on the High Seas in cases of Oil Pollution Casualties, 1969, affirming the right of a coastal State to take measures on the high seas necessary to prevent pollution in their coastline.

More importantly, the disaster was a major factor in development of the International Convention for the Prevention of Pollution from Ships (MARPOL), 1973. Until that time, pollution control was still a minor concern for shipping.

It was essentially this incident that set in motion the chain of events that eventually led to the adoption of MARPOL – as well as a host of Conventions in the field of liability and compensation,