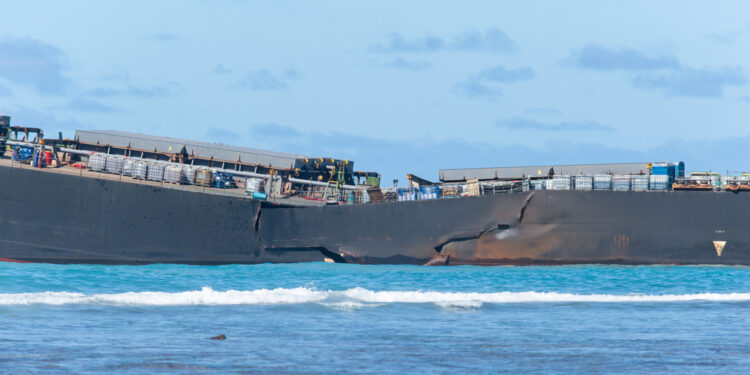 Wakashio wrecked off the coast of Mauritius / Credit: Shutterstock

These are the key findings of a report issued in December by The Insititute of Security Studies (ISS), as part of its Africa Report series which analyses human security problems and solutions at the regional and continental level.

Despite decades of policy work, countries party to the Nairobi Convention still have different capabilities in responding to marine pollution incidents, including equipment and personnel, the report finds.

In 1994, the bulk carrier MV Apollo Sea sank off Cape Town, silling bunker fuel and contaminated beaches
and penguins. In 2000 the MV Treasure sank and spilled 200 tonnes of HFO, with devastating impacts on African penguins. In 2009 the Turkish bulk carrier Gulser Ana ran aground off Cap St Marie, southern Madagascar, resulting in an oil spill of 500 MT of HFO and 39 000 MT of rock phosphate cargo.

In the most resent case, the bulk carrier MV Wakashio ran aground off Mauritius early in the evening of 25 July 2020, attracting significant media attention for several weeks following the occurrence, as fuel oil started leaking from the vessel in the environmentally sensitive region and adverse weather conditions impeded proper response.

One of the lessons to be learned from the recent incident in Mauritius is that NOSCPs must be revised regularly and must provide for all eventualities.

While Mauritius was prepared and took swift preventative actions during the MV Wakashio incident, the country was ‘insufficiently equipped’ to handle the unprecedented environmental catastrophe that followed. The ‘resources and capacity’ of the NOSCP were overwhelmed and the country received assistance from France, India, Japan and the IMO.

The MV Wakashio incident raised questions as to whether countries’ contingency plans are sufficient, and what makes a country or region sufficiently equipped to respond to marine pollution incidents.