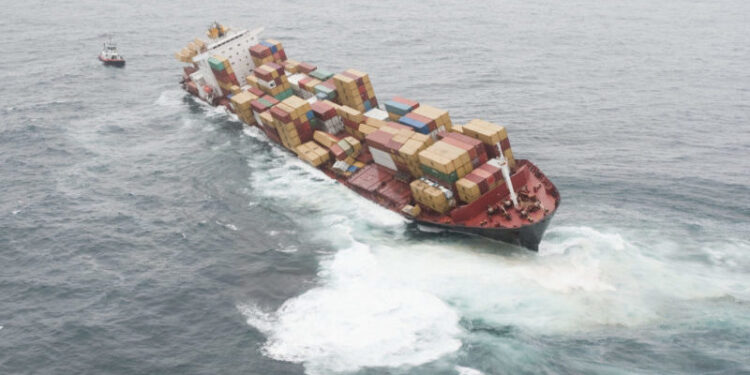 The grounding of the Liberian-flagged container ship ‘Rena’ on the Astrolabe Reef resulted in a discharge of 200 tonnes of heavy fuel oil into the water, while it is acclaimed as the second most expensive salvage operation in maritime history.

Rena left the New Zealand port of Napier at 1020 on 4 October 2011, bound for the port of Tauranga. The master had given an estimated time of arrival at 0300 the next day. After departure, the master noticed currents on the chart and authorised the watchkeepers to deviate from the planned course to shorten the distance, and to search for the least unfavourable currents.

The Rena’s second mate took over the watch shortly after midnight on 4 October. Tauranga Harbour Control informed the second mate that the latest time the Rena could take the harbour pilot on board was 0300.

The planned course to the Tauranga pilot station was to pass two nm north of Astrolabe Reef before making the final adjustment in course to the pilot station. The second mate decided to reduce the two miles to one mile to save time.

The second mate then made a series of small course adjustments towards Astrolabe Reef to make the shortcut. In doing so, he altered the course 5 degrees past the required track and did not make an allowance for any compass error or sideways “drift”, and as a consequence the Rena was making a ground track directly for Astrolabe Reef. Meanwhile, the master had been woken and arrived on the bridge to prepare for arrival at the port.

The master and second mate discussed preparations for arrival at the pilot station. The master then assumed control of the ship, having received virtually no information on where the ship was, where it was heading, and what immediate dangers to navigation he needed to consider.

At the period of handover, nobody was monitoring the position of the ship. At 0214 the Rena ran aground at full speed on Astrolabe Reef. The ship remained stuck fast on the reef and in the ensuing months it broke in two. The aft section moved off the reef and sank. About 200 tonnes of HFO were lost to the sea. A substantial amount of cargo in the containers was lost. The vessel became a total loss on 11 October 2011.

The several investigations on the aftermath of the disaster, including the official report by New Zealand’s Transport Accident Investigation Committee (TAIC), highlighted that Rena grounding was a multi-factored accident resulting mostly from lack of procedural compliance.

In its official investigation into the accident, TAIC refers that the Rena grounding was not in any way attributable to the malfunction of any onboard machinery or navigational equipment.

However, it was discovered that Rena’s passage plan from Napier to Tauranga on the accident voyage did not meet the standards documented in the CIEL safety management system or the IMO Voyage Planning Guidelines.

The key cause of the accident was that the bridge crew progressively adjusted the automatic pilot to an incorrect heading and without making allowance for any leeway, set or gyrocompass error. The resultant ground track took the ship directly over the reef.

Meanwhile, the second mate’s deviation to save time increased the risk and directly contributed to the grounding, TAIC underlined, adding that he ‘was not making the most effective use of the bridge navigation equipment’ before the grounding.

Investigation revealed that this was not the crew’s first lack of compliance with procedures, as a review of previous voyage plans revealed a number of acts and omissions similar to those made on the accident voyage.

Equally notable was the fact that the master assumed control of the Rena when the ship was tracking directly for Astrolabe Reef and he ‘had received virtually no information on where the ship was, where it was heading, and what immediate dangers to navigation he needed to consider.’

Another significant aspect highlighted was fatigue, as it was found that Rena had called at five New Zealand ports in six days.

The grounding of the Rena on Otaiti claimed no lives, but it has been referred to as New Zealand’s worst marine environmental disaster and the second most expensive salvage operation in maritime history.

The ship grounded with 1,700 tonnes of heavy oil and 200 tonnes of diesel fuel onboard on 5 October. By 9 October, a 5 km oil slick was evident and by 10 October, oil began washing ashore at Mount Maunganui beach. Bad weather that night caused the ship to shift further onto the reef resulting resulting in a further 130 – 350 tonnes of oil leaking and crew evacuation.

On 14 October, it was reported that the ship’s hull had cracked in half, and a change in the wind direction meant that oil was likely to spread as far as as Whakatane and Opotiki.

In January 2012, the Rena completely broke in half and the stern section slipped off of the reef and eventually sank. A small amount of oil and containers escaped the ship as it broke in half.

Within the range of where the oil spilled the rare New Zealand spotted dotterel bird and 25 other native birds species inhabit. The beaches affected were closed until cleanup crews arrived, and locals were instructed to keep a distance from the shore and the oil clusters.

The environmental consequences were also reported in numbers:

Both the captain and navigation officer were charged for operating a vessel in a manner likely to cause danger under the Maritime Transport Act 1994, and for discharging a contaminant under the Maritime Transport Act 1994 , as well as on other charges under the Crimes Act for including attempting to pervert the course of justice. They pleaded guilty to 11 charges and were sentenced to jail for seven months, but served half the time.

The Greek owner of the ship was fined $300,000 after pleading guilty under New Zealand’s Resource Management Act.