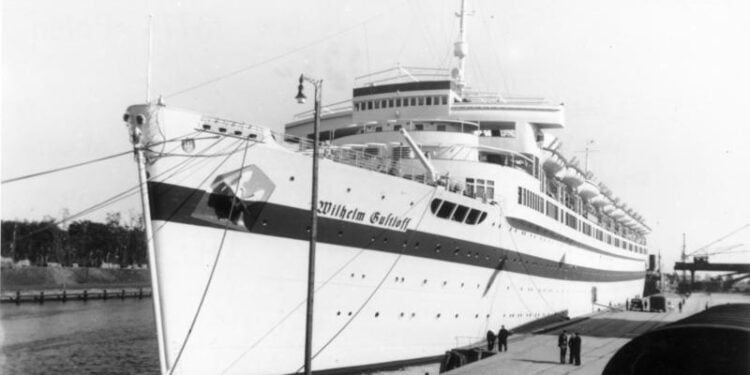 Have you ever wondered which is the deadliest maritime incident ever recorded? When googling for an answer, the well-known tragedy of Dona Paz ferry in the Philippines appears first, but the biggest death toll in a single ship sinking in history occurred when the German military vessel Wilhelm Gustloff went down with 9,000 people in January 1945.

And it is exactly because it was a military ship that history seems to have erased this occurrence from claiming the title of the worst ever maritime accident, even though the ship was transferring mostly civilians on the day of the sinking.

What was Wilhelm Gustloff?

Named after a leader of the Nazi Party’s Swiss branch, the Wilhelm Gustloff was constructed in 1936 under the orders of Adolf Hitler to serve recreational cruising for the German Labour Front (the official trade union of Nazi Party). In other words, the ship would provide recreational vacation opportunities to German masses in significantly low prices. Shortly after its maiden voyage in April 1938, the ship was particularly popular to German people.

From September 1939 to November 1940, Wilhelm Gustloff served as a hospital ship, officially designated Lazarettschiff D. However, the realities of war meant that the Gustloff was soon used as a barracks, so medical equipment was removed, and the ship was painted in naval grey. Wilhelm Gustloff sat in dock at Gdynia, Poland, for over four years, serving as a floating barracks for U-boat trainees.

By January 1945, the outcome of World War II was almost obvious, with the Allies having a significant advantage over the Third Reich. The advancing Red Army urged the Germans to the so-called “Operation Hannibal”, a naval operation involving the evacuation by sea of German troops and civilians from East Prussia, seeking an escape from Soviets. The seaborne rescue effort deployed everything still afloat -from warships to former luxury liners. Given that the Soviets had cut land routes in the south, the best chance of escape for German citizens was the Baltic Sea. As such, the operation was carried out from several ports around the Gulf of Danzig, including Gotenhafen (now Gdynia), where Wilhelm Gustloff was docked.

When boarding started on this vessel, the Wilhelm Gustloff had been tied up at the dock for four years. German officials issued and checked for tickets, but as the word spread about the ship’s departure, many more people rushed to embark. While priority was given to families with children, the cold and panic led many more thousand people to sneak in with tricks or bribery. The final number of the people embarked on 30 January was never known, but it is estimated at over 10,000, when the ship capacity was less than 2,000. The ship departed Gdynia at about 12:30.

Shortly after 9 p.m., three torpedoes hit the ship making it quickly list to port. A blackout left the ship in darkness. The severe listing made it impossible to lower lifeboats on the starboard side. The panic made some armed passengers to turn their guns on themselves, while the tilt sent people and objects crashing toward the bow. In 50-70 minutes after the first torpedo, the ship went down by the bow.

An estimated 9,343 people perished in the disaster, while about 1,200 were rescued. Most victims died from the torpedoes directly, from drowning and from the freezing Baltic waters (estimated temperature that night was between −18 to −10 °C), while others were crushed amid the panic caused in stairs and decks.

While most people onboard were German civilians, the ship was also carrying 162 wounded soldiers, some Gestapo personnel, members of the Organisation Todt, and Nazi officials with their families. For weeks after the disaster, frozen bodies were washing up on the nearby shore.

Why was the death toll so big?

A significant factor to the death toll was that the ship was overcrowded, and due to the temperature and humidity inside, many passengers defied orders not to remove their life jackets. The cold was also catastrophic, as people did not stand the freezing water, while the lifeboats could not be lowered as they were frozen in their davits and had to be broken free.

Contributing to the incident itself could be considered the fact that the Soviet submarine was under command of Alexander Marinesko, who was in a tenuous position over his alcohol consumption habits and saw the Gustloff destruction as an opportunity to enhance his reputation. In addition, significant attention has been focused on the Gustloff’s Captain decision to turn on the ship’s navigation lights—increasing its visibility for lurking enemy submarines, despite relevant warnings.

Why is this tragedy neglected?

While no explanation is ever enough to justify war actions, there are three reasons why the incident has been identified, in history, with nothing more than another wartime loss:

Despite the unprecedented death toll, the sinking of the Wilhelm Gustloff is considered legitimate by historians in the context of war conflict. The ship overloading was certainly an area of concern in what could have been different, but the emergency of evading war brutality was of essence. Although it is hard to trace responsibility and lessons learned, the incident is certainly another catastrophic, less famous event associated with World War II. And towards the end of the world’s deadliest war, neither the defeated or the winners saw incentives to widely broadcast the deaths of so many citizens.