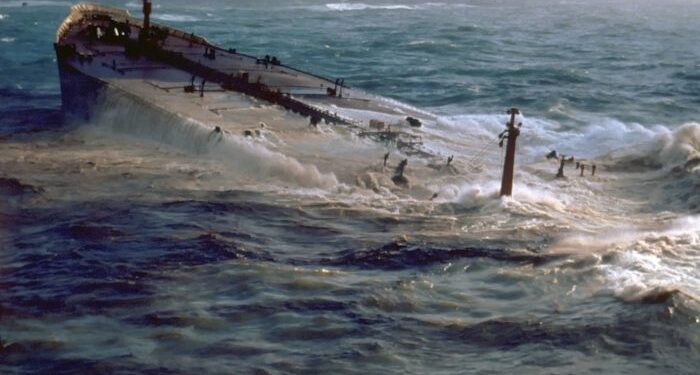 Following the Torrey Canyon oil spill, which claimed the title of the worst environmental tanker disaster when it turned the sea black in March 1967, the sinking of the Amoco Cadiz oil tanker later, in 1978, came to claim again the title of the world’s worst maritime oil spill, putting another dark spot in the environmental record of shipping and accounting for the largest loss of marine life ever recorded after an oil spill.

In terms of the spill size, this incident is ranked as the fourth biggest tanker oil spill in the world after Atlantic Empress (1979), ABT Summer (1991) and Castillo de Bellver (1983). This means the Amoco Cadiz oil spill was the largest the world had ever seen from a tanker until that time. Torrey Canyon was ranked 7th, according to Britannica.

Accident details at a glance

In the morning hours of 16 March 1978, the Liberian-flagged VLCC Amoco Cadiz was en route from the Persian Gulf to Europe with more than 220,000 tonnes of crude oil, when an enormous wave hit the vessel, causing a steering failure and leaving the ship adrift towards the Breton coast in a heavy storm.

Tugboat assistance rushed to the scene, but inclement weather impeded the operations, pushing the ship further adrift near the shoreline.

Despite all the efforts, the Amoco Cadiz ran aground on a rock outcropping, near the small port of Portsall, on the northwest coast of France. By the afternoon of 17 March, the vessel broke just forward of the wheelhouse and the first oil slicks quickly reached the coast.

Inclement weather prevented an effective oil recovery operation and made the ship to split in three and sink in the following days, resulting in the largest oil spill of its kind in history to that date.

There were no injuries or fatalities, as the crew was rescued by the French Naval Aviation.

Within the next two weeks, the entire cargo of over 220,000 tonnes of light Iranian and Arabian crude oil and 4,000 tonnes of bunker fuel was released into heavy seas, polluting more than 300 km of European coast.

Much of the oil quickly formed a viscous water-in-oil emulsion, increasing the volume of pollutant by up to five times, according to ITOPF.

By the end of April, oil had contaminated 320km of the Brittany coastline, and had extended as far east as the Channel Islands.

The US NOAA estimates that the total oil spill amounted to 220,880 metric tonnes of oil. Although the total quantity of collected oil and water reached 100,000 tons, less than 20,000 tons of oil were recovered from this liquid after treatment in refining plants.

All told, less than 3,000 tonnes of dispersants were used. Some chalk was also used as a sinking agent, but with the consequence of transferring part of the problem to the seabed.

At the time, the AMOCO CADIZ incident resulted in the largest loss of marine life ever recorded after an oil spill.

By July, scientists declared the Amoco Cadiz oil spill accounted for the largest biological kill of marine life ever recorded from such an incident.

It is the largest biological kill from any spill we’ve looked at,

Although echinoderm and small crustacean populations almost completely disappeared from some areas, populations of many species had recovered within a year.

Diving birds constituted the majority of the nearly 20,000 dead birds that were recovered. Oyster cultivation in the estuaries (“Abers”) was seriously affected and an estimated 9,000 tonnes were destroyed because of contamination and to safeguard market confidence.

Other shell and fin fisheries as well as seaweed gathering were seriously affected in the short-term, as was tourism.

Cleanup activities on rocky shores, such as pressure-washing, as well as trampling and sediment removal on salt marshes caused biological impacts.

Failure to remove oil from temporary oil collection pits on some soft sediment shorelines before inundation by the incoming tide also resulted in longer-term contamination,

A clear immediate factor contributing to this incident was heavy weather, which caused the steering failure, impeded response operations and resulted in the complete breakup of the ship before any oil could be pumped out of the wreck.

Rough seas, along with the isolated location of the grounding, restricted cleanup efforts for the two weeks following the incident.

On March 25, French Prime Minister Raymond Barre announced the wreck was caused by “grave negligence,” and prohibited tankers from coming within 11 kilometers of the French coast.

The master of the tanker was reportedly put under investigation and eventually charged with breaking French pollution laws.

The French Government, along with the local communities and fishermen affected, prosecuted the owner company in the United States.

The owner argued they had no obligation to pay as their company was not responsible for the failing steering system.

After more than a decade, in 1992, they finally agreed to pay $200 million (EUR 190 million) in damages, less than half of the claimed amount.

The Amoco Cadiz incident remains one of the most comprehensively studied oil spills in history, not only for the magnitude of its impact on the ecosystem, but also for raising questions regarding safety of oil transportation in the world’s oceans.

On the contrary of other ships involved in relevant accidents in the previous years, Amoco Cadiz was a relatively new, well‐equipped supertanker owned and operated by a major American oil company with a good safety record.

This raised questions at that time about the nature of the huge ships themselves, and the lack of effective regulation of tankers sailing under “flags of convenience”, an issue which remains relevant until today.

International media of the time quoted NOAA Administrator Richard Frank as saying that this incident highlighted the need for tighter oil tanker safety and operational standards.

Meanwhile, on the aftermath of the accident, French media diffused apocalyptic images of an immense oil slick which shocked local community. The incident came in addition to Torrey Canyon disaster, which also took place in European waters and also made headlines in international media, to establish lasting changes in the regulation of shipping and in the organization of responses to ecological emergencies such as oil spills.

Notably, the consequences of Amoco Cadiz accident caused the French Government to implement its Polmar Plan, establishing a regulatory and operational framework for action in case of accidental pollution of the sea.