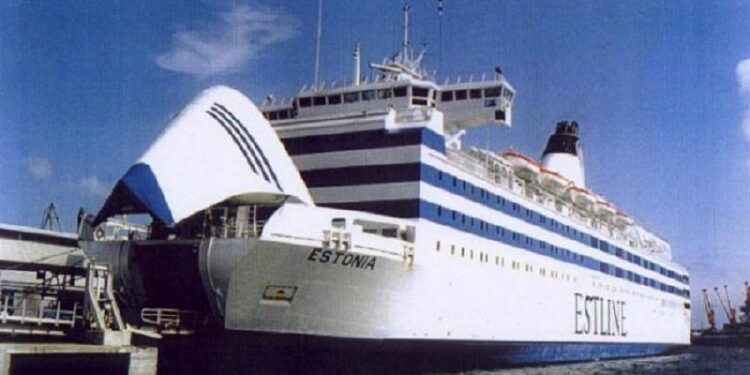 The sinking of the ferry vessel MS Estonia in the Baltic Sea marks the second-deadliest peacetime sinking of a European ship, after the Titanic, as well as the deadliest peacetime shipwreck to have taken place in European waters. At the time of the incident, the ship was carrying 989 people, of whom 852 lost their lives. When the MS Estonia sank it shook the shipping industry, due to its unprecedented extent in the number of victims, and the damage it was caused.

The Estonian-flagged Ro-Ro passenger ferry Estonia had left Tallinn, Estonia, on 27 September 1994, planned to arrive at Stockholm, Sweden, carrying 989 people, 803 of whom were passengers.

The ship left the port with all four main engines running, while when it was clear of the harbour area, a full service speed was set. The engine setting was also maintained up to the accident.

At least 25 dead after ferry sinks in Bangladesh

The voyage was going normally, with sea conditions along the Estonian coast being moderate, before becoming more rough when the ship left the sheltered waters. The ship had a slight starboard list, because of a combination of athwartships weight disposition, cargo disposition and wind pressure on the port side.

During the voyage, the wind velocity increased, with visibility being generally over 10 nautical miles. At midnight there was also a significant wave height of 3-4 m, and the rolling and pitching of the vessel increased gradually.

At about 0025 hrs, MS Estonia’s speed was about 14 knots and the vessel faced the seas on her port bow. Because of increasing rolling, the fin stabilisers were extended.

During his scheduled round on the car deck the seaman of the watch heard shortly a metallic bang from the bow area as the ship hit a heavy wave.

The seaman of the watch informed the second officer B about what he had heard and was ordered to find out what had caused the bang. The seaman did so by waiting at the ramp, listening and checking the indicator lamps for the visor and ramp locking devices. He reported that everything seemed to be normal.

However, further observations of unusual noise were made by many passengers and some crew members who were off duty in their cabins.

When the seaman of the watch returned from his round, he caught up the master and entered the bridge, which was just behind him. Shortly after, he was sent down to the car deck to figure out the cause of the sounds reported by telephone to the bridge. He did not, however, manage to reach the car deck.

At about 0115 hrs the visor separated from the bow and tilted over the stem. The ramp was pulled fully open, allowing large amounts of water to enter the car deck. Very quickly, the ship took on a heavy starboard list, it was turned to port and slowed down.

Immediately, passengers started to rush up the staircases, but many were trapped in their cabins and had no chance of getting out in time. Lifejackets were also distributed to those passengers who managed to reach the boat deck. They jumped or were washed into the sea. In addition, some were able to climb into liferafts which had been released from the vessel. Nevertheless, no lifeboats could be launched, because of the heavy list.

A first Mayday call from the Estonia was received at 0122 hrs. A second Mayday call was transmitted shortly afterwards and by 0124 hrs 14 ship- and shore-based radio stations, including the Maritime Rescue Co-ordination Centre (MRCC) in Turku, had received the Mayday calls.

At that time all four main engines had stopped. The main generators stopped a little later and the emergency generator started automatically, supplying power to crucial equipment and to limited lights in public areas and on deck. The ship was now drifting, lying across the seas.

The list to starboard then increased and water had started to enter the accommodation decks. Flooding of the accommodation continued with considerable speed and the starboard side of the ship was submerged. During the final stage of flooding the list was over 90 degrees. The ship sank fast, stern first, and disappeared from the radar screens of ships in the area.

Rescue efforts were launched by MRCC Turku. Namely, about one hour after the Estonia had sunk, four passenger ferries nearby arrived on the scene of the accident. Moreover, rescue helicopters were deployed and the first one arrived at 0305 hrs.

During the night and early morning, helicopters and assisting ships rescued 138 people, of whom one later died in hospital. During the day and on the two days that followed, a total of 92 bodies were recovered. The majority of the missing persons accompanied the ship to the seabed.

The wreck was found in international waters within Finland’s Search and Rescue Region, resting on the seabed at a water depth of about 80 m. The visor was missing and the ramp partly open.

852 persons lost their lives when Estonia sank. Of them one died in hospital and 92 were found in the water and in liferafts during the rescue operation. No victims were found on the seabed, surrounding the wreck.

Furthermore, two bodies were discovered in the area of the Gulf of Finland, one in the open sea and one on the shorelines of Estonia.

In addition, the report concluded that the crew did not respond sufficiently. In fact:

What changed after the accident

In 1999, special training requirements related to crowd and crisis management, as well as human behaviour were expanded to cover crew on all passenger ships, while amendments have been made regarding watch-keeping standards.

Furthermore, Estonia’s distress beacons or EPIRBs had to be manually activated, something that did not happen. If they were activated, they would have made it immediately obvious that the ship had sunk and the location would have been clear. As a result, All EPIRBs were then required to be automatic, while it is considered that the accident played a key role to legislate Voyage Data Recorders.

What is more, IMO introduced new SOLAS liferaft regulations for rescue from listing ships in rough water. However, the fact is that launching such craft, even in training exercises, is still a dangerous for the crew.

Additionally, new designs, such as the ‘citadel concept’, were also influenced by Estonia. These designs aim make sure that damaged ships have enough buoyancy to remain afloat.

Finally, SOLAS 90, which came into effect in 2010, mandates passenger ships to have specific stability requirements, while passenger vessels in North West Europe must be able to survive 50 centimetres of water on the car deck.