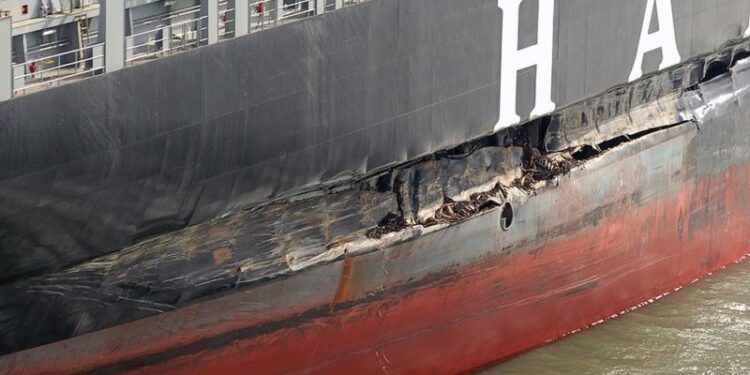 In 2007, the Hong Kong-flagged container ship ‘Cosco Busan’ allided with the San Francisco-Oakland Bay Bridge, causing one of the most discussed oil spills in US waters. The incident is a good example of how lack of communication and poor oversight for an efficient implementation of the SMS can lead to serious environmental incidents.

At about 0800 am on 7 November 2007, the Hong Kong-registered container ship ‘Cosco Busan’ departed its berth at pier 56 in the Port of Oakland heading for Busan, South Korea, with all Chinese crew.

At about 0827, the ship was about 1/3 nautical mile from the San Francisco–Oakland Bay Bridge, when a VTS operator, who was monitoring traffic in the Central Bay Sector, noticed that the vessel deviating from its intended route and was out of position to make an approach to the bridge’s Delta–Echo span. The VTS operator radioed the pilot addressing him by his pilot designator name, “Romeo.” The VTS operator and the pilot referred to VTS as “traffic.”

The VDR showed that when the pilot reported to VTS that he was “steering 280,” the ship’s actual heading was 262°. The VTS operator did not further communicate with the pilot.

About 10 seconds later, the pilot ordered the rudder (which had been at hard starboard) to mid-ships. After another 5 seconds, the pilot ordered hard port rudder. The forward port side of the vessel struck the corner of the fendering system at the base of the Delta tower at 0830.

Contact with the bridge tower created a 212-foot-long by 10-foot-high by 8-foot-deep gash in the forward port side of the ship and breached the Nos. 3 and 4 port fuel tanks and the No. 2 port ballast tank. There were no injuries, but a large oil spill occurred.

As a result of the breached fuel tanks, about 53,500 gallons of fuel oil were released into San Francisco Bay, contaminating about 26 miles of shoreline, killing thousands of birds, temporarily closing fishery on the bay, and delaying the start of the crab-fishing season.

According to an official environmental assessment on the aftermath, the impact was estimated as follows:

The operating company pleaded guilty to charges of water pollution and falsifying documents and agreed to pay $10 million in fines and penalties. They accepted part of the blame for the accident for failing to provide adequate training to the ship’s new captain and crew. The company also admitted presenting false and forged documents to the USCG about the ship’s voyage plan to obstruct the investigation.

On 10 July 2009, the pilot of the Cosco Busan was sentenced to 10 months imprisonment. On 19 September 2011, federal, state, and local agencies announced a final comprehensive civil settlement for $44.4 million, including:

NTSB identified as key cause of the incident the failure to safely navigate the vessel in restricted visibility as a result of:

Contributing to the accident was:

Among the key safety issues identified after the incident were issues related to poor training of the crew, as well as issues related to medical oversight of the ‘Cosco Busan’ pilots and mariners in general. The official report also underlined the fact that a passage plan was not prepared in accordance with the SMS procedure for sailing in restricted visibility.

The pilot also made many basic errors that resulted in the accident, such as leaving in extreme fog, failing to notify the Master of the USCG at the time regarding the unreliable radars- which were later found to be fully operational- failing to consult the ship’s official paper navigational chart at any time, confusing the operation of the electronic chart system, and failing to disclose his medical conditions.

Communication problems with an emphasis on language were also stressed.

Cultural problems also related to poor communication between the master and the pilot. The NTSB report stated that the master did not feel comfortable questioning the pilot because of the pilot’s off-hand manner, which may have been due to the cultural differences. On the other hand, masters have to deal with all nationalities. And good bridge team management should be modelled to overcome this cultural divide.