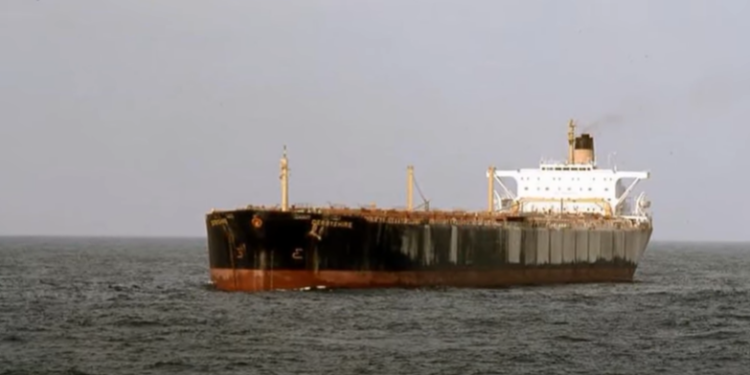 September 2021 marked 41 years since MV Derbyshire was lost at sea adding a black page to UK’s maritime history and redefining safety of bulk carriers. The vessel is the biggest British-registered merchant ship ever to have been lost at sea during peacetime and one of the few incidents where there was no distress call, no survivors, and no wreckage for many years.

On 11 July 1980, the 4-year-old OBO carrier left Sept-Îles, Quebec, Canada, heading to Kawasaki, Japan, with a cargo of 157,446 tonnes of iron ore onboard. The ship disappeared on 9 September 1980 during Typhoon Orchid under unknown circumstances. Notably, the crew never sent a distress call, although they had reported a severe tropical storm.

On 15 September, an official search began to locate the vessel but ended six days later, with no results. The ship was declared lost. The only trace found was a lifeboat seen by the crew of a Japanese tanker in the area six weeks later.

None of the 44 people onboard, including 42 crew members and two officers’ wives, were ever found and they are all considered perished in the disaster.

After several years of campaigns by unions and victims’ relatives under the “Derbyshire Families Association” for the official opening of an investigation into the causes of the accident, as well as two separate incidents of deck plating (frame 65) cracking in two of Derbyshire’s sister ships which unveiled flaws in design modifications, ITF funded a deep-water search mission to find the wreck, which was eventually found on 8 June 1994 off Okinawa, Japan and led to the reopening of the case.

Following two expeditions, the initial investigation outcome in 1998 was that the ship sank because the lid to a store hatch on the fore deck had been left unsecured, thus attributing the incident to crew negligence. After several years and conflicting theories as to what led to the sinking, the official cause was announced in 2000 and was traced in design flaws, noting that rough seas damaged the vessel’s deck fittings and hatch covers, subsequently leading to the chain locker, forecastle and then the cargo holds being flooded one by one, sinking the ship in less than two minutes.

Due to the use of a flushed deck, rather than the fitting of a more conventional forecastle, the mountainous waves caused by Typhoon Orchid were allowed to sheer off the covers of small ventilation pipes near the bow, which, over the next two days, caused seawater to enter into the forward ballast section of the ship and draw the bow slowly into the water.

As the bow dropped lower in the water, the sea started damaging the first hatch cover, which was not designed to withstand such conditions and flooded, opening the way for the others to flood too and eventually sinking the ship. In this final version, there was neither evidence that crew was responsible for leaving hatch covers open nor that the deck plating was flawed.

What makes the incident a valuable case study is not only the curiosity of how a 294-meter-long ship could simply disappear with no trace in the Pacific, but also the fact that it was only four years old, piloted by an experienced captain, built by a British shipyard and classed A1 by a top classification society for merchant ships. But most importantly, had it not been found, the reasons behind the disaster might never have been discovered.

Determining the causes of the accident is considered to have redefined bulk carrier safety, especially if we consider that about 17 bulk carriers were lost in the same year. Between 1980 and 1994, a total of 149 bulk carriers were lost with a total of 1,144 lives (most of which went unreported or uninvestigated), which highlighted serious concerns concerning bulk carrier safety design. This led to new design standards being implemented, including the strengthening of hatch covers, the installation of VDR (black box) on all existing cargo ships and newbuildings and the installation of cameras on the foredeck of all capesize bulkers, while it also triggered a research programme to investigate minimum strength requirements for ventilators and air pipes.

Significant recommendations to improve ship safety were put in place following the enquiries into the Derbyshire’s loss, and merchant ships are now built to higher standards so they can better withstand weather conditions,