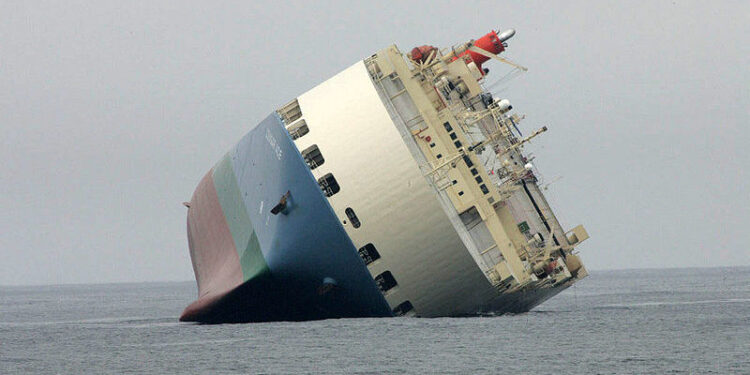 In 2006, the RoRo ‘Cougar Ace’, one of the biggest car carriers at its time, was involved in an incident that caused its entire cargo of almost 5,000 brand new cars to be scrapped. The incident highlighted issues related to the assignment of duties in a ship’s Safety Management System (SMS), within the context of ballast water exchange operations.

While en route from Japan to Vancouver, Canada on 24 July 2006, the Singaporean-flagged RoRo car carrier ‘Cougar Ice’ experienced severe listing to its port side and transmitted a distress signal requesting for immediate assistance. The ship was carrying a cargo of 4,812 new Mazda and Isuzu vehicles (4,703 were Mazda).

At the time of the incident, the ship was undergoing a ballast water exchange (BWE) in compliance with the Canadian Shipping Act.

USCG rescued all the 23 crew members onboard. There was no pollution as a result of the incident.

On 2 August 2006, tug Sea Victory began towing the listed vessel towards the Bering Sea in Alaska. On 8 August 2006, CA arrived at Unalaska Island’s Wide Bay and was secured to a mooring buoy where it was brought fully upright.

There were no instant fatalities as a result from the incident, as all of the crew members were safely evacuated. A steward reportedly broke his leg.

However, during salvage operations in July 2006, a naval architect identified as Marty Johnson, 41, slipped and died, as the salvage team was preparing to leave the Cougar Ace.

Although there were no crew fatalities or pollution, the accident attracted media attention as Mazda announced that all of its 4,703 brand new cars would be scrapped.

Surprisingly, the vast majority of the cars had not sustained major damages, despite being tied-down at severe angles onboard Cougar Ace for over a month. The initial plan was to be sold as used, but thorough engineering testing pushed the company to reconsider its initial decision. Only an estimated dozen of ‘survivors’ were sent to trade schools for service training.

We certainly didn’t save any money crushing. What we saved was our reputation,

The estimated cost of total cargo was US$103 million.

As the ship approached to Alaska on the afternoon of 23 July, the water from the starboard ballast tanks was drained without being refilled simultaneously, as ballast procedures require for ship stability to be maintained. This made the top-heavy ship to keel over almost instantly onto its port side.

US law requires that a ship’s ballast tanks be purged of the seawater taken on in foreign lands to avoid invasive species transfer into its marine ecosystem. This led media at that time to assume that ballast water rules had a lot to do with the incident.

The official investigation by MPA Singapore revealed that the sequential exchange of water ballast would result in the ship having 4 of its 9 water ballast tanks empty.

This, together with additional water ballast being pumped out for the adjustment of list, and the consumption of fuel from the ship’s double bottom tanks, resulted in the ship becoming unstable and developing an angle of loll to the port side of about 80°,

Considering the potential consequence of vessel capsizing, such instructions should be such as to be clearly understood and complied with by the Master, Chief Officer and persons involved in the BWE operations.

The incident highlighted the importance of implementing a robust safety management in line with the ISM Code. The investigation’s findings showed that the assignment of duties and responsibilities should be clearly defined and documented in the vessel’s Safety Management System (SMS), within the context of ballast water exchange operations.

With this respect, less than a year after the incident, the IMO sent out a circular giving precautionary advice to masters regarding the conduct of Ballast Water Exchange operations, which was approved at MSC 79 in December 2004.

The IMO also developed Guidelines for Ballast Water Exchange (G6) under the BWM Convention, although the Convention had not yet come into force. MEPC 53 in July 2005 adopted these guidelines. Apart from the environmental point of view, the guidelines addressed safety precautions associated with BW exchange, like stability.

It was noted, among others, that the Ballast Water Exchange Management Plan should contain duties of key shipboard control personnel undertaking ballast water exchange at sea. Such personnel should be fully conversant with the safety aspects of ballast water exchange and in particular the method of exchange used on board their ship and the particular safety aspects associated with the method used.

In the same context, MPA Singapore informed the vessel’s owners to provide guidance to the ship’s staff on the stability criteria to be maintained at various stages of ballast water exchange operations.

Every officer in charge of BWE serving on a particular ship would therefore carry out BWE operations in accordance with the plan(s) in which the stability calculations have been fully worked out and endorsed. We have also informed the owners to systematically establish and assign the tasks involved in ballast water exchange operations to qualified shipboard personnel, and such tasks, roles and responsibilities…should be clearly defined and documented in the vessel’s Safety Management System (SMS).

Approximately 2,871 new cars -BMWs, Volvos, and Saabs- lied at the bottom of English Channel when the Norwegian car carrier Tricolor sank in December 2002, while 3,000 new Hyundais and Kias and 1,000 used Japanese cars went down when the car carrier Hyundai 105 sank off Singapore in China Sea in May 2004.