Year in Review: Top shipping stories to remember from 2018 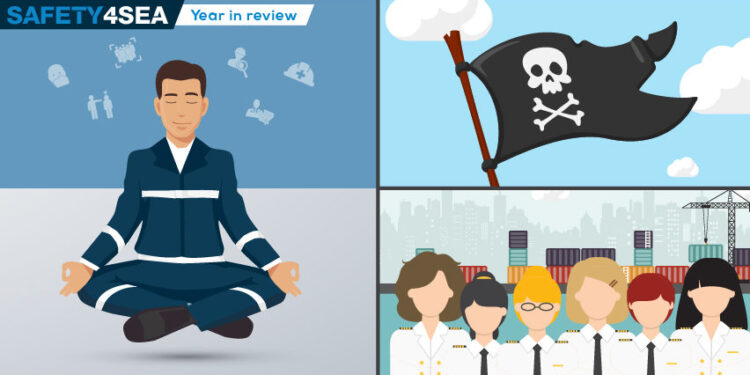 As 2018 is reaching its end, we decided to provide a recap of the key developments mixed with subsequent challenges that shaped the maritime landscape of this year. From the unprecedented opportunities that blockchain brought on the spotlight, to the unforeseen evolvement of the shipping regulatory framework that shifted the industry toward a more sustainable approach, the past year claims the title of a turning point for the future of shipping.

In 2018, the world’s largest container shipping company, Maersk, and its multinational technology partner, IBM, named their joint blockchain venture, marking a major step towards the upcoming transformation of global trade.

Blockchain seems to emerge in many industries every day, including the maritime, an industry which has been showing more and more interest in innovative technologies over the last years.

Blockchain, as a secure and decentralized shared database, forms the basis for the so-called ‘Smart Contracts’, as it ensures that no one person exclusively controls it, improving transparency and reducing paperwork complexity and costs.

Except from the field of trade, blockchain has recently opened new routes in bunker industry with the establishment of BLOC Consortium, in the offshore drilling industry with the launch of the world’s first Blockchain Drilling service, the marine insurance with the official launch in service of the world’s first blockchain platform for marine insurance, as well as for ports -from Antwerp to Brisbane- to ease complexity of operations.

In November, Japanese NYK announced it would launch its own digital currency to pay seafarers, while a consortium of key energy majors, including BP, Equinor, Shell, Gunvor and Mercuria, announced the launch of the world’s first fully operational, enterprise-grade blockchain platform to enter the oil and gas industry.

It is awaited that this emerging technology will occupy more and more parts of the industry in the near future.

The industry showed an increased interest this year in augmenting the role of women in shipping, an industry that seems to lack any element of gender equality. Following approval by the IMO Council, WISTA is able from 2018 and beyond to use its consultative status to promote diversity and enhance women’s empowerment.

UK has been at the forefront in the fight for gender balance with highlights including the signing of the ‘Women in Maritime pledge’ by major British businesses and trade bodies, the establishment of a Taskforce to address fairness by Maritime UK and the launch of ‘women in maritime charter’ also by Maritime UK, and many others.

Additionally, Hellenic Seaways, the Greece-based coastal ferry operator, announced the appointment of the first female First Engineer onboard a merchant ship in Greece, a country that struggles to achieve gender equity in many aspects of professional life.

Moreover, in a prestigious ceremony in October, Malta’s government representatives gathered with WISTA members to honor the country’s first five female Master mariners, as this is considered to be a pivotal moment for Malta’s rich maritime tradition, while in another ceremony also in October, UK MCA, with the presence of Princess Anne, awarded Captain Belinda Bennett of Windstar Cruises the Merchant Navy Medal for Meritorious Service, as ‘the first black female captain in the commercial cruise industry’.

Women were also promoted in key management positions in the past year. EMSA Administrative Board nominated Ms. Maja Markovčić Kostelac as the next EMSA Executive Director, Sadan Kaptanoglu was selected to become BIMCO’s first woman President in June 2019, while Ms. Quah Ley Hoon will be appointed as the Chief Executive of the Maritime and Port Authority of Singapore (MPA), as from 1 January 2019. According to WISTA, Norway was ranked first in gender equality in the maritime, where women account for 42% on company boards.

Highlight: IMO shed its efforts in 2018 to raise awareness on the issue, with the decision to set ‘Empowerment of women in the maritime sector’ as the theme of World Maritime day for next year, several trainings for women in port management, as well as the first International Conference of Women in Fisheries, that took place in Spain, in November.

The Panama-registered oil tanker ‘Sanchi’, operated by National Iranian Tanker Co, was sailing from Iran to South Korea, carrying 136,000 tonnes of condensate, when it collided with the ‘CF Crystal’, on 6 January 2018, off Shanghai and went ablaze. After burning for more than a week, it eventually sank, causing one of the worst oil spills in over 30 years. The entire 32 crew perished in the accident.

The 14,000 TEU container ship ‘Maersk Honam’ was heading to Suez when it sustained a serious fire on one of its cargo holds. 22 crew members were rescued, while five were killed.

A total of 224 people died when the ferry ‘MV Nyerere’ capsized in Lake Victoria, off Tanzania, in September, due to overcrowding.

A panel responsible for the investigation the 2014 Sewol ferry disaster announced in August that it did not find the exact cause of the ship’s sinking after an effort that lasted one year, leaving many issues unanswered for one of South Korea’s worst maritime tragedies.

In early 2018, NTSB released its full report on the sinking of the ‘El Faro’ in October 2015, the deadliest shipping disaster involving a US-flagged vessel in more than 30 years, confirming that the tragedy was attributable to the captain’s poor assessment of the situation.

Three years after the ship went down, investigations and studies regarding the accident still attracted attention this year. NTSB issued a short film summarizing the accident, as well as an illustrated digest report, summarizing key safety issues and recommendations, on the sinking.

The case ended up to be one of the most challenging and intensive investigations the NTSB had ever undertaken. As the official reports by NTSB, as well as by USCG, have shown, the key cause of the accident was the Captain’s failure to handle the ship against the storm and make appropriate use of weather data, as well as his late decision to muster the crew. In general, both USCG and NTSB found many similar conclusions regarding the underlying systemic challenges in the safety framework, Rear Admiral John P. Nadeau, USCG, noted in an exclusive interview with SAFETY4SEA.

Piracy in GoG up

If 2017 was remembered for a resurgence in Somali Piracy after a calm five-year period, the 2018 will be remembered for a dynamic danger presence in Nigerian waters and Gulf of Guinea which has been a main security concern for vessels and crews from the very first days of the year.

The Marshall Islands-flagged tanker ‘MT Barrett’ went missing on 10 January while anchored off Benin in what it was later confirmed as a piracy attack. Shortly after, on 2 February, the ‘Marine Express’ tanker, operated by Hong Kong-based Anglo-Eastern, also went missing while underway off Benin. Although both incidents had happy ending, the proximity of time and location rose security concerns for this region.

According IMB, a total of 156 incidents of piracy and armed robbery against ships were recorded globally in the first nine months of 2018 compared to 121 for the same period in 2017.

The Gulf of Guinea accounted for 57 of the 156 reported incidents globally, while an impressing 37 out of the 39 crew kidnappings for ransom globally took place in these waters, in seven separate incidents.

In Asia alone, the number of actual incidents reported during January-October 2018 was the lowest among a 10-year reporting period, with a total of 70 incidents comprising of 56 actual and 14 attempted incidents.

Highlight: A landmark proposed MLC amendment in April by the Special Tripartite Committee of the ILO will mandate that the seafarers’ wages and other contractual entitlements will continue to be paid in case the seafarers are abducted by pirates and during the entire period of captivity.

Mental health has been a growing topic for the business world globally and for shipping included with the launch of several initiatives to raise awareness for the welfare of seafarers, who have earlier been seen more as an occupational part of the ship rather than human beings with their own personality complexities and problems.

Seafarers’ rights to be treated fairly and enjoy quality of life at sea was the focus of this year’s Day of the Seafarer campaign, on 25 June, under the theme ‘Seafarer’s wellbeing’. Other highlights included:

Highlight: On the occasion of the Day of the Seafarer, Inmarsat issued the results of a study revealing that Internet onboard reduces crews’ emotional stress.

The consolidation trend continued in 2018 as part of the companies’ efforts to overtake the competition.

Enclosed space entry is the hidden enemy for crews as the hazard is not always obvious. Although the industry has repeatedly rung the bell on this, a resurgence of incidents globally, with a total of 8 related fatalities reported from September to November on four different ships, highlighted the need for more awareness. The ships involved were the general cargo ship ‘Appolo Kita’, the bulk carrier ‘American Bulker’ and two other RMI-flagged vessels.

Highlight: InterManager launched a campaign to stimulate seafarers to think about safety issues when working in enclosed spaces and encourage them to identify and share measures which they believe would reduce risks.

Drones are here to stay

A broad range of industries has been showing increased interest in Unmanned Aerial Vehicles (drones) in last years, mainly due to the relaxation of stringent regulations around their use. In maritime industry, drones gained a larger position mostly on the field of maritime surveillance, as a way to save time and money and to enhance workforce safety.

Highlight: In late 2018, ISO published a draft version of the first ever set of standards for drone operations to apply globally, in a bid to make drone operations safer and more efficient.

If 2018 paved the way for change in the industry’s mentality on the field of compliance, sustainability and technology innovation, 2019 is expected to bring an even more disruptive change in the whole range of how the industry operates. Either the drivers are stringent regulations or new technologies, the only thing we can expect for sure is that shipping will continue to reform in a pace that cannot be predicted.