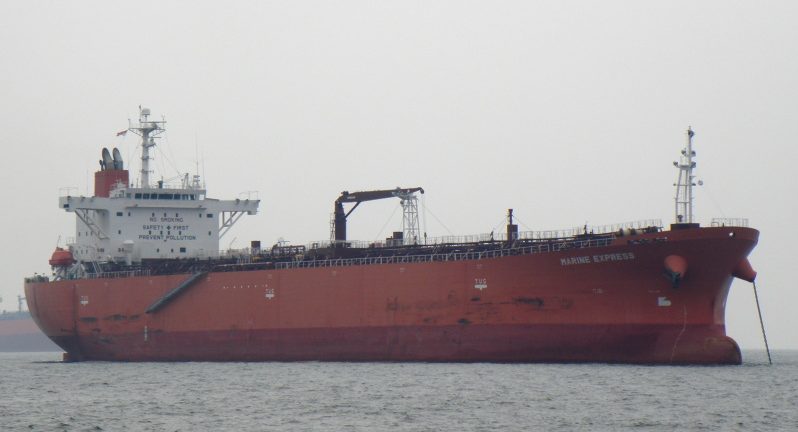 The tanker 'Marine Express', which had been missing in the Gulf of Guinea since Friday and was feared to be hijacked by pirates, is now back under the command of the captain and crew, with all crew members reported to be safe.

The ‘Marine Express’ tanker, operated by Hong Kong-based Anglo-Eastern, was last seen in Benin’s waters at 3:30 a.m. on 2 February, after which contact was lost, the company informed. The cause was unknown though, despite suspects that the ship had been hijacked.

The company launched an investigation in cooperation with Nigerian and Beninese authorities.

We are delighted to report that the MT Marine Express, which was hijacked by pirates on Feb 1, is now back under the command of the captain & crew since ~04:00 SG time today. All crew members are reported to be safe & well & the cargo intact. We thank you all for your well wishes

The incident comes less than a month after the Marshall Islands-flagged tanker ‘MT Barrett’ became subject of a piracy attack in Gulf of Guinea. The tanker was at anchor off Benin, West Africa, when communications were lost on 10 January and the owner company, Union Maritime, confirmed that the ship had been hijacked. After captivity of six days, the ship was released and all 22 crew were reported safe.

Despite piracy data seem to decrease globally, the Gulf of Guinea has been a main security concern for vessels and crews, over increasing piracy attacks in the last months. IMB’s annual report indicated the persistent danger in the region as a piracy highlight in 2017, with 10 incidents of kidnapping involving 65 crew members in or around Nigerian waters. Globally, 16 vessels were also reported being fired upon, including seven in the Gulf of Guinea.