Blockchain ventures in shipping: Where we stand

Recently, the world’s largest container shipping company, Maersk, and its multinational technology partner, IBM, named their joint blockchain venture, marking another step towards the upcoming transformation of global trade. Blockchain seems to emerge in many industries every day, including the maritime, an industry which has been showing more and more interest in innovative technologies over the last years. But what are the benefits that shipping could take advantage of and how could this new technology boost the industry efficiency?

What is the problem

The supply chain at its current form prerequisites paper documents and physical involvement of the numerous parties, leading to increasing costs and uncertainty. Within the current shipping transaction world, there is no single party which can access all aspects of the supply chain, while the lack of accountability for inefficiency of parties or fraud create an insecure transactional ecosystem.

In addition to this, the involvement of numerous brokers to ease processes adds significantly to the costs. According to the World Economic Forum, by cutting obstacles within the international supply chain, global trade could increase by almost 15%. This triggers the need for a smart solution that could eliminate these obstacles.

In 2009, the very first familiar aspect of blockchain was introduced by a source named Satoshi Nakamoto, who shared a protocol that allowed for peer-to-peer exchange of digital cash, eliminating the need for trusted third parties. Since then, many companies have shown interest in developing their own version of a blockchain for financial or other uses.

Blockchain, as a secure and decentralised shared database, forms the basis for the so-called ‘Smart Contracts’, as it ensures that no one person exclusively controls it: All the documents required for the transaction are uploaded into the blockchain network, where negotiations with counterparties are taking place. As relevant parties sign their relevant contracts, the system approves and moves the transaction to the next stage, eliminating the need of intermediaries, and the risk of human error, while reducing the procedural delays costs, as well as ensuring protection of the transaction with the encryption of information. Namely advantages include:

-->Real-time processing:  The process becomes more eased and automated as the exchange of information requires some minutes instead of week-long mailings.

-->Security: Except from the fact that formation is encrypted, blockchain shall not allow any modifications in the stored information which eliminates frauds related to documentation.

-->Transparency: With their access key, every party has access to the whole of the transaction information, which boosts transparency and facilitates risk assessment for the involved parties.

-->Accuracy: Automation of the process means zero errors when compared to human involvement.

-->Cost-saving: The complexity of traditional procedures, including potential delays, errors and use of intermediaries, often creates costs, which can be eradicated through smart contracts.

So how the shipping industry has recently acted to reap the benefits of new technology to upgrade its services and efficiency? Below are some of the most notable developments in recent months with respect to the emerging uptake of blockchain in the maritime.

Announced in early 2017, the aim of the new company, TradeLens, will be to develop a global trade digitization platform that will move all administrative burden associated with a container shipment to the internet.

In this way, the system can reduce trade documentation and processing costs and eliminate delays associated with errors in the physical movement of paperwork, while also providing real time insight into cargo, as this advances through the supply chain.

The Maritime Silk Road concept, unveiled by China in 2013, seeks to enhance infrastructure connectivity throughout Southeast Asia, Oceania, the Indian Ocean, and East Africa. Together with the Silk Road Economic Belt, which focuses on the equivalent development across Central Asia, the two strategies form the One Belt One Road (OBOR) initiative designed to bolster China’s influence across Asia.

On this context, the Maritime Silk Road Platform and the Chinese blockchain firm Yuanben recently inked the "Blockchain Technical Service Cooperation Agreement". Under the deal, Yuanben’s blockchain will be used to boost sea-going cargo transportation for the Maritime Silk Road, with node deployment, digital content deposit certificates, and a search interface for cargo tracking. Security of data transmission will be also ensured thanks to the system’s Decentralized Trusted Content Protocol (DTCP).

Namely, the consortium seeks to evaluate how blockchain could help to provide ‘an efficient chain of custody on quality and quantity recording activities, together with a reputation system of the compliance of fuels prior to purchase, benefitting both buyers and regulatory bodies’.

This could provide greater confidence in the fuel market, ultimately providing a more trustworthy framework for accurately monitoring emissions from shipping.

On 19 August, the first ever blockchain-based CargoX Smart Bill of Lading successfully passed test, during a trial shipment onboard the cargo ship Ever Safety, which arrived in the Port of Koper from Shanghai. The Bill of Lading for this shipment was issued electronically and transferred with a blockchain network in minutes. According to CargoX, this solution could reduce the Bill of Lading issuing and processing costs by up to 85%.

In a bid to reduce costs for oil and gas operators, Houston-based Diamond Offshore Drilling announced the launch of a Blockchain Drilling service, what it claims to be the first application of blockchain technology in the offshore drilling industry. Developed in partnership with Data Gumbo Corporation, the service will be implemented fleet-wide on the company's drilling rigs, to create 'the industry's first Blockchain Ready Rig fleet'.

As part of the port’s efforts to pioneer in the field of innovation, the Antwerp Port Authority and the Antwerp blockchain start-up T-Mining developed in June a pilot project to make document flows more efficient, while automating the administrative processes. Under the project, documents, such as certificates of origin and phytosanitary certificates, are transferred via blockchain and the document flow is automated by means of "Smart Contracts".

Meanwhile, PwC Australia, the Australian Chamber of Commerce and Industry, and the Australian Port of Brisbane joined forces in May to develop a ‘Trade Community System’, intended to link supply chain information through blockchain to eliminate complexity in trade.

In early June, Maqta Gateway, an Abu Dhabi Ports subsidiary, became the first Abu Dhabi entity to develop its own blockchain technology, combined with digital user identities to link stakeholders across the trade community, with more security and transparency. The new technology, Silsal, seeks to provide easy access to transaction status updates, reduce the need for paperwork, calls and physical visits, as well as to speed up information exchange overall.

As part of the government’s strategy to promote digital growth in Denmark, earlier in 2018, the Danish Maritime Authority announced it would use blockchain technology to reduce administrative burdens in trade and ship registration processes. The project is one of the first blockchain projects in the Danish public sector, expected to start in 2018 and run until early 2020.

The world’s first blockchain-based platform for electronic certificates of origin (eCOs) was presented in Singapore by the Singapore International Chamber of Commerce (SICC) and Singapore-based vCargo Cloud (VCC) in May. The platform seeks to improve transparency, security and efficiency in authenticating trade documents. It permits instant verification of eCOs and runs on a private blockchain network that prevents fraud, alterations and third-party interference.

-First blockchain platform for marine insurance available for use

Following few months since the announcement of the world’s first blockchain platform for marine insurance, the platform became available for commercial use in 2018 with a view to expand into other types of business insurance including marine cargo, global logistics, aviation and energy sectors. The partners involved are EY, Guardtime, Maersk, Microsoft and insurance industry leaders Willis Towers Watson, XL Catlin, MS Amlin and ACORD.

-Blockchain for the container sector

Earlier in 2018, the world’s first freight container registry and global platform for transactions and container handling was announced by Blockshipping.

As explained, the GSCP platform will be based on blockchain and modern sensor technology, based on a new Danish framework called “The ICO 2.0 Framework” which aims to increase quality standards by making sure that future Danish ICOs are compliant with Danish law. The GSCP ICO offers contributors a set of token features including the both economical and environmental benefits. Namely, the platform has the potential to  save the global container industry a minimum of 5.7 billion USD annually  and at the same time to reduce CO2 emissions worldwide by a minimum of 4.6 million tons.

North P&I Club has issued a table citing some of the solutions currently being developed for shipping: 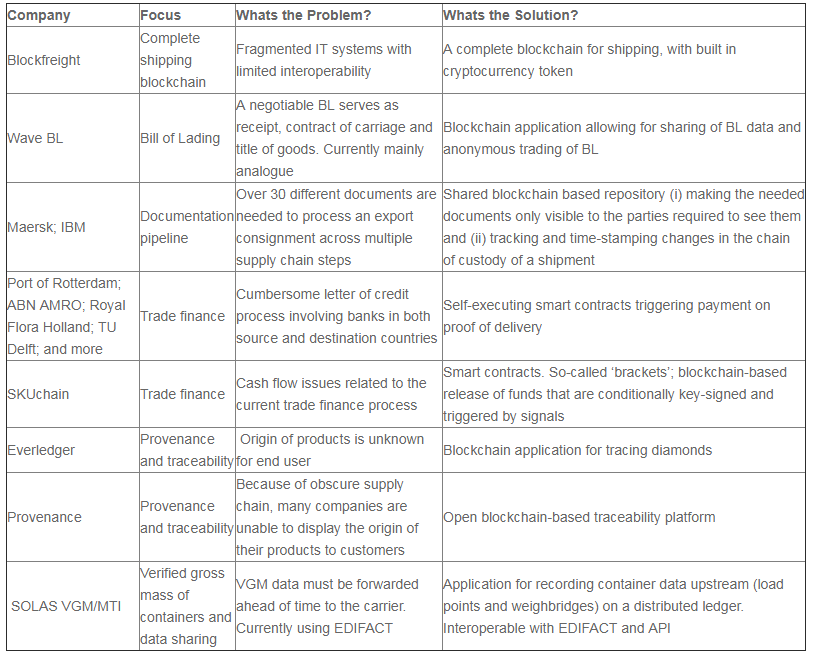