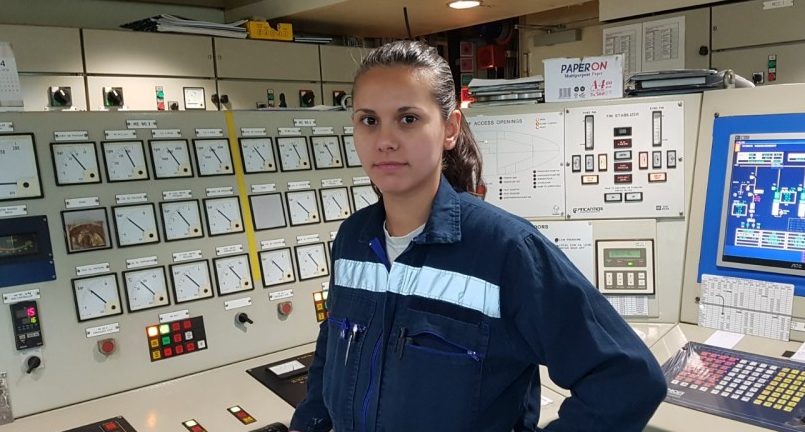 Aiming to promote equal gender opportunities to all its employees and as part of its corporate culture, Hellenic Seaways, the Greece-based coastal ferry operator, announced the appointment of the first female First Engineer onboard a merchant ship in Greece.

Theano Sileloglou belongs to the human resources of Hellenic Seaways since 2010, where she began her career as a C Engineer on the ship "Nissos Mykonos". Gradually, she was promoted to B Engineer in 2013, and she was eventually upgraded to A Engineer, in March, the company informed.

Although women form 39.3% of the global workforce, women seafarers constitute only 2% of the total number of seafarers worldwide, creating a need for the shipping community to bridge this gender gap. Harassment, bullying, and stereotyping are identified among the key factors that impede women's employment onboard.

Several organizations, unions and companies have set the ground in the last decade for creating a greater awareness to people generally and sensitize specifically the male seafarers towards acceptance of women onboard.

On the same context, Hellenic Seaways, part of Minoan Lines, seeks to break obsolete stereotypes and "overturn the data in the male-dominated world of coastal shipping, paving the way for the industry". The company said in an official statement:

This is undoubtedly a positive development for the issue of equal opportunities in the business environment. It is well known that the shipping industry is historically a highly male-dominated industry. This 'tradition', which has survived over the years, is gradually reshaping. Practices such as Hellenic Seaways and initiatives such as the IMO for the Inclusion of Women in Shipping are catalytically contributing to the rapprochement of this issue and the creation of an environment where career development in the maritime professions will not depend on the gender, giving the example in the coastal sector.

In early March 2018, the cruise sector saw a progress on gender equality, as Nicole Langosch was appointed as AIDA’s first female captain, in the vessel AIDAsol. Currently, AIDA Cruises employs 14 female nautical officers aboard its fleet.