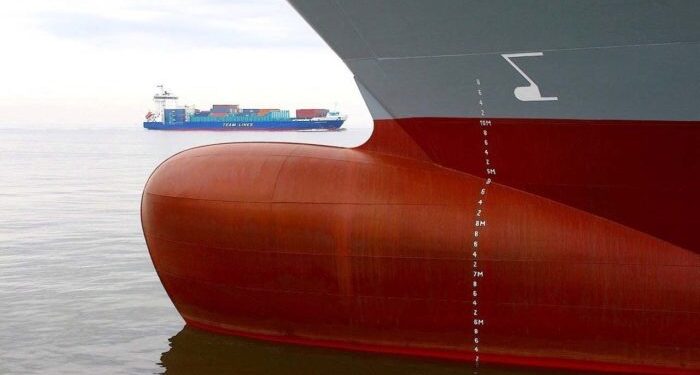 Ships are extraordinary designs, which even with just their size can amaze. But there is one specific element of a ship’s design that stands out, and what is more, not many know what it does exactly. We are talking of course, about the bulbous bow. The bulbous bow is that strange protrusion at the ships’ forward end, sticking out below the water. It serves a very important role for the ship, and in this article we are going to analyze it. Disclaimer: The article contains a little bit of maths, but don’t worry we will keep it simple.

What is a bulbous bow

Without a doubt, at some point of your life, you have made the question, while looking at a ship: What is this metal in the front?

Well, it is called the bulbous bow. The name origin is simple, as this structure generally resembles the shape of the bulb, and is always placed at the bow of the ship. Hence, bulbous bow, and it serves a very specific purpose.

How does a bulbous bow work

First of all, it is important to remember that bulbous bows are all designed specifically for a certain ship, in which they are fitted. To understand its operations, let’s consider a vessel without a bulb fitted: the Titanic.

As the Titanic moves through the water, a pressure wave builds up at the front of the ship. This move increases the height of the water, with the ship pushing it ahead. But that water has to go somewhere.

What happens is that, the water flows back down the side of the hull, and will keep flowing back down, creating a wave all the way along the hull.

Of course, having a constant wave on the side of the hull is an issue, as it will increase the drag of the vessel. This happens as the Titanic is now in contact with a larger surface area of water, which is coming higher up the hull.

We need to find a way to mitigate this wave. This is where maths come in. There is a certain mathematical model that explains the solution. The following graph resembles the move of the wave in a ship without a bulbous bow.

If we add another curve on the same graph, that is 180 degrees out of phase with the initial curve, they will actually cancel each other out.

If this model is applied on a ship, it could mitigate the initial wave that is causing all that drag.

What are the new results? Less drag, as well as less fuel consumption.

According to a 1978 paper by Alfred Kracht – one of the most comprehensive studies on bulbous bows – a Computational Fluids Design (CFD) analysis is crucial.

Such an analysis will optimize the bulb and ensure that it is built in a good shape. However, the minimal scope when designing a bulbous bow should include at least the following two design cases:

Both of them are crucial, as without the base case, the CFD may provide incorrect results, and the bulb will not actually help; it may even add to the fuel consumption. 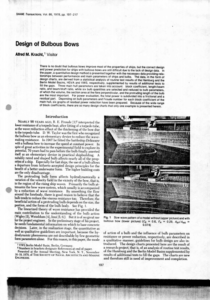 The limits of bulbous bows

As we said above, bulbous bows are specifically designed for a certain ship, and they only work when they are applied correctly.

But the speed of the vessel also plays a key role in the efficiency of the bulb. Namely, the wavelength of the two wave systems we mentioned earlier, changes depending on the vessels’ speed. What is important to have in mind, is that those two waves only line up at one speed. In fact, a difference of just 2 knots from the ship’s design speed could harm the efficiency of the bulb.

For this reason, bulbs are recommended for ships that will spend the majority of their entire life at one specific speed. This is an issue with many extensions. For example, if fuel prices increase, slow steaming may become attractive. But in that case, it is possible that the bulb will not help as much.

However, despite these limitations, many ships that have bulbous bows will experience major fuel savings. But, this will only happen if the bulb is installed correctly. Investing in engineering is key if you are going to use a bulb.

Another area of concern is the fact that bulbous bows are designed assuming calm water conditions. But such conditions are rare in the ocean. However, the industry has discovered that for the majority of storm conditions, the bulb can still work properly.

The limitation exists when especially large waves or small vessels come into the picture. In these cases, the bulb could not be able to create a steady wave system.

Therefore, it can be understood that fast ships, with low block coefficient, are not the best candidates for bulbous bows. As a matter of fact, they can drop in performance very quickly, even with normal sea state.

On the other hand, big, slow ships, with a high block coefficient, are good candidates. So, what ships are fit to be equipped with bulbous bows? These could be large freighters that are operating on a fixed schedule, such as:

and cruise ships as well.

Getting a ‘nose job’

As we said, slow steaming can sometimes be an attractive choice, but a different speed could cancel out the efficiency of the bulbous bow. Enter ‘nose jobs’.

‘Nose job’ for ships means the replacement of the bulbs to ensure better performance in slow steaming environments. A new bulbous bow could provide better fuel savings, while they could also contribute to CO2 emissions reduction.

Maersk is the leader in ships’ ‘nose jobs’, having carried out about 12. This operation has gained for the company fuel savings of around 5%. What is more, NYK Group has achieved 23% reduction of CO2 emissions over six months.

As anyone can understand, a properly researched and installed bulbous bow, can enhance the fuel efficiency for ships. But the key word here is properly. If the study of the bulb provides wrong results, or if there is a mistake during the installation, then the bulbous bow will not be able to provide its benefits. We hope now that next time you will see a bulbous bow on a ship you will know what it does, and – why not – brag about it to your friends.