How many of us thought we misheard the first time of hearing ‘poop deck’? 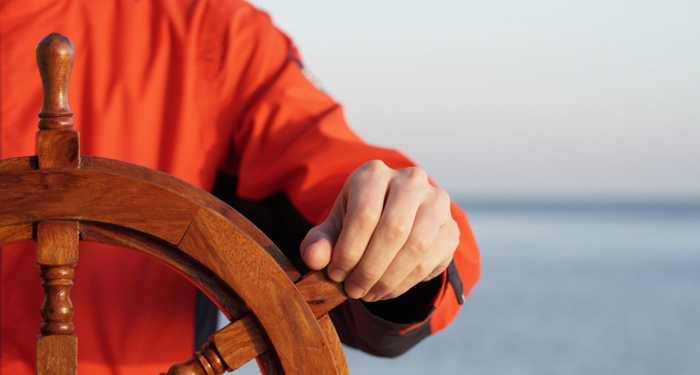 Shipping is a globalized, particularly multicultural industry with the English language being typically the main communication tool connecting people with various ethnic backgrounds.

However, even for native speakers, the shipping terminology includes words not widely familiar, but critical to know before embarking on a ship for the first time. This jargon has its roots back to the 16th and 17th century but is used until today. Can you think of some examples?

“Aft” or “stern”: The back part of the ship. The difference between the two terms is that aft is the inside (onboard) part of the vessel, while stern refers to the outside part of the vessel. As an adverb, it is used to describe the “towards the stern” of a vessel.

“Bow”: The word possibly originates from Middle Dutch ‘boech’ and refers to the front part of the ship or the point that is usually most forward when the vessel is underway. The forward part of the bow is called the “stem” or “forestem”. The bulbous bow is this strange protrusion at the front of a ship just below the waterline and is vital for ship efficiency and stability. Here SAFETY4SEA explained it better.

“Starboard”: The right side of the ship (when looking towards the bow). It derives from the Old English word ‘steorbord’, meaning the steering side of the ship, because ships in the old days were steered with a steering oar on the right-hand side, as most people were right-handed.

“Port”: The left side of the ship (when looking towards the bow). Since the steering oar was on the right side, the ship would tie up at the wharf on the other side. This is why the left side was called “port”.

Port and starboard are defined regardless of which way the observer is facing. Here you can find a more in-depth explanation.

“Rudder”: Rudder is defined as “part of the steering apparatus of a boat or ship that is fastened outside the hull”; basically, a flat piece located at the aft of the ship, acting as a primary control to steer it and maneuver it. The hydrodynamic efficiency of a rudder helps the ship turn, but it doesn’t turn the ship by itself. In small boats, the rudder is a flat piece of wood, fiberglass, or metal manually operated by a helmsman through a lever arm, but larger vessels control the rudder via steering wheels. On large ships, the type and location of the rudder is of particular naval importance, depending on the hull and propeller design.

“Poop deck”: The poop deck, originating from the French word for stern “la poupe”, is a deck at the rear of a ship, generally formed by the roof of a cabin. Technically, it is a stern deck, which in sailing ships was usually elevated as the roof of the stern or “after” cabin, also known as the “poop cabin”. If a wave washes over this deck from behind the vessel, it is “pooped.”

“Bilge”: The bilge is the lowest compartment of the ship, sitting below the waterline. The bilge contains water that has not drained off the ship’s hull potentially coming from rough seas, rain or internal spillage, which is pumped out to prevent threatening the ship. Large commercial vessels need bilge alarms to notify the crew if and where the bilge water level is rising.

“Boom” (in sailing): The big, horizontal metal thing that sticks out from the mast and is attached to the foot of the sail, to control sail. The boom must be placed towards the direction of the wind in order to move forward or backwards.

“Tacking”: Tacking is a basic sailing practice, which refers to turning the bow through the wind so that the wind changes from one side of the vessel to the other side.

“Jibbing”: The opposite of tacking, referring to turning the vessel’s stern through the wind so that the wind changes from one side of the vessel to the other side.

“Windward”: The direction in which the wind is currently blowing.

“Leeward”: The opposite direction of the wind.

Did you know? -3 everyday phrases with a nautical origin