A Bunker Delivery Note (BDN) is the standard document required by Annex VI of MARPOL, which contains information on fuel oil delivery. It is the responsibility of the fuel oil suppliers to provide the bunker delivery note, which must remain on the vessel, for inspection purposes, for a period of three years after the fuel has been delivered. But, what information exactly should A BDN include?

MARPOL Annex VI and the Protection of the Sea (Prevention of Pollution from Ships) Act 1983 mandate that specific information must be contained on the bunker delivery note, which is provided to a ship receiving bunkers. This information includes:

Further, the seal number of MARPOL sample label must be included in the Bunker Delivery Note for cross-reference purposes.

In addition, in the beginning of the year, on 1 January 2019, amendments to the bunker delivery note regarding the supply of marine fuel oil to ships which have fitted alternative mechanisms to address sulphur emission requirements entered into force.

The amendments aim to address situations where the fuel oil supplied does not comply with low sulphur requirements, but has been supplied to a ship which is using an alternative compliance method to comply with the 2020 sulphur cap, such as scrubbers.

When the new regulatory text was adopted, there was a need for clarifications regarding the two specific sub-conditions of the purchaser’s specified limit value, justifying supply of high sulphur fuel oil (HSFO).

The clarification on the matter said that, as there was no tick box against the two sub-clauses, the third tick box only requires the sulphur value specified by the purchaser.

However, there are many who claim that the new supplier’s declaration obliges suppliers to make sure that the vessel has an approved scrubber before supplying fuel with sulphur exceeding the sulphur limit.

IBIA notes nevertheless, that this is not the case and the regulation is clear. It specifically requires bunker suppliers, if asked to provide fuel that it surpasses the sulphur limit, to do so only on the basis of receiving a notification from the buyer that the fuel is intended to be used compliantly. In fact, the supplier does not have to check if this is the case, only to obtain a ‘notification’.

Nonetheless, despite the clarifications given, IBIA states that they could prevent confusion more effectively. This can be achieved by stating the actual sulphur limits associated with each tick box, as well as a format that enables suppliers to provide assurance that they are meeting the 0.50% limit.

On the other hand, if the BDN only states that the supplier is providing fuel meeting the sulphur cap, they are only guaranteeing max 3.50% up to and including 31 December 2019.

For this reason, IBIA created and recommended a specific format to enhance clarity: 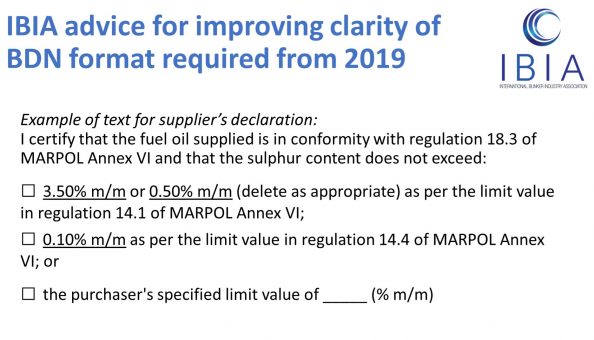