With IMO 2020 just around the corner, the shipping industry must already have a plan to comply. However, despite the fact that we are just two months away from this groundbreaking regulation for maritime, there is increased uncertainty regarding compliant fuel oil availability worldwide. In such case, companies should have a plan to deal with such unavailability, with the answer might lying in the Fuel Oil Non-Availability Report (FONAR).

Compliant fuels are a certain way to comply with the 2020 sulphur cap, which mandates that the sulphur content on fuels must not be over 0.5%. However, today there is increased uncertainty surrounding the availability of these fuels.

As it can be understood, it is possible that a ship would not be able to bunker compliant fuel, in spite of its efforts. IMO, during its MEPC 74, discussed this possibility, concluding that in such cases, operators must submit a fuel oil non-availability reporting (FONAR).

What is a FONAR?

As said above, it is possible that despite best efforts, a ship could not obtain compliant fuel. In these cases, the ship must complete a FONAR, while also notifying its Flag State, as well as the competent authority of the port of destination.

The FONAR means to capture this information, as the ship should not be required to change its intended voyage or unduly delay the voyage in order to comply with the 2020 sulphur cap.

The evidence that compliant fuel was not available can be shown through documentation, statements and correspondence, indicating that all possibilities were considered to obtain compliant fuel. If the ship decided not to bunker compliant fuel because of fuel oil quality concerns, taking into consideration safety and operational problems, such concerns must be thoroughly documented, and they must be supported by proper equipment or the engine manufacturer’s recommendations.

What information should a FONAR contain

In order to help shipping companies understand more about the use of FONARs, IMO has developed a standard format for reporting fuel oil non-availability. The following factors should be considered before deciding whether to bunker non-compliant fuels: 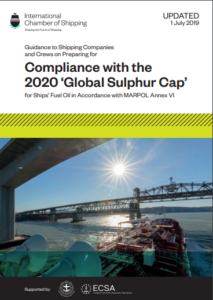 Is FONAR a ‘’free pass’’ to non-compliance?

The idea that a FONAR could be considered as a 'get out of jail free' card is misunderstood, as it is a mechanism for ships to self-report non-compliance.

According to BIMCO, a FONAR does not mean that the authorities of the port state will be more lenient towards the non-compliant ship. For this reason, ships should submit the FONAR before arriving to the port, while they must also inform the flag, the P&I Club and class, in order to consider the solution.

Nevertheless, even if the ship has done everything right in submitting the FONAR, still the cost for its non-compliance could be massive. A reason for that could be that the vessel must get rid of the non-compliant fuel before leaving the port. Moreover, debunkering could eventually lead to a high cost, while it may also result to more than a fine.

Being detained and asked to debunker the non-compliant fuel could have a severe impact.

In the same wavelength, IBIA warns that the repeated use of FONARs could also raise suspicions of abuse, which could in turn lead to more frequent investigations of the ship.

Furthermore, ships must consider another tricky situation. What a vessel would do if there is a bunker delivery note (BDN) saying that the fuel is compliant, but its test programme results clearly suggest it is not. In such cases, a FONAR does not provide cover, assuming that the ship should had been supplied compliant fuel oil.

What is more, the IMO’s reporting area, GISIS (Global Integrated Shipping Information System), is another area of concern. Currently, it is not clear how FONARs would be reflected on GISIS, which already has a module for reporting non-availability of compliant fuel oil. Of course, the system can be improved, like attempts efforts to verify the information submitted.

Reasonably, the magnitude of the change the 2020 sulphur cap will bring to the shipping industry, creates many uncertainties. These will be amplified if compliant fuel is unavailable. IMO has tried to resolve such cases with the use of FONARs, however operators should consider one important issue; FONARs should be the last option, and are not a 'get out of jail free' card to avoid non-compliance penalties.