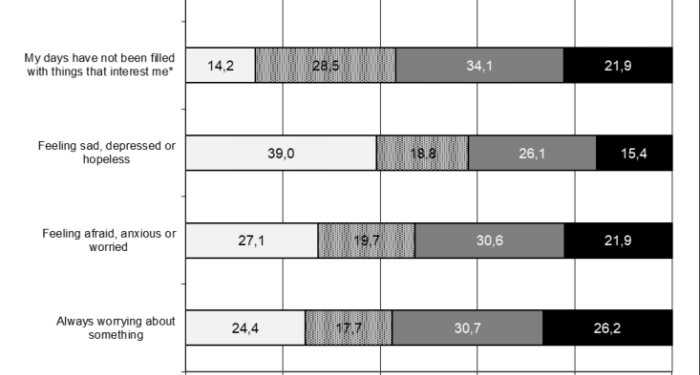 Mental health during the last seven days. Numbers show the percentage of respondents who chose a particular answer category in response to a particular question. *This question was worded positively in the survey and was reverse-coded for the report

The World Maritime University issued a report focusing on the experiences of seafarers during the COVID-19 pandemic, addressing the challenges they face and identify factors that may mitigate the negative impact of the pandemic.

The seafarers surveyed where asked how the COVID-19 pandemic affected different aspects of work and life on board, their family and their employment.

20% of respondents reporting a very high or high impact in each of these areas. By far the most seriously affected area, according to survey responses, were crew changes, followed by ship-shore interactions.

The survey also included questions on the current workload of respondents and the crew as a whole, compared to the workload before the pandemic.

5.2% of the respondents reported that they experienced a decrease in their workload. 6.6% of their crew.

Concerning the effects on their personal safety.

84.7%agreed that they “felt safe while the ship was at sea”.

Respondents were asked to name three main COVID-19 related difficulties or challenges they had faced in the last seven days. The answers include:

A frequently mentioned challenge was non-compliance with rules by others with whom crew members interacted. Others mentioned situations when policies were difficult or impossible to implement.

Concluding, you may learn more by clicking on the study herebelow