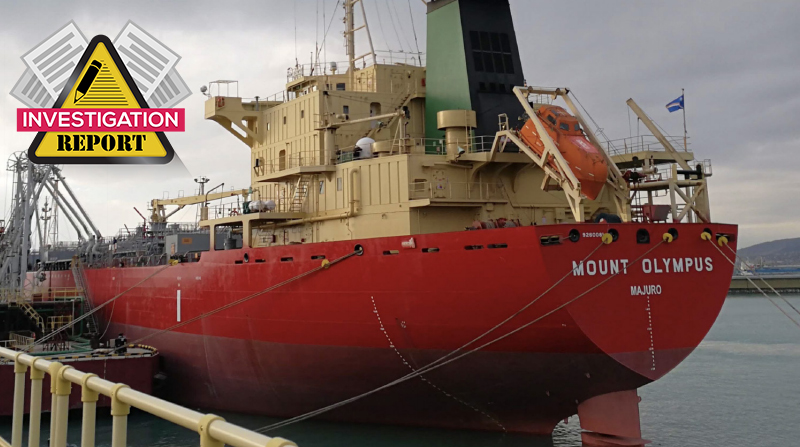 The Republic of the Marshall Islands Maritime Administrator issued an investigation report on the fatality of a Pilot while disembarking a ship and attempting to transfer from the pilot ladder to an escort tugboat off the Port of Tuapse, Russia, in the early morning hours of 30 December 2018.

On 30 December 2018, the Republic of the Marshall Islands-registered oil/chemical tanker Mount Olympus, managed by Systemar Ltd was departing the port of Tuapse, Russia to proceed to sea.

At 0418, a Pilot from the tugboat KAPITAN AVDYUKOV boarded MOUNT OLYMPUS from the jetty on the starboard side.

At about 5.00, the weather conditions recorded were wind Beaufort Force 6 from the southwest.

The tugboat KAPITAN AVDYUKOV approached the ship, and the Pilot began descending the ladder.

According to the local authority’s investigation report, the pilot ladder was well lit by searchlights from both the ship and the tugboat.

At approximately 0510, the Master was standing on the portside bridge wing monitoring the Pilot’s disembarkation. At that time, a large wave forced the tugboat away from MOUNT OLYMPUS’ side.

An OS immediately threw a lifebuoy with light into the water and the Master ordered the main engine to be stopped and initiated a rudder maneuver to swing the MOUNT OLYMPUS’ stern away from where the Pilot had fallen.

The Master also told the port authority of the incident via VHF radio. The Master instructed all available crew members to look out for the Pilot, using the ship’s searchlights. The tugboat turned to try to locate the Pilot.

According to the local investigation report, approximately one to two minutes after the Pilot fell, the deck officer of the tugboat heard calls for help from the Pilot on VHF channel 69 saying “Help, I’m drowning.”

The Pilot was recovered from the water by the tugboat crew after a short time but was later declared deceased. The port authorities instructed the ship to wait in a local anchorage. Later the same day, MOUNT OLYMPUS was cleared to sail.

When the Pilot was lifted out of the water, the life jacket he was wearing was not inflated.

The Administrator’s marine safety investigation determined that the causal factors for the Pilot’s occupational fatality resulted from an accidental fall into the sea. This occurred while he attempted to transfer from MOUNT OLYMPUS’ pilot ladder onto the tugboat’s boarding platform in the dark during poor and deteriorating weather conditions.

According to the forensic report, the Pilot’s death “occurred as a result of drowning in water.” The RMI investigation determined the causal factors that may have contributed to the fatality included:

The causal factors that may have contributed to the incident include:

The Company conducted an internal safety meeting to review the circumstances leading up to the incident in order to determine what might have been done to prevent it and what Preventive Actions could be put in place in the future. Based on this review, the company:

The Federal Transport Inspection Service of the Directorate for State of Maritime and River Supervision in the Russian Federation conducted their own investigation into the incident and have put in place their own Preventive Actions to include:

Following the investigation, the company utilizes this incident as a factual case study in future Bridge Team Management courses and senior crew seminars. It is further recommended that emphasis be given to: 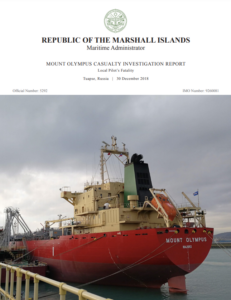