NTSB published its report on the 2018 grounding of a fishing vessel near Point Reyes, California. The five crew of the ship remained on the vessel, until receiving assistance from the USCG. There were no pollution or injuries.

The fishing vessel 'Imperial' started its voyage on November 14, 2018, laying pots, a day ahead of the opening. Working at a rapid pace, the captain did not had enough time to nap. In fact, the report highlights that the captain did not sleep at all in the first 24 hours. Overall, he accumulated 4, 6, and 10 hours of sleep in the first 48, 72, and 96 hours, respectively, before the accident.

On November 19, the captain and crew finished working a line of pots 16 miles west of San Francisco and began sailing to the next crab pots 19 miles away, near Point Reyes, California. The crew slept during that time, while the captain remained in the wheelhouse using the automatic pilot to steer towards two lines of crab pots about two hours away.

After 4 days of harvesting crab, the captain had slept a total of 10 hours, and he recalled crossing the charted “shipping lanes” south of Point Reyes and using a cell phone to talk to another fishing boat captain about each other’s catch. These were the last things he remembered before falling asleep.

The bridge watch alarm, which would sound and flash yellow lights after a preset time had elapsed, was not set. At 0445 local time, the captain woke up by the vessel shaking. He saw the cliffs of Point Reyes in front of him and rocks and white water from the waves and breaking surf around him.

The crew also woke up, while the captain and the engineer assessed the damage, finding water only in the engine compartment. They then entered the flooding compartment, but could not stop the incoming water. The other three crewmembers prepared the survival equipment in case they needed to evacuate the ship.

After the incident, the captain got the vessel out of the surf and off and away from the rocks. The engines were running,enabling the captain to reach speeds of 6 knots, steering the ship further out of the surf for 10 to 12 minutes, before shutting down the engine to prevent damaging it. He then made a mayday call to the US Coast Guard.

A USCG helicopter arrived and deployed a rescue swimmer, while a little later, the Imperial lost electrical power. A USCG motor lifeboat (MLB) also arrived, helping the Imperial crew with dewater the vessel.

​The National Transportation Safety Board concluded that the probable cause of the grounding of the fishing vessel was the captain’s failure to monitor its track, due to falling asleep. The captain had an accumulated sleep deficit after 4 days of continuous operations, while he also decided not to activate the ship’s installed wheelhouse watch alarm.

In addition, the vessel owner’s lack of measures to mitigate crew fatigue and the nature of the derby-style Dungeness fishery in the state of California, contributed significantly to the incident.

See more information on the grounding's report below 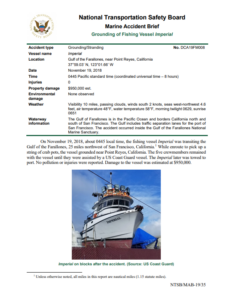