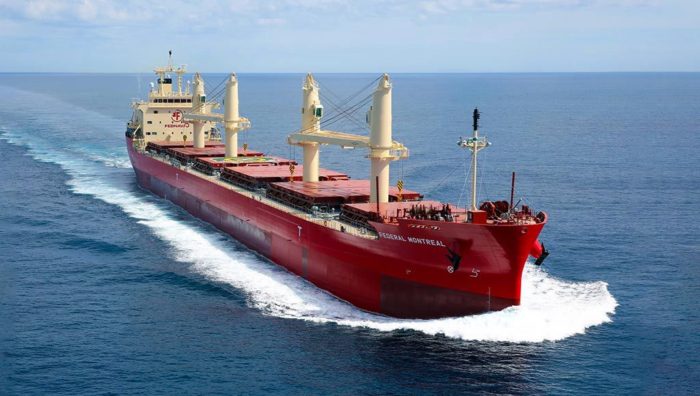 DNV GL partnered with Fednav and Oshima for the launch of the latest 34,500 dwt ice-class handysize bulk carrier Federal Montreal from Oshima Shipbuilding, which represents the industry's ideology about green shipping and sustainability.

Fednav, the Canadian shipowner operates a large fleet of mostly ice-class and ice-breaking bulk carriers in Arctic waters and around the world.

The delivery of Federal Montreal coincided with Fednav's delivery of thier 50th DNV GL-classed vessel in the same year as their 75th anniversary is a fitting demonstration of their commitment to offering the highest-quality services to their customers with innovative and environmentally sensitive vessels.

The three partners highlighted that they share common goals for safety, innovation and quality.

Concerning Federal Montreal,it is also called laker, as its proportions have been specifically designed to navigate the St Lawrence Seaway and the Great Lakes. Lakers, in comparison to the typical bulk carriers, are narrower with a ratio of roughly 9 to 1, which is a challenge when it comes to very careful design considerations.

Federal Montreal will serve international shipping lanes, as well as up the St Lawrence River and the Great Lakes region and is one of six newbuilds contracted to Oshima Shipbuilding as part of Fednav’s vessel replacement programme.

The vessel was designed to emit 30% less GHG in comparison to similar vessels and features an eco-friendly machinery and equipment, including an Optimarin Ultraviolet ballast water treatment system.

Mutual trust and the quality of communication are key to the successful cooperation between Fednav, Oshima and DNV GL ... In companies where this is not the case, there is a lot of fear. I don’t believe in that; I prefer the open-book concept where everybody is treated equally.

The industry has to deal with challenges such as cash flow, where the current rates and earning are insufficient to continue replacing ageing tonnage. A medium-term challenge is to now when and what to build.

Therefore, the partners are now looking at ‘Generation 4’ lakers which will be Tier III-compliant and only consume about 19 tonnes of fuel per day at 14 knots, instead of 29 tonnes of fuel per day like the first-generation lakers constructed 20 years ago. The future vessels will have the same length and beam as their older sisters, but this new design will result in huge savings in fuel costs and emissions.

Following the environmental trend of reducing the carbon footprint, Fednav expressed its commitment on not using open-loop scrubbers and protect marine life from wash water pollution.

Heavy fuel oil in general is becoming a thing of the past; its consumption is likely to be banned in the Arctic before long ... Batteries and fuel cells add significant deadweight and encounter problems at very low ambient temperatures

In addition, Fednav began an experimental liquid hydrogen project in 1990, which although today seem more attention, there are additional challenges that they have to deal with.

The company now is in line with 2020's demand and is compliant with the sulphur limits and ballast water treatment requirements, retrofitting its fleet early to avoid the expected bottleneck towards the end of 2019 when the dry docks were fully booked for scrubber and ballast water installations.