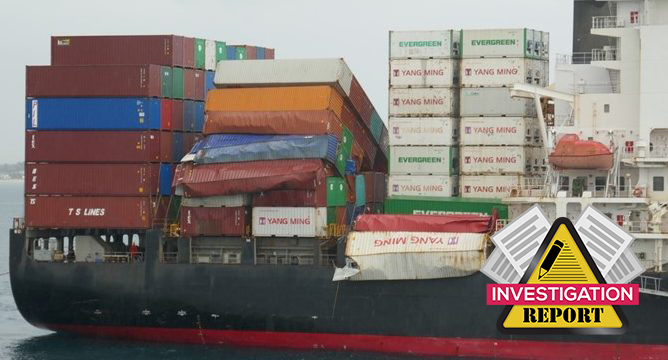 Australian Transport Safety Bureau (ATSB) issued an investigation report on the loss of containers incident involving the container ship YM Efficiency off New South Wales, in June 2018, identifying issues associated with the distribution of containers onboard and the stowage arrangement, thus highlighting the importance of safe and effective container stowage planning.

Weather forecasting, routing and good navigational practices in adverse weather all play a part in minimising the risk of injuries to crew and damage to ship, cargo and environment. However, safe and effective container stowage planning is the primary control measure in managing the risks involved in carrying containers by sea,

At about 0035 on 1 June 2018, YM Efficiency was en route to Sydney, steaming slowly into strong gale force winds and very rough seas off Newcastle when it suddenly rolled heavily.

As a result, 81 containers were lost overboard and a further 62 were damaged. The ship also sustained structural damage to its lashing bridges, superstructure and accommodation ladder.

The ship spent a further 5 days at sea before berthing in Sydney on 6 June.

At the time of publication, searches including remote underwater surveys had identified 66 containers with a few washed ashore or close offshore.

Five containers have been removed with 15 containers yet to be found. The accident resulted in substantial debris washing ashore on New South Wales beaches.

The ATSB determined that the loss of containers overboard occurred because forces generated during the sudden, heavy rolling placed excessive stresses on containers stowed aft of the ship’s accommodation.

This resulted in the structural failure of containers and components of the lashing system, leading to the loss of containers.

All potential causes for the sudden rolling were investigated but there was insufficient evidence to establish a definitive reason for the rolling.

The ATSB found that the weights and distribution of containers in the affected bays were such that calculated forces exceeded allowable force limits as defined in the ship’s Cargo Securing Manual (CSM).

The investigation also identified that the stowage arrangement was not checked for compliance with the CSM’s calculated lashing force limitations during the cargo planning process ashore.

Checking stowage plans for compliance with the Cargo Securing Manual requirements is increasingly achieved through loading computer systems. Notwithstanding the efficiency of computerised loading systems, the scale and pace of modern container ship operations puts significant pressure on ship’s officers to check and amend or approve proposed stowage plans at a late stage,

This left sole responsibility for compliance with these requirements with the ship’s officers, with limited options to resolve deficiencies at a late stage in the process without unduly impacting operations.

Further, the officers did not use the ship’s loading computer system and its lashing calculation program to check if the stowage arrangement complied as they probably did not have an adequate understanding of the system.

In addition, the ship's master and chief mate did not check that the proposed container stowage plan complied with the requirements of the Cargo Securing Manual probably because neither had an adequate understanding of the loading computer system.

The manager's cargo-planning process ashore did not ensure that the proposed container stowage plan complied with the stowage and lashing forces requirements of the ship's Cargo Securing Manual.

Consequently, compliance with these requirements relied entirely on shipboard checks, made at a late stage, with limited options available for amendments without unduly impacting commercial operations.

Shore planners will receive regular training in the principles of cargo loading and securing, container stowage, and the dangerous goods functionality of the computer automated stowage planning software.

A review of loading computer systems in use across the Yang Ming fleet resulted in the adoption of class-specified, route-specific container stowage standards for part of the fleet.

YM Efficiency and the other ships of the same size and type have been equipped with class-approved container stowage planning software systems, with the same software replicated ashore.

In addition, periodic training in the use of the ship’s loading computer system will be delivered to the responsible ship’s officers.

Cargo procedures were also reviewed to ensure that the requirement for lashing forces checks to be conducted, both ashore and on board, was captured.

The safe carriage of containers at sea depends on loading, stowing and securing them in compliance with the ship’s CSM.

Checking stowage plans for compliance with the CSM requirements is increasingly achieved through loading computer systems.

Notwithstanding the efficiency of computerised systems, the scale and pace of modern container ship operations puts significant pressure on ships officers to check and amend or approve proposed stowage plans at a late stage.

In that context, the planning process ashore offers the best opportunity to take all practical measures to ensure that the proposed stowage plan presented to ships officers complies with the CSM and is as safe as reasonably practicable.

Weather forecasting, routing and good navigational practices in adverse weather all play a part in minimising the risk of injuries to crew and damage to ship, cargo and environment.

However, safe and effective container stowage planning remains the primary control measure in managing the risks involved in carrying containers by sea.