Are IMO and EU on the same page with emissions cuts?

The European Commission elected a new President. Ursula von der Leyen, the new President of the European Commission who won MEPs’ votes, has recently presented her ambitious vision for a greener Europe. Namely, Mrs. Von der Leyen urged for immediate climate and environmental action that could transform Europe over the next five years. However, some of her goals contravene those of the shipping industry’s as set by the IMO.

In one of her first moves as the new European Commission President, Ursula von der Leyen shared a 24-page document outlining her ‘agenda for Europe’. The document included “A European Green Deal” as the first of six priorities. While much of the content of von der Leyen’s political agenda has been welcomed by green groups, the fact is that some of her targets are more ambitious than those of the shipping industry.

Ms. von der Leyen urged that Europe must be a leader in tackling climate change and set ambitious targets when it comes to 2030.

I want to reduce emissions by at least 50% by 2030. However, to achieve real impact the world has to move together. The EU will lead international negotiations to increase the level of ambition of other major emitters by 2021

Until then, the new President committed to put forward a comprehensive plan to increase the European Union’s target for 2030 towards 55% in a responsible way.

This plan will be based on social, economic and environmental impact assessments that will ensure a level playing field and advance innovation, competitiveness and jobs.

However, this clearly contradicts shipping’s recent climate goals. As a matter of fact, IMO’s Initial strategy on reducing GHG emissions from ships, mandates that CO2 emissions across international shipping must be reduced by at least 40% by 2030, pursuing efforts towards 70% by 2050, compared to 2008.

As it is understood, the European Commission’s targets are much more ambitious, as they have set a 10% higher limit on emissions reduction for 2030. What is more, IMO wants to peak GHG emissions from international shipping as soon as possible and reduce the total annual GHG emissions by at least 50% by 2050 compared to 2008, while also pursuing efforts towards phasing them out as called for in the Vision as a point on a pathway of CO2 emissions reduction consistent with the Paris Agreement temperature goals.

Again, ambitious as it is, this plan remains at the same level with the European Commission, but with a 20 years delay.

In order to achieve its targets, the European Commision will invest record amounts in cutting-edge research and innovation, using the full flexibility of the next EU budget to focus on the areas with the greatest potential.

We need to tap into private investment by putting green and sustainable financing at the heart of our investment chain and financial system. To achieve this, I intend to put forward a strategy for green financing and a Sustainable Europe Investment Plan

In addition, under this plan, the new President will also suggest to turn parts of the European Investment Bank into Europe’s climate bank.

Currently, the bank is the largest multilateral provider of climate finance worldwide, with 25% of its total financing going to climate investment. She also aspires to at least double this figure by 2025.

For this reason, the Sustainable Europe Investment Plan will support €1 trillion of investment over the next decade in every corner of the EU.

In addition, the new President wants Europe to lead on the issue of single-use plastics.

By 2050, there will be more plastic in the ocean than fish. We need to get serious about how we turn the tide. European legislation already applies to the ten most found plastic items on European beaches. I want to open a new front in our fight against plastic waste by tackling micro-plastics 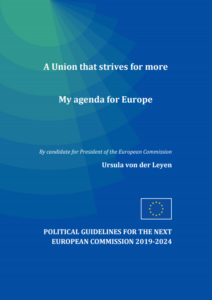 Subject to amendment based on reviews to be carried out by the IMO, the Initial Strategy identifies levels of ambition for the international shipping sector noting that technological innovation and the global introduction of alternative fuels and/or energy sources for international shipping will be crucial to achieve the overall ambition.

For this reason, the IMO has set short, mid, and long term measures to achieve these goals.

Some of the short-term measures include the following:

The following measures are possible mid-term further action of the IMO, regarding issues related to the reduction of GHG emissions from ships:

Of course, the IMO has established long-term measures as well, which can be summarized as: 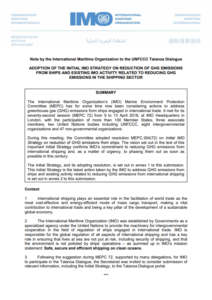 In conclusion, even though there are gaps as far it concerns final deadlines and anticipated reductions, it is important that both IMO and EU have made their plans to address climate change. However, further discussions are vital from both sides to address effective ways and find a middle ground on the issue.