Port of Rotterdam to supply Europe with 4.6 megatonnes of hydrogen by 2030 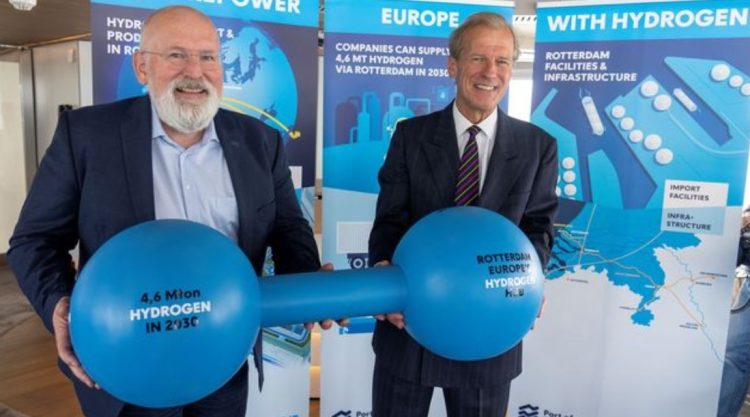 The port of Rotterdam announced that it can supply, in collaboration with other companies, Northwestern Europe with 4.6 million tonnes of hydrogen annually by 2030.

The consumption of 4.6 million tonnes of hydrogen yields 46 million tonnes of CO2 reduction, and it increases Europe’s energy independence. This hydrogen amount is the total the Port of Rotterdam Authority has come up with on the basis of specific projects and realistic plans, which companies and exporting countries are now working on.

On behalf of some 70 companies and exporting countries, the Port of Rotterdam Authority has made European commissioner Frans Timmermans this offer of getting off to a flying start with the hydrogen economy. The plans and projects represent a concrete implementation of the heightened European ambition: within the context of REPowerEU, a fourfold increase is envisioned in the production and import of hydrogen compared to the ‘Fit for 55’ package (from 5.6Mt to 20Mt). This hydrogen could then be used for ensuring the sustainability of society, in particular as fuel and feedstock for transport and industry.

Using sustainable hydrogen substantially contributes to the European objectives of reducing climate change and increasing Europe’s energy independence. With the production and import of renewable and low carbon hydrogen we build a sustainable future

…says Allard Castelein, CEO of the Port of Rotterdam Authority.

According to the 70 parties that endorse the offer, two preconditions are crucial to get the hydrogen economy underway. The first is hydrogen certification: green hydrogen imported from outside Europe has to be certified as green here. The second precondition is closing the financial gap between the use of renewable and low carbon hydrogen and its derivatives compared to their current CO2-emitting alternatives. This is because as long as energy made from fossil fuels is cheaper than sustainably produced energy, the latter will not get the momentum required for achieving the European objectives.

As informed, hydrogen is an alternative for oil and natural gas as energy and as raw material. Many companies are working on projects to produce hydrogen in Northwestern Europe with green power or to do this at locations with more sunshine, wind and space. Countries all over the world are preparing for these new energy flows. Hydrogen made in Latin America or Australia for instance, can be shipped to Rotterdam efficiently and on a large scale, processed here, and then be transported to the hinterland.