In fact, ECSA has already expressed its support on the proposed EU Green Deal. Now, the Association launched its position paper as a policy response of the industry towards the European Commission’s ambitious EU Green Deal.

Specifically, the newly-launched document welcomes and supports EU's ambition to tackle climate change and become an active contributor to the IMO discussions on both short-term and long-term measures, and seeks the EU’s support for a coordinated and holistic approach at the UN body.

The shipping industry is fully committed to eradicating its GHG emissions completely as soon as possible in this century as in line with the ambitious targets agreed for the sector by its global regulator, the UN International Maritime Organisation.

In response to the EU Green Deal, the industry lays down 8 points where the EU can do together with the shipping industry:

Concluding, it should be reminded that along with the reveal of the European Green Deal, which Ursula von der Leyen announced on the sidelines of the UN Climate Conference (COP 25) underway in Madrid, it was announced that in March 2020 the Commission will propose the first-ever European Climate Law to make the transition to climate neutrality irreversible. 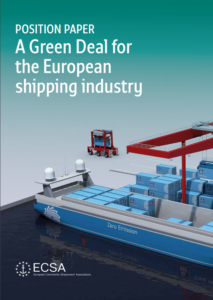 "A Green Deal for the European shipping industry"