The newly elected President of the COP 25 in Madrid, Carolina Schmidt

COP 25 opens in Madrid to push work against climate change

The 25th UN Climate Change Conference (COP 25) opened on Monday, 2 December, in Madrid, Spain, aiming to take the next crucial steps in the UN climate change process. Following agreement on the implementation guidelines of the Paris Agreement at COP 24 in Poland last year, a key objective is to complete several matters with respect to the full operationalization of the Paris Agreement.

The world must stop a “war against nature” and find more political will to combat climate change, UN Secretary-General Antonio Guterres noted on Sunday, at pre-COP25 press conference.

Feelings at the last year's session were mixed as negotiations initially showed they would not end up in some tangible results for the future of the planet, but governments eventually adopted a robust set of guidelines for implementing the landmark 2015 Paris Agreement, literally on the edge of time, as the negotiations went overtime. 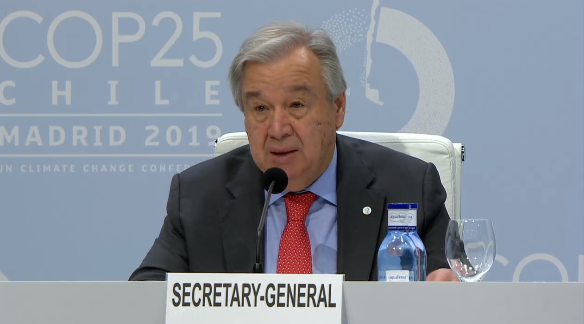 The last five years have been the hottest ever recorded, sea levels are the highest in human history, ice caps are melting at unprecedented speed, climate-related natural disasters are becoming more frequent and more deadly, while every year, air pollution, associated to climate change, kills seven million people, noted Mr. Guterres to argue that climate change is no longer a long-term problem, but a global climate crisis.

In this respect, he stressed importance for governments not only honour their national contributions under the Paris Agreement, but the need to substantially increase their ambition.

Today, we need to reduce emissions by 7.6 % each year. So, it is imperative that governments not only honour their national contributions under the  Paris Agreement, they need to substantially increase their ambition.

The cuts that have been agreed so far under the Paris agreement are not enough to limit temperature rises to a goal of between 1.5 and 2 degrees Celsius (2.7-3.6 Fahrenheit) above pre-industrial levels.

But let’s be clear. Until now, our efforts to reach these targets have been utterly inadequate. The commitments made in Paris would still lead to an increase in temperature above three degrees Celsius. But many countries are not even meeting those commitments,

President Donald Trump for his part has started withdrawing the US from the Paris Agreement, while the deforestation of the Amazon basin - a crucial carbon reservoir - is accelerating and China has tilted back toward building more coal-fired power plants.

Seventy countries have committed to a goal of ‘carbon neutrality’ or ‘climate neutrality’ by 2050, but Guterres said these pledges were not enough.

These remarks come in line with the latest Intergovernmental Panel on Climate Change (IPCC) Special Report in September, highlighting the urgency to prioritize timely, ambitious and coordinated action to address unprecedented and enduring changes in the ocean and cryosphere.

The report also revealed the benefits of ambitious and effective adaptation for sustainable development and the increasing costs and risks of delayed action.

The technologies that are necessary to make this possible are already available. The signals of hope are multiplying. Public opinion is waking up everywhere. Young people are showing remarkable leadership and mobilization. More and more cities, financial institutions and businesses are committing to the 1.5 -degree pathway...What is still lacking is political will. Political will to put a price on carbon. Political will to stop subsidies on fossil fuels. Political will to stop building coal power plants from 2020 onwards. Political will to shift taxation from income to carbon - taxing pollution instead of people.