Transport Malta issued an investigation report on a serious injury to a crew member in the grey water tank of MV LA SOLOGNAIS while underway in December 2019. The report revealed that a wiper, who entered the vessel’s grey water tank, suffered from the effects of possible hydrogen sulphide inhalation.

In the morning of 26 December 2019, whilst La Solognais was at sea, the second engineer and the wiper were assigned to clean and inspect the vessel’s grey water tank. The atmosphere inside the tank was measured, following which, the tank was washed.

The wiper entered the tank and, on reaching its bottom, fell unconscious. He was immediately rescued by the crew members, and first aid was administered.

About two hours later, the vessel was diverted to the nearest port where the wiper was evacuated and transferred to a hospital ashore. Tests at the hospital revealed that the wiper had suffered from the effects of possible hydrogen sulphide inhalation.

Following the accident, the company: 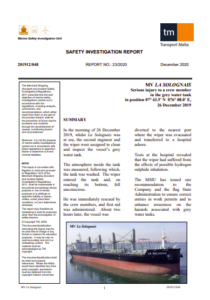