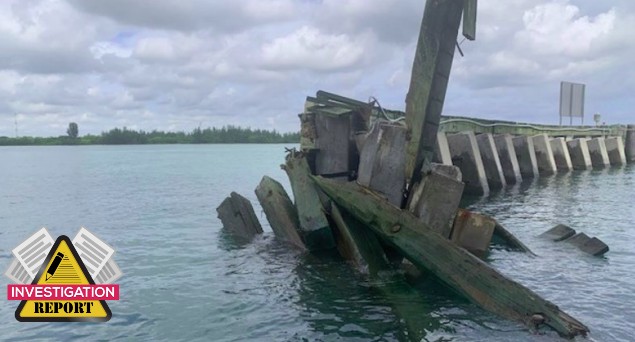 Postaccident damage to the eastern fendering of the bridge looking to the north / Credit: USCG

NTSB issued an investigation report on the contact of the towing vessel Old Glory and its barge with a bridge in Indian River, Florida, in August 2020. The incident stressed the importance of checking the Coast Pilot and charts when developing voyage plans to improve knowledge of an area and prepare for a safe passage.

There were neither injuries to the four crewmembers on the Old Glory, nor pollution reported. Damage to the barge was estimated at $5,000. Damage to the protective fendering was $641,000.

​The National Transportation Safety Board determines that the probable cause of the contact of the towing vessel Old Glory and barge Cole with the Peter P. Cobb Memorial Bridge protective fendering was an inadequate navigational assessment that did not identify the risk of strong cross-currents in the area of the bridge transit.​

Both the US Coast Pilot and navigational charts had information on “strong cross” and “extremely fast” currents in the area of the Peter P. Cobb Memorial Bridge, NTSB stressed.

Although the relief captain acknowledged the available navigational information on the vessel’s ECS and in the United States Coast Pilot publication, he did not use all the resources available to him,

Towing vessel regulations require the officer of a navigational watch to conduct a navigational assessment, using all resources available to gather information on conditions that could impact the safety of navigation, such as the velocity and direction of currents, bridge transit clearances, and any other special conditions.

Had the relief captain been aware of the cautionary note and information contained in the United States Coast Pilot, he would have been better prepared to address the risk of strong currents often seen near the Peter P. Cobb Memorial Bridge,

The Coast Pilot and navigational charts are valuable sources to mariners that contain amplifying information on local conditions such as tides and currents, channel characteristics, and bridge descriptions. It is important to check the Coast Pilot and charts when developing voyage plans to improve knowledge of an area and prepare for a safe passage.