British charity Apostleship of the Sea issued their Life at Sea report detailing cases they have encountered while providing support to seafarers around the world in 2017-2018. These stories, summarizing the eight challenges that crews of today have to face, aim to demonstrate that, by working in partnership, we can all improve the lives of seafarers and fishermen around the world.

Together, we can improve welfare through regular ship visits, and help seafarers through what may be the most difficult times of their lives...These stories demonstrate the vital importance of our work – and show that, by working in partnership with you, we can all improve the lives of seafarers and fishermen around the world, 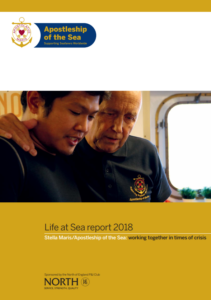