by The Editorial Team
in E-navigation, Regulation

For autonomous shipping to gain regulatory and societal acceptance, this technology must be at least as safe as traditional ships, said the UK P&I Club in a new paper. A successful approach to change would be to develop regulations in tandem with technological advancements, always maintaining the focus on the safety of people and property at sea, but this may not always be possible.

In this regard, through a Legal Briefing on autonomous ships issued in July, the UK Club cites the most major issues surrounding the adoption of autonomous shipping:

IMO’s MSC 99 last year established the following four degrees of autonomy for the purpose of the Committee’s scoping exercise:

UNCLOS defines that all ships must be “in the charge of a master and officers who possess appropriate qualifications”. SOLAS, MARPOL, STCW and the Paris MoU as well as the EU directive 16/2009 on PSC all presume that the master will be present onboard.

It is expected that all ships will be capable of executing manoeuvres and steering in accordance with the basic rules of navigation as prescribed by the COLREGS.

4. Issues of seaworthiness and error in navigation:

Section 39 of the Marine Insurance Act 1906 as amended contains an implied warranty that the vessel is “reasonably seaworthy in all respects”. This warranty applies to voyage policies of marine insurance at the commencement of the voyage. Under the Hague Visby Rules, to be seaworthy, the ship must be properly manned, among others.

Autonomous ships are highly dependent on computers and other robotic equipment, which could exacerbate the consequences of a cyber attack. If there is no crew onboard, there will be no possibility of physically overriding remote or autonomous control.

6. Issues of liability and its limitation:

Generally, civil liability in shipping is regulated nationally, and it can be said that most jurisdictions require a fault-based standard.

For ships with a degree 3 or 4 autonomy, the challenge would be to try and determine human fault when ships are navigated without any real-time human intervention, relying only on pre-programmed algorithms operated by AI or by remote operators.

The only place(s) where human fault could be assessed would be in connection with a failure of remote operators to monitor or take intervening action or of the shipowner to keep necessary software up to date, maintain the same or possibly in choosing the vendor of the software. 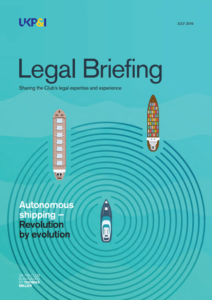