The International Council on Clean Transportation (ICCT) in its latest report focused on the CO2 reduce emissions issue, by limiting engine power. The study shows that shipping Green House Gas (GHG) emissions have been reduced by 30% during a ten-year period from 2008 to 2018.

With the IMO working towards to achieve shipping's decarbonization, technical practices to limit engine power proved to have limited impact on reducing CO2 emissions, ICCT reported.

According to the study, engine power limitation (EPL) is a semi-permanent, overridable limit on a ship’s maximum power that could reduce fuel use and CO2 emissions, if only it reduces the operational speeds of affected vessels.

The authors find that CO2 reductions are not proportional to engine power reductions because ships are already operated well below their maximum speeds and therefore engine powers.

With the climate target for 2030 already three-quarters met, the overcapacity in ship transport supply resulted ship speed to drop by 20% among 2008 and 2015. 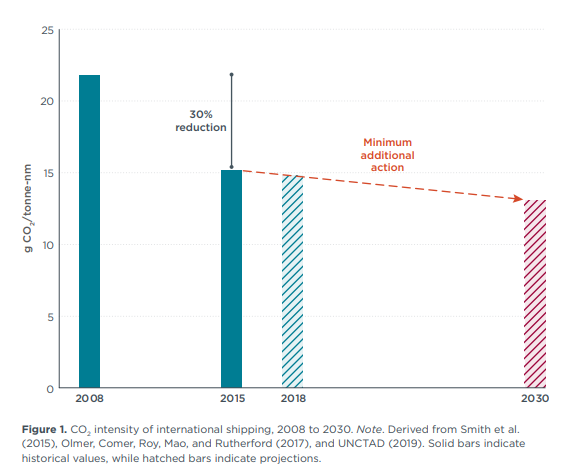 Based on 2018 ship operations, EPL practices did not delivered meaningful CO2 emissions reduction, while a 30% EPL is expected to drop CO2 by 2% for container vessels and oil tankers, and 3% for bulk carriers.

EPLs of 30% or less would reduce fuel use and CO2 emissions by 1% or less, while the maximum 60% EPL scenario would cut emissions by about 6%. By comparing a Base scenario with a High Speed scenario, the authors find that EPLs of 30%+ in 2030 could help lock in the fuel savings of existing slow steaming practices by constraining future speed increases.

Moroever, larger limitation of 50%+ could bring more meaningfully reduce ship CO2 by 8%–19% depending on the ship type and its size. 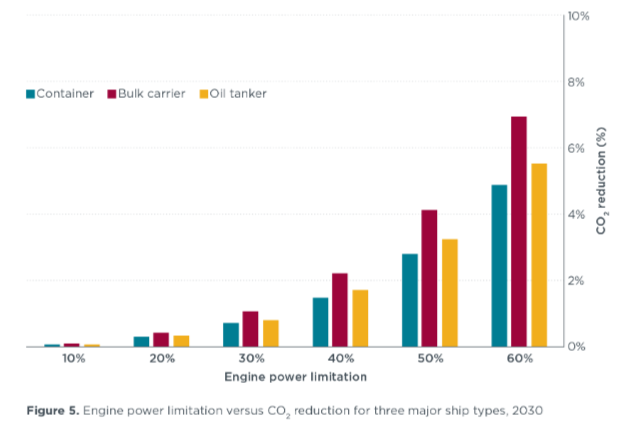 Concluding, the report urges the need of IMO to adapt a more tough 2030 target, while IMO is expected to revise the strategy in 2023. "When the strategy was agreed upon, an estimated 30% reduction had already been achieved due to widespread slow steaming by ship operators. This suggests that the 2030 goal may be tightened when IMO revises the strategy in 2023" the report highlighted.

You may see more herelebow 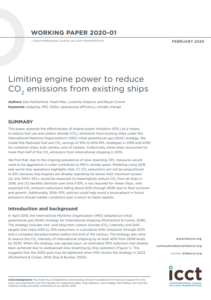