How the EU Emissions Trading System may help shipping decarbonize

As the report highlights, without maritime transport, trade as we know it would be impossible. Shipping is the most cost-effective way to transport goods and raw materials around the globe in large quantities, explaining why about 75% of the EU’s external trade and 36% of intra-EU trade is seaborne.

Yet, shipping’s overall ecological footprint and impact on the world’s oceans remains significant, despite progress recorded in past decades. In fact, international shipping accounts for around 2-3% of worldwide CO2 emissions. That is roughly equivalent to Germany’s output, the world’s sixth largest CO2 emitter. The IMO also estimates that these emissions could increase by 50-250% by 2050 if no action is taken to cut them.

What is more, the maritime transport sector is often perceived as having ‘side-stepped’ some of the most important measures taken to reduce harmful emissions.

For instance, similarly to aviation, maritime fuel continues to go largely untaxed. But, contrary to air transport, shipping is not covered by the EU’s emissions trading scheme

For this reason, the President-elect of the European Commission Ursula von der Leyen has made clear that the EU is ready to expand the level of ambition even further. Indeed, every transport mode will have to play their part if the EU is to achieve its ambitious target of climate neutrality by 2050. That is why, in her political guidelines, she recommended to include maritime transport under the EU’s Emissions Trading System.

This proposal aims to provide a strong incentive to reduce, and even reverse, the price differential between conventional and sustainable fuels, giving a strong market signal in favour of decarbonisation and encouraging the adoption of carbon-neutral technologies on a large scale.

What is the ETS

The EU Emissions Trading System is part of the EU’s policy to combat climate change and constitutes the biggest emissions trading system in the world.

Under the EU ETS, a cap is set on the total amount of certain greenhouse gases that can be emitted by installations covered by the system. The cap is reduced over time so that total emissions fall.

Within the cap, companies receive or buy emission allowances which they can trade with one another as needed. They can also buy limited amounts of international credits from emission-saving projects around the world.

After each year, a company must surrender enough allowances to cover all its emissions, otherwise heavy fines are imposed.

If a company reduces its emissions, it can keep the spare allowances to cover its future needs or else sell them to another company that is short of allowances.

However, there is a lack of feasible, commercially available and relatively affordable climate-friendly alternatives, which increases the risk that the Emissions Trading System remains limited to a carbon offsetting scheme. This means that shippers will pay for the right to emit, instead of decarbonising. As the report says, the current trend towards ‘slow steaming’ is indicative of this aspect, as by reducing its speed by just 10%, a ship can decrease greenhouse gas emissions by as much as 27%, without having to change fuels or vessels.

In addition to providing clear and coherent long-term policy and regulatory signals, the EU must recognise the need for supporting measures to accelerate the shift away from conventional fuels and incentivise a rapid transition to climate – and environmental – neutrality

Therefore, the Emissions Trading System aspires to provide revenues, which can be reinvested in research and innovation activities. These activities would advance the development of much-needed climate-neutral innovations.

However, EPSC warns that this should not be a substitute for funding for maritime research and innovation under Horizon 2020, which at €350 million is relatively limited, when considering the future challenges. It urges that the investment must be even more ambitious under the EU’s Horizon Europe Research and Innovation Programme for 2021-2027. Additionally, the next Connecting Europe Facility, and the Sustainable Europe Investment Plan proposed by President-elect Ursula von der Leyen, must back deployment actions.

For their part, the EU should help steer markets towards alternative fuels by providing clear criteria in public tenders. By increasing production and distribution of alternative fuels, their commercial viability comes one step closer.

Finally, the EU should investigate other regulatory or soft measures to give more incentives to ports to adopt green measures, such as ships switching to shore electric power when at dock, instead of their own fuel-powered generators. 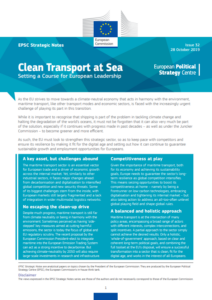