Several days ago, the U.S. Coast Guard informed that saved five people from a fishing boat which was about to capsize, approximately 14 miles southeast of the Golden Gate Bridge. Specifically, the fishing vessel named as "Mady Jane", unexpectedly started to taking on water.

To take control of the emerge situation, the fishing vessel's captain made a mayday call via the VHF radio, at approximately 4:45 p.m, noting the Coast Guard Sector of San Francisco that the vessel was taking on water. 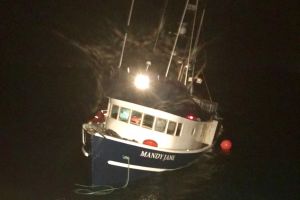 In light of the situation, the Coast Guard of San Francisco with the aid of Coast Guard Station Golden motor lifeboat crew and the Coast Guard cutter Sockeye, immediately acted in order to rescue the five people that were onboard.

Emergencies at sea can happen very quickly and are often far from help.

At the same time, the Coast Guard Air Station San Francisco MH-65 Dolphin helicopter crew was also sent to respond. The helicopter crew searched the fishing vessel and discovered that four of its crew members had already abandoned the ship and embarked into a life raft, while the captain had remained onboard in his post.

Minutes later and after the helicopter crew landed on the scene, a San Francisco pilot boat along with a tugboat and a good Samaritan vessel arrived on scene to aid for the rescue operation.

The preparation and steadfast thinking of the captain and crew of the Mandy Jane to call for help, don survival suits and deploy their life raft positively saved their lives. We are also grateful for the Good Samaritan, tug and pilots who quickly responded to Mandy Jane’s calls for help.

The helicopter crew further sent a rescue swimmer, who helped the crew members climb aboard the 47-foot Motor Lifeboat.

With their quick response, the proactivity of the crew and the efforts of our Coast Guard rescue crews, we were able to safely recover the people from this dangerous situation.

For the records, the 1973-build "Mandy Jane" is a small commercial fishing ship located out of Alameda.

Concluding, sinking vessels are a common seen phenomenon, the Coast Guard made its statement, reminding all mariners, recreational and commercial to make sure and check that their vessel is armed with the proper safety equipment before they go out on the water.