NTSB investigation: Captain did not return to port despite forecast, vessel sank

The National Transportation Safety Board (NTSB) issued a Marine Accident Brief on the flooding and sinking of the fishing vessel 'Aaron & Melissa II' while 70 nautical miles southeast of Portland, Maine, in November 2018. The key cause of the sinking was a combination of the Captain's decision to proceed in heavy weather and of a clogged bilge system.

About 0800 local time on 14 November 2018, the fishing vessel Aaron & Melissa II sank approximately 70 miles southeast of Portland, Maine, after it flooded while transiting to fishing grounds during a storm with gale-force winds.

All four crew members abandoned ship and entered an inflatable liferaft when attempts to dewater the vessel proved unsuccessful.

They were later rescued by a US Coast Guard helicopter.

One deckhand received minor injuries. Approximately 3,000 gallons of fuel and lube oil were discharged. The loss of the vessel was estimated at $650,000.

Petty Officer Michael Kelly received the 2019 IMO Award for Exceptional Bravery at Sea during this year's IMO Awards ceremony, on 25 November, for rescuing four survivors from a life raft in this accident.

NTSB determines that the probable cause of the flooding and sinking of the fishing vessel Aaron & Melissa II was the captain’s decision not to return directly to port with forecasted gale-force conditions, combined with the clogged bilge system, which prevented the crew from dewatering the flooded lazarette.

The entire crew was aware of the forecasted weather. Before heading into the Port of Gloucester to unload the catch, the captain decided to head west to check one more fishing spot located northeast of Gloucester. He stated he was not concerned about the weather and therefore planned to deploy nets the next day to fish if the weather was acceptable.

NTSB noted that none of the crew members, except for the captain, had a significant amount of sleep before they discovered the vessel was taking on water during the height of the storm. The senior and junior deckhands and the engineer had only 2.5 to 5.5 hours of sleep in the previous 48 hours before the accident.

In addition to their limited sleep, the nature of their work and the challenging weather conditions likely caused them to be physically exhausted, although the crew continued with their attempts to save the vessel.

Additionally, the captain stated that he had tried to use the saltwater/bilge pump to remove water from the lobster tanks and lazarette. Although the pumps would initially work, the crew found that they could not maintain suction, which the captain attributed to the valve to the engine room bilge being left open.

Based on the captain and crew’s descriptions, the saltwater/bilge system started to show the effects of a clog prior to the vessel encountering the storm.

Most likely, the piping system was clogged before the manifold, which prevented all three pumps from being able to dewater the lazarette and the lobster tanks.

The captain and crew told investigators that in addition to the lobster tanks being used to trim and ballast the vessel, they were used to store equipment, including twine.

Over time, the twine could have become loose in the tanks and sucked into the bilge piping, consequently clogging the suction line of the bilge system.

In addition, the movement of the vessel in sea conditions also could have caused sediment and/or debris to be sucked into the bilge line, preventing the pumps from operating.

During the January 2018 drydock, the rudder post packing gland in the lazarette had been repacked due to excessive leakage, and a doubler plate was welded to the hull below the waterline and forward of the rudder post to cover an area of through-hull wastage.

Since water was discovered in this space both prior to and during the storm, the repairs possibly failed, or a new cause of the water ingress occurred.

According to the captain, water most likely entered through the rudder post packing gland in the lazarette, which accelerated when the lobster tanks were full, thus increasing the gland’s leakage rate as the stern trimmed further down in the water.

Although the lazarette’s high-water bilge alarm float switch tested satisfactorily prior to departure, the crew did not report hearing the alarm at any time during the return transit.

Its apparent failure prevented the crew from being warned earlier of the water ingress.

The gale the Aaron and Melissa II encountered was accurately forecasted.

The captain was aware of the approaching storm and its potential gale-force strength but decided nevertheless to head to another location to fish, instead of returning directly to Gloucester, which put the vessel at risk.

The gale-force storm and sea conditions damaged the stern gates and flooded the lobster tanks, fish holds, and lazarette, leading ultimately to the Aaron and Melissa II sinking and endangering its crew.

In addition, critical systems such as the high-water bilge alarm (float switch) within the lazarette and the saltwater/bilge system were not fully operational likely due to fouling, which also decreased the survivability of the vessel. 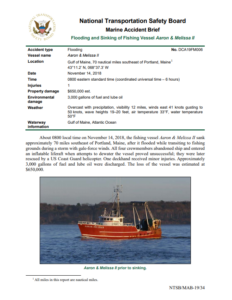