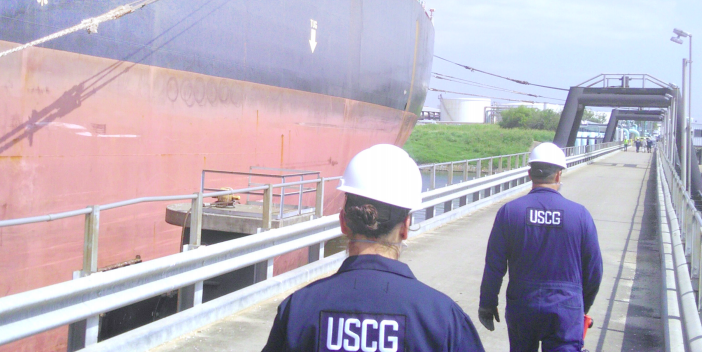 Above image is used for illustration purposes only / Credit: USCG

A total of 57 ships were detained in the US in 2020, marking a decrease in the annual ship detention rate from 1.10% to 0.77%, the USCG said in its PSC Annual Report for 2020. While ship detentions related to fire safety and lifesaving systems remained similar to the past few years, MARPOL Annex I deficiencies decreased in the last year, the report reveals.

A total of 57 detentions made the annual detention rate at 0.77% with the three-year rolling average detention ratio coming in at 1.02%. The total number of ships detained in 2020 for environmental protection, safety, and security-related deficiencies decreased from 102 to 57, the data reveals.

Our data this year shows that fire safety, safety management systems, and lifesaving were the leading cause for detentions,

SMS deficiencies evidenced by multiple uncorrected material and/or operational deficiencies are often the most cited. The most common SMS deficiency is where the crew failed to implement the SMS as it relates to the maintenance of the ship and equipment. SMS-related detentions usually resulted from the failure of the master and or crew to report non-conformities to the company. Expanded ISM exams also turned up instances of logs not accurately reflecting the condition of lifesaving and firefighting equipment.

In one case, the master provided documentation of regular testing of the ship’s water spray system despite the PSCO observing several nozzles that were corroded and clogged. During another exam, despite the ship’s records indicating weekly checks were performed on the low-pressure CO2 system, the PSCO identified a valve on the service line left in the open position with no blanking flange.

Any release of CO2 from the system would have immediately caused that space to fill with CO2 and present a danger to life.

The prevention of fires onboard ships remains an area of particular concern for our PSC program. Deficiencies related to oil-soaked lagging coupled with excessive fuel leaks were the most common cause of detentions in areas under fire safety. Several deficiencies related to fixed firefighting installations were also observed.

During one exam, the PSCO noted all five of the vessel water mist system discharge valves in the closed position. Although the system was in automatic mode, in the event of a fire, the closed valves would not have supplied fire-fighting water as designed. On another ship, rags were found stuffed into all of the sprinkler heads of the fixed water sprinkling firefighting system in a paint locker.

There were also several issues related to the operation of the ship’s fire pumps. In one case, each of the ship’s required fire pumps were not able to deliver the required two jets of water due to malfunctioning impellers. The ship had to run both pumps simultaneously to supply enough pressure.

In the first case, the crewmember provided evidence of modifications to the oily water separator piping system, which allowed oily waste to bypass the system and be pumped directly overboard. In the second case, the crewmember demonstrated how the bilge piping arrangement was modified, including the hand wheel on the bilge isolation valve. The modifications allowed the valve to open without breaking the tamper seal. Officers on both ships were subject to criminal investigations for illegally discharging oil waste.

Overall, detainable deficiencies related to lifesaving systems have remained steady over the years accounting for less than 10% of the total.

Deficiencies related to rescue boats and lifeboats generally lead this category most due to them not being ready for immediate use.

During one exam, the PSCO observed six to eight-inch-long cracks along the bow, center, and stern sections of the upper rails due to contact with the davits in both port and starboard lifeboats. On another ship, 30 of the ship’s 31 immersion suits were taken out of service due to their poor condition. 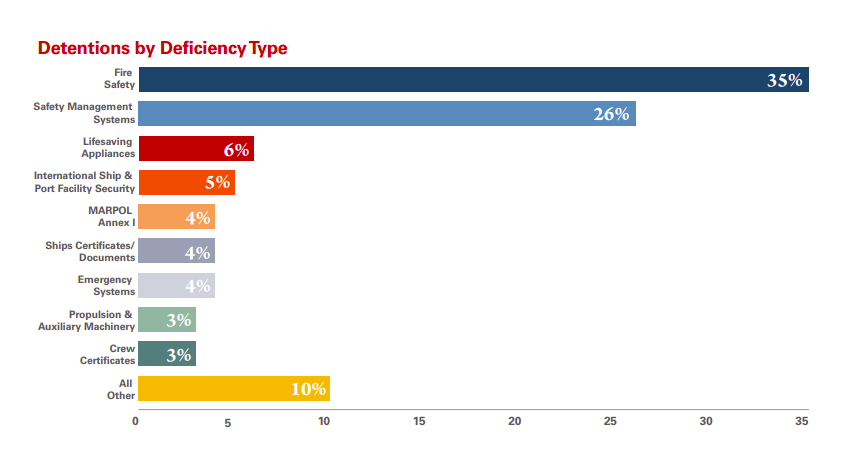